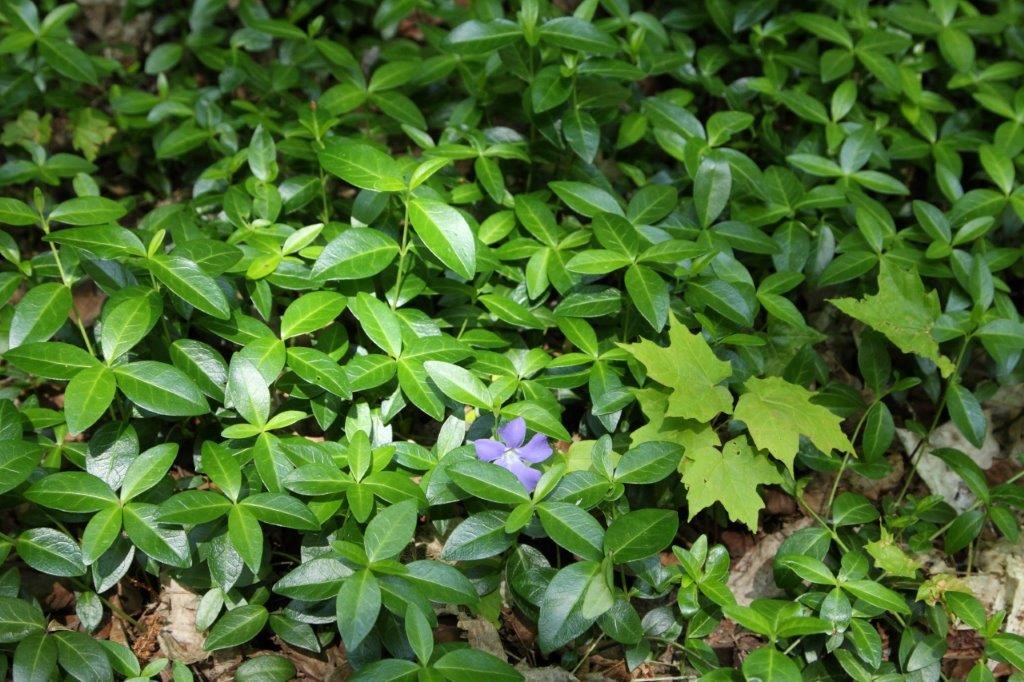 General Information: Periwinkle is a common non-native plant that is often used as groundcover. It is native to the Mediterranean basin and was introduced to North America as an ornamental plant. It easily escapes cultivation and is considered highly invasive. Periwinkle, like many other invasive plants, reproduces through vegetative propagation, where new plants grow from the roots of an original plant. Periwinkle poses a threat to biodiversity because it spreads over large areas and competes with native plant species in a number of habitats. It can grow in a variety of light and moisture regimes, but can thrive in low-light and high-moisture conditions which makes Periwinkle particularly damaging to plant communities in the forest understory. Periwinkle is still sold at some plant nurseries, so this is an existing source contributing to the invasion of this plant across the province.

Identification: Periwinkle leaves are dark green and shiny in appearance, and grow opposite on the stem. It has violet to purple flowers with 5 petals that appear in early spring. It has a slender stem that can grow over a meter along the ground but often not more than 15 cm tall.

Control: The most effective effort in preventing the spread of this plant is to be able to identify it and not introduce it to new areas. Periwinkle can be controlled by digging or pulling the plants out, as long as all aboveground vegetation and roots are removed.  Some situations may require herbicide treatment for successful eradication; contact Ontario Parks for further information.