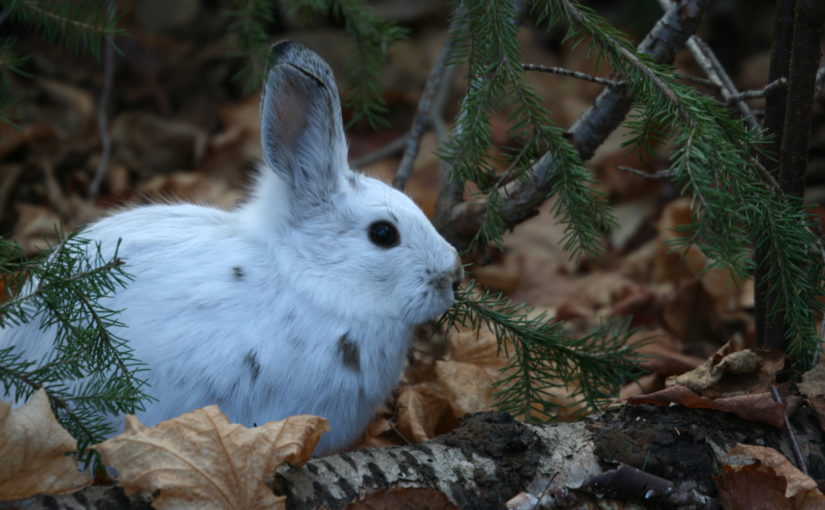 If Canada is known for one thing, it’s for our long, cold winters.

Wild animals rely on evolution and natural adaptations to survive until spring. The strategies they’ve developed are varied and, simply, incredible.

Turtles: life at the bottom of the lake

Normally, turtles use their lungs to breathe. However, they spend their winters submerged at the bottom of frozen lakes and ponds.

So how do they get the oxygen they need?

See, a turtle’s body temperature changes with its environment. At the bottom of a lake, the temperature can drop to as low as 4ºC. This causes a turtle’s metabolism — and, in turn, its need for energy and oxygen — to plunge.

Turtles can therefore get the small amounts of oxygen they need through a process called “cloacal respiration.”

Simply put, they breathe through their rear ends.

The skin there is soft and thin, and naturally exchanges oxygen and carbon dioxide with the water.

However, sometimes oxygen levels under a frozen lake are reduced. In these situations, some turtles can switch to a type of metabolism (anaerobic respiration) that doesn’t use oxygen at all.

This can be dangerous because it causes a buildup of lactic acid, but some turtles, like Snapping Turtles, are even able to neutralize this using the calcium in their shells.

According to the myth, if a Groundhog sees its shadow on February 2, it means another six weeks of winter. That may not be true, but what is interesting about Groundhogs is that they’re one of Canada’s few true hibernators.

When winter approaches, Groundhogs retreat to burrows below the frost line, and enter a long period of inactivity. Their body temperature drops from 35ºC to 6ºC, and their heart rate plummets from 100 beats per minute to only 15 beats per minute. They breathe only once every five to six minutes.

Through this time, they survive off stores of fat, and their overall body mass may be cut in half.

Monarch Butterflies may get all the attention for their seasonal flight down south, but Common Green Darner dragonflies have a similar way of dealing with the winter: leaving it altogether.

In fact, the Green Darner’s migration pattern resembles the Monarch’s in many ways. Just as Monarchs make their trip over several generations, Green Darners spread theirs over three.

Around February, a first generation of Green Darners in Texas or Mexico will start flying north, where they lay their eggs in ponds and then die. When the new generation hatches, some will fly south in the same year, while some overwinter in the north as nymphs.

The dragonflies that go south will also lay their eggs and die, giving way to a new generation that will spend their entire lives living in the south. Then, the cycle continues.

The Isabella Tiger Moth, better known as the Woolly Bear, is unusual in that it overwinters as a caterpillar. These caterpillars hatch in the fall and feed late into the season before taking shelter under logs and piles of leaves to stay warm.

Still, even under all that insulation, temperatures can reach below freezing. For the average caterpillar, this would be a death sentence. Woolly Bears, however, produce an antifreeze in their blood called glycerol. With this, they can reach temperatures as low as -8ºC without damaging any cells.

When spring finally arrives, the caterpillars thaw out before continuing to feed for a few weeks. Then, in late spring, they pupate before turning into beautiful moths.

Like Groundhogs, five of Ontario’s eight bat species hunker down for the winter to hibernate (the other three migrate south). Their metabolism, heart rate, and breathing all decrease during this time.

Unfortunately, an introduced disease called White-nose Syndrome is putting hibernating bats at risk. It’s a white fungus that spreads over the bats’ faces and wings, irritating them, and waking them up early. While awake, they use crucial stores of fat meant to help them survive the winter.

Parks, including Pinery Provincial Park, are conducting extensive research on this threat.

Snowshoe Hares are aptly named: their huge hind feet provide them a large surface area, just like a snowshoe, which allows them to move quickly over the snow and escape predators.

But that isn’t their only winter adaptation. Other than the tips of their ears, Snowshoe Hares turn completely white, helping them blend in with their snowy surroundings. Receptors in their eyes, which are sensitive to day length, register the time for colour change.

As daylight diminishes and winter approaches, the receptors trigger reductions in the production of the pigment melanin, which gives the hare’s skin and fur their dark colour. This turns the fur into a natural snowy camouflage. Good luck spotting them now!

These are only a handful of examples of the adaptations that animals in Ontario use to survive the winter.

Did you know that Black Bears can actually give birth during their hibernation process? Or that birds like ducks, geese, and swans can avoid heat loss by cooling the blood sent to their feet?

But of all the ways animals survive the winter, frogs might be the most interesting. Check out our full article on them here.

Want to learn more about the animals in our parks? Check out our Discovery programs, in parks and online!