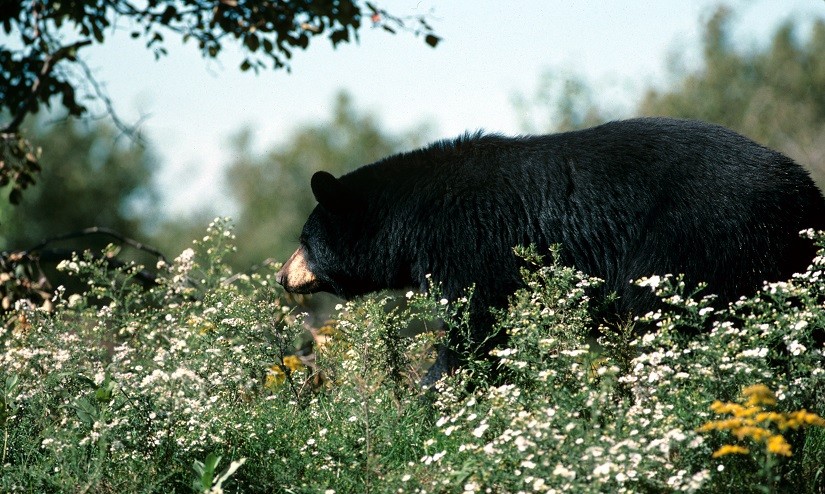 As winter weather rolls in, black bears are bedding down for hibernation.

1. Black bears are masters of adaptation

Hibernation is their way of surviving a long winter when there’s little food available. In fact, the biggest threat to their survival is starvation. Bears are shy animals. Even when they’re awake, they try to avoid humans – and they’re asleep for half the year, hidden away in their dens.

3. Black bears are about the size of humans

The females weigh, on average, between 100-150 pounds; the males between 150-180. If food supplies are good, female bears double their size over the summer, in preparation for hibernation. The only time males and females get together is in June when they mate.

Through a survival adaptation called “delayed implantation,” the embryo doesn’t implant in the uterus until the fall – and then only if the female has gained enough body fat to see her through the winter months when she is hibernating.

5. Bears give birth before emerging from hibernation

In October or November, the female looks for a spot to hibernate, usually under a tree stump or log, which she lines with grass, twigs and leaves. In January, she gives birth, typically to one or two cubs. The cubs nurse while she continues to doze periodically, and when they all emerge in April or May, the cubs have grown to weigh around five pounds each.

The cubs stay with their mother all summer and hibernate with her over the winter. The following spring, she pushes them out of the den to be on their own.

6. Bears lose half their body fat while hibernating

When bears hibernate, their body temperature drops from 38 C to 33 C, and their heart rate goes from 50 beats a minute to 10. They don’t eat, drink, urinate or defecate.

Hibernating bears lose at least half their body fat, but — amazingly — they don’t lose any muscle mass or much calcium from their bones. 7. Bears rarely turn down a snack

Like most animals, bears are constantly looking for food and will spend up to eight hours a day foraging. They’re vegetarians for the most part, and feed primarily on berries and nuts.

Black bears are poor hunters, though they will catch fish during spawning season, and if they’re able to ambush a fawn or moose calf in the spring, they will.

We’ll say it again: 7. Bears rarely turn down a snack (even if it’s in a tent or cooler)

When bears are drawn to cabins or campsites, it’s because they’re looking for food. And if they find it, they’ll be back. Bears have an excellent long-term memories, especially when it comes to where they’ve found food in the past. That’s why it’s so important for campers to keep their campsite clean and free of scents that attract wildlife. If you have a vehicle, pack all your food in containers and keep it in your trunk. This includes anything with a smell, so pack up those toiletries and clothes you have cooked in. In the backcountry, hang your food at least 4 metres above ground, on a branch 3 metres from the trunk.

Take garbage to the dump regularly, and don’t dump your dish water on your site (waste water should be dumped down a vault privy). Don’t forget to wipe your picnic table and/or barbecue.