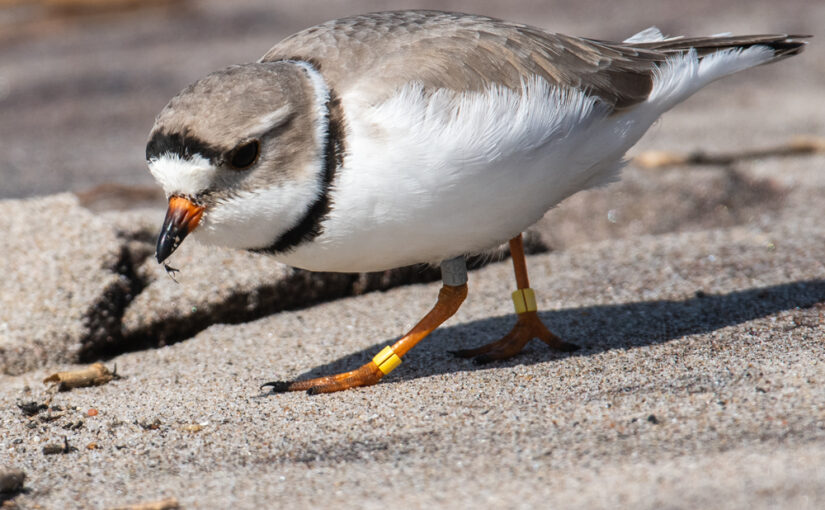 We had TWO Piping Plover nests in southeastern Ontario this year!

This year at Darlington, all three lady Piping Plovers: Miss Howard, Chewie, and 086 returned to the beach late-April.

The song “all the single ladies” definitely came to mind as they waited for a male or two (or three!) to show up.

Although only half of our Darlington Piping Plover power couple returned this season, (unfortunately Blue was not re-sighted) we had a different kind of pairing at Darlington — one of female power!

Miss Howard and Chewie got tired of waiting around and got to work making their own nest together.

This is very likely a first in the Piping Plover world!

We found one egg on May 13 and had to ask the question “are plovers like chickens?”

Based on the egg laying dates and the total number of eggs laid (six total!), we believe both Miss Howard and Chewie were laying eggs in the same nest! We even observed them switching off incubation duties just like a usual breeding pair would do!

Everyone was very excited and keen to see the outcome of this double female nest. However, after the intense thunderstorm ripped through southern Ontario on the May long weekend, we did not see Miss Howard again…

After losing her nesting partner, Chewie soon abandoned the nest and was last seen on the beach on May 23.

The season wasn’t entirely over for Chewie though, as she finally became a mom at Toronto Island this year after finding a male.

Check out Birds Canada’s The Warblers podcasts to learn more!

This is the first year since 2016 that a breeding pair of Piping Plovers nested at Presqu’ile, and that 2016 nest was the first for the park in 100 years!!

Saga is our proud papa plover.

His name gives a nod to the Ontario Parks beach where he hatched in 2021, Wasaga Beach Provincial Park.

He arrived on May 3 and actively started to attract a mate with his love songs and flight displays. I told him about the three single lady plovers at Darlington, but he had other plans.

She hatched out of Darlington’s 2021 nest, making her Miss Howard and Blue’s daughter.

And the full circle moment comes when you remember that Miss Howard was the mom of the 2016 Presqu’ile nest! Like mother, like daughter!

The young couple laid their first egg on May 17 and completed their clutch of four eggs on May 23. On June 18, all four chicks hatched and started to explore their new world.

Unfortunately, one chick was lost likely to predation, but the remaining three chicks all successfully fledged and migrated!

Presqu’ile and Darlington weren’t the only parks to welcome plovers back this year. Listed as an endangered species, the Piping Plover may be a rare sight in most of Ontario, but it has become a common bird at Wasaga Beach Provincial Park since its return in 2008.

This year, two pairs of Plovers fledged four chicks from Wasaga Beach. This brings the park’s grand total to 82 chicks successfully fledged since the start of the recovery program; the most chicks from a single site in Ontario!

We wish all our plovers a safe trip and hope we will see them again next year!

Thank you to all our amazing Piping Plover volunteers for your time and passion! You play a huge role in the overall success of the Piping Plover Recovery Program.

If you’re interested in learning more about becoming a Piping Plover volunteer check out this Birds Canada webpage for more details.

A big thanks to all our park visitors for giving these endangered Piping Plovers their space, cleaning up your litter (it attracts unwanted predators!), and keeping your pets off our pet-free beaches.