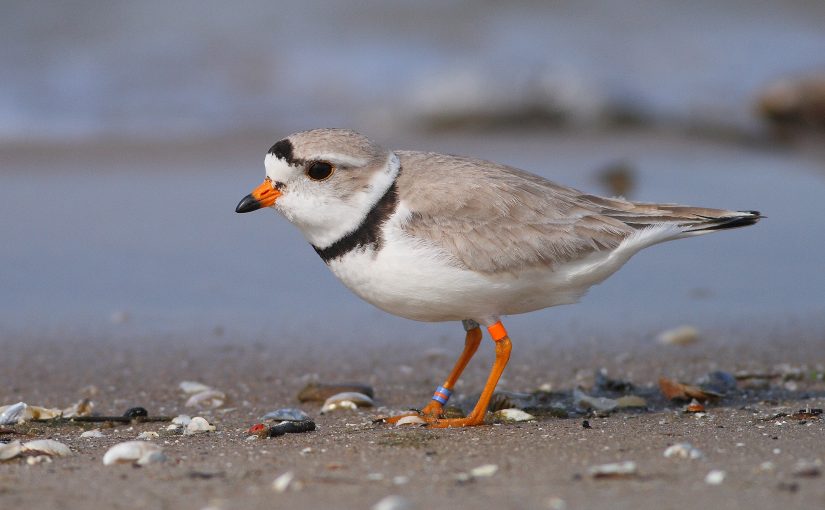 If you’ve visited some of our popular Great Lakes beaches, you may have noticed restricted areas for a tiny bird no larger than a sparrow.

What’s so important about these birds, and why do we fence off parts of our beaches to protect them?

Did you know Ontario almost lost this species for good?

Their populations began declining due to unregulated hunting and egg collecting. A decade later, federal laws prohibited the hunting and collecting of birds and their eggs.

After World War II, human shoreline development and recreation increased rapidly, along with natural pressures such as weather and predation. Piping Plovers declined to the point that, by 1977, the last known nesting pair was recorded in Ontario.

In 1986, Piping Plovers were officially considered extirpated in Ontario.

After amazing recovery efforts throughout North America, the first Piping Plover nest in Ontario was found in 2007…after a 30-year absence!

The first nest in 30 years marks an amazing wildlife event and speaks to the conservation efforts that recovery strategists put in place to protect these birds.

To ensure plovers continue to recover, it’s crucial to protect their nests. Predators like gulls, crows, raccoons, and foxes are all too willing to eat the eggs or attack the birds on the nest.

To ensure predators don’t cause a nest failing, a mini cage may be placed over the nest and eggs.

The birds aren’t bothered by the cage. Piping Plovers can easily get through the holes, but larger predators cannot.

Once the nesting pair have laid four eggs, a larger cage is placed over the nest which gives the pair more room to incubate. Finally, fencing is placed in the area to protect the important habitat.

Without protected habitat, Piping Plovers can’t be successful in raising the next generation.

This is where humans and animals, especially Piping Plovers can overlap.

We like to lie out in the sun on sandy beaches, take a nice long walks along the shoreline, or throw a Frisbee, volleyball or beach ball. We encourage our children to run around, build sandcastles, and lay out a blanket for a picnic.

But Piping Plovers need the beach too.

The adults build their nest around stones, vegetation and driftwood. They rest among large pieces of wood left by the waves on the beach. Their chicks, like our children, run all over the beach and are even hard to keep track of (however closely the adult is watching over them).

But the number one priority for the birds is feeding. Adults need to feed A LOT to gain weight for a long migration to the southeastern United States. The chicks take many risks on the beach because they have to grow and put on weight to prepare for their own migration.

A natural beach provides the chicks with cover from danger

Although we may not love having rocks and small sticks on the beach, they are an important part of the birds’ habitat.

Piping Plovers use all parts of a natural beach to complete their breeding life cycle. This is why many parks do not remove the rocks and driftwood from the beach. Protecting these beach features gives the birds the best chance at surviving and recovering the population throughout the Great Lakes.

Keeping the beach natural in our provincial parks not only supports ecological integrity, but invites diversity of birds and other wildlife species into the parks.

So if you happen across a fenced-off area of beach or a nest protector cage, take a few steps back, and enjoy your connection with these tenacious birds in their beautiful natural habitat.