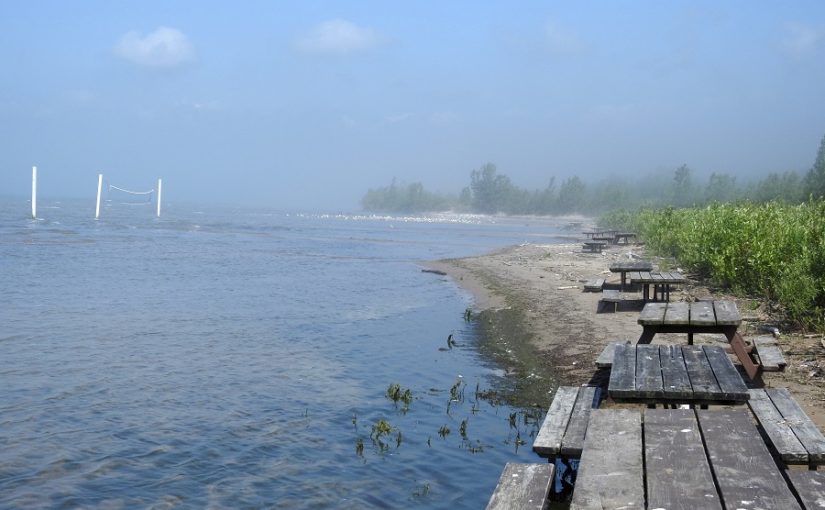 Presqu’ile is born of the lake.

The park is a tombolo of sand and gravel connecting two offshore islands.

For thousands of years, it has dealt with all kinds of water issues: drought, big waves, and even record-high water.

Nature usually has a way of balancing out extreme natural events, and this year was no exception.

So the record high water resulted in losers, but also winners.

How did the birds fare? The high water certainly impacted Piping Plovers in a negative way.  Last year, this endangered species nested at the park for the first time in 100 years.

In late April, the male plover was back, ready to set up a territory and go again.  But over the next couple of weeks, the water kept rising, and slowly the beach was covered by about 10 cm of water.

Piping Plovers nest on beaches, so no beach means no nest. Our male gave up and moved on.

By contrast, the flooded beach in July was a great attraction to long-legged southward migrating shorebirds. We’ve never had so many Lesser Yellowlegs! We also usually have a small breeding colony of Bank and Rough-winged Swallows in the day-use area. These declining species dig nests into the small lake-side bluffs.

This year, those bluffs were repeatedly pummeled by waves, and actually eroded back a couple of feet in some areas. It would be suicide to nest there, and our swallows didn’t even try.

Trees and other wildlife Pannes are low open areas between sand dunes. This year, our pannes were full of high water for an extended period of time. This seems to have killed a number of cedars growing there.

The pannes are our most globally significant habitat, and were filling in with too many trees. Therefore having these thinned out was not such a bad thing for the overall health of a unique habitat. And speaking of the pannes, all that extra water resulted in a banner year for frog and aquatic insect production.

Frogs use the temporary pools to breed in. The pools will usually dry up by July, but if they dry up too soon, the tadpoles can’t change into frogs in time and will die.

The frogs had no worries this year! The excess tadpoles were a bonus for our turtles. With lots of tadpoles, many turtles made the trek from marsh to panne to feed.

All those aquatic insects were also an abundant food source for many nesting birds.

The abundant rain in spring also meant lush plant growth. This was once again good for more insects and birds.

So was the high water a bad thing?

Depends who you ask.

As we can see, in the natural world there were both winners and losers. This illustrates the need to preserve a range of habitats across the whole province. For example, if there is no beach here this year, we need beaches inland where Piping Plovers can go.

It is important to preserve and promote a wide-ranging, robust ecosystem. This lets nature roll with the punches in extreme years such as this one. Then this year’s losers have the means to recover down the road.

This means we must protect habitats in our parks, but also become good stewards of the land elsewhere. Parks aren’t big enough to do the job on their own (want to help?).

If we can all do that, we will be in good shape for our next year of high water.