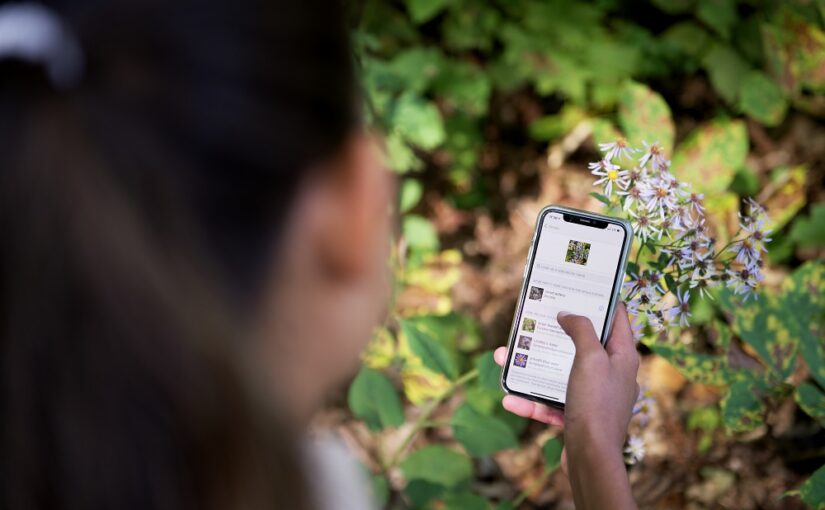 Did you know April is Community Science Month?

Every observation contributes to park research and helps maintain ecological integrity in our natural spaces.

Not to mention the cool and unusual species we’ve spotted along the way!

Check out some of our staff’s favourite iNaturalist observations: Mark made quite the discovery last August! Here’s his story:

“I’m no expert, which is one of the reasons I love to use iNaturalist.

“And sometimes, just sometimes, something really exciting is seen like this parasitoid wasp, Ambloplisus ornatus, at Murphys Point in 2021.

“With no published records outside of Florida, Idaho, and New York states, this is apparently the first record for Canada!” Brian’s most memorable iNaturalist observation occurred on a hot August day in 2018 of Common Hops (Humulus lupulus) along the Wawiag River in Quetico:

“Hops are very rare in this part of the world, and the silty banks along the Wawiag are its only known location in Quetico.

“But the real reason this was special was that I was in this area with three members of the Lac La Croix First Nation. The mouth of the Wawiag was the site of a former First Nation village before it was removed a century ago and the members, including family members of the people I was with, were forced to relocate.

“The site had originally been chosen for the community because of the rare medicinal plants found there. This was the first time a member, Jessica, had visited this area where her ancestors were born and had lived.

“Being with her and her father as we found these unique medicinal plants was a special experience for all of us, and I was honoured to be part of it.” Quinten spotted something outside of its normal distribution:

“This is an observation of Red Spruce in Algonquin, which is a tree with a primarily Appalachian and Maritime distribution, that is fairly cryptic and overlooked in this part of its range.

“It has often been called ‘Algonquin’s mystery tree,’ as we really don’t know much about its habits in the park! This is also true for Ontario as a whole, as we still have much to learn about its status in the province.

“This species exemplifies the power of community science platforms like iNaturalist, because a very interesting distribution is beginning to take shape on the observations map — and there is still much more to find!

“I use iNaturalist to document this species for my work by finding and mapping stands of it. This particular tree is part of a large stand that I just found, and as far as I can tell has not been officially documented prior.” Tanya found this unfortunate Arabesque Orbweaver during a plant survey:

“It is being eaten by a parasitoid, probably the larva of a type of ichneumonid wasp. The wasp larva will feed on its host until it is time to pupate.

“In some species, the wasp manipulates the spider host to create a special kind of web that protects the wasp as it continues to develop. Sadly, the story does not end well for the spider.” While volunteering with Harkness Fisheries Laboratory (MNDMNRF), Peter was excited to see a very interesting and remarkable fish species that came from the depths:

“Sometimes while catching Lake Trout, in order to process and release them for the study, other species or ‘bycatch’ are caught as well. Species like Brown Bullhead and Lake Whitefish are no surprise.

“A far less common catch is the Round Whitefish, a species found in only a select number of very deep, cold lakes and rivers in North America. This species is a close relative of the Lake Whitefish, but is gold in coloration with a notable round body shape.

“Seeing this individual on a snowy October night all while being tossed around a small Boston-whaler type boat was exciting, and upon submitting to iNaturalist I found there to be only 15 other observations made globally!

“This species and the fish that are native to Algonquin’s waters are a testament to just how special these cold-water environments are in an ever warming climate.”

This past summer while Kathleen was acting as the Resource Management Leader at Pinery, staff had a little Odonata (damselflies and dragonflies) challenge:

“The Discovery staff at Pinery were trying to see how many species of ‘odes’ we could find and document on iNaturalist.

“This competition meant we were all pretty motivated to try to properly document each species, which can be tricky for something like a damselfly, because you need to be able to provide photos of features such as their claspers and the tips of their wings.

“What I love about this observation though is all the help I got from other iNaturalist users — people who have written field guides about odes, colleagues in other agencies in Ontario, and people I’ve never met before!

“These are people that even a few years ago, I may never have been able to get in contact with to help me with an identification.”

You, too, can contribute to community science!

Need a little more guidance? Check out our step-by-step guide to help get you started.