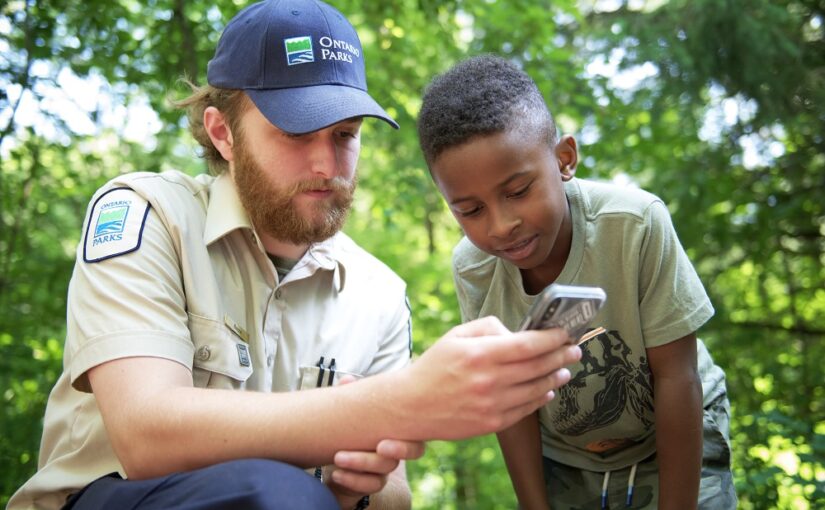 For over five years now, Ontario Parks has been encouraging park visitors to submit their observations of nature — everything from plants, animals, and fungi — to our community science project in iNaturalist.

I tip my Tilley hat to you all.

The naturalist is like anyone else: we quest and search, obsess over the unusual, and daydream about the rare.

Whether you’re a sports fan collecting memorabilia, a music fan going to tons of concerts, or a stamp collector seeking out unusual art, we all like seeing and finding the rare stuff. There is perhaps nothing more preposterous than a bird, blown thousands of kilometres off course, far away from home, only to show up in your local patch!

It creates a sense of awe and reminds us of how small the world can be.

But does this sighting of a rarity really tell us much about our landscape? It doesn’t play a functional role in the ecosystem; it’s not in its normal habitat and won’t reproduce here.

If it never appeared here again, would it matter?

Not flashy, but important

What about the common species?

We see them all of the time. We know they live and contribute to our landscape and while they aren’t rare, they do have a lot to teach us about where we are. I’ve always loved looking up what our visitors find because they find some really cool stuff!

Today I wanted to share not the rare species, but the top 5 most common species reported on iNaturalist from Ontario Parks, what they can teach us, and why it’s important to keep documenting them.

Let’s count down the 5 most common species! In my biased opinion, the Painted Turtle is among the most beautiful creatures to live in our province.

Visitors have submitted hundreds of observations of this species and it is easy to see why — they are stunning and spend lots of time basking on rocks and logs.

If you approach them quietly, you can snap a couple of great pictures.

Turtles live a long time and have low reproductive success, so losing even a few individuals can send their population in a nose-dive.

Knowing where and when turtles cross our roads can help ecologists mitigate some of these negative impacts. Occurring over most of the province, Green Frogs live in almost any wetland, including lakes and rivers.

Campers spend lots of time near these habitats, so it’s not surprising they’ve submitted so many observations!

Amphibians like Green Frogs are sensitive to pollution and disease, making them important indicators of healthy environments.

Even though they are very common right now, a decline in their population should be treated as a warning bell. Snakes are usually hard to find because they usually stay hidden!

Our community scientists are amazing at finding the Common Garter Snake, which is likely the most abundant snake in the province.

They live in a wide variety of habitats.

Observations came in from across the province. Unfortunately, many of the observations are of dead snakes on roads.

Roads are major threat to wildlife in Ontario, especially small animals like reptiles and amphibians — please give them a brake!

Many people aren’t too fond of snakes, but Garter Snakes are interesting, harmless, and charming. Thanks for the recording help, snake fans! The universal love of monarchs and their recognizability (as an adult and caterpillar) makes this species doubly easy to find.

Monarch are famous for their journey from Ontario to Mexico, flying up to 4,830 kilometres in the fall to reach their destination.

While they may appear common here, their numbers have declined dramatically, and they have been designated in Ontario as a special concern species, and internationally as an endangered species.

Your observations can help us determine abundance and habitat and understand the timing of the monarch’s migrations. Finally, we have a toad-ally deserved top spot for one beloved amphibian. Topping our list is the icon, the legend: the American Toad.

I know why this species is the most commonly reported one — it occurs everywhere!

From the most southerly point in Ontario hopping under Carolinian forests to the far north, rubbing elbows with Polar Bears.

In addition to being findable and easy to watch; toads aren’t particularly fast, meaning just about anyone can snap a pic of this creature. They are also rather charming (come on, look at that face!).

Common species play important roles in our landscape, and we should be happy that they are common!

Healthy environments can support large numbers of native species. We should aim to keep them common. Thank you to everyone for submitting your observations and helping us document biodiversity in Ontario Parks!

If you want to join in, check out iNaturalist or download the app for your mobile device.

What will you find?