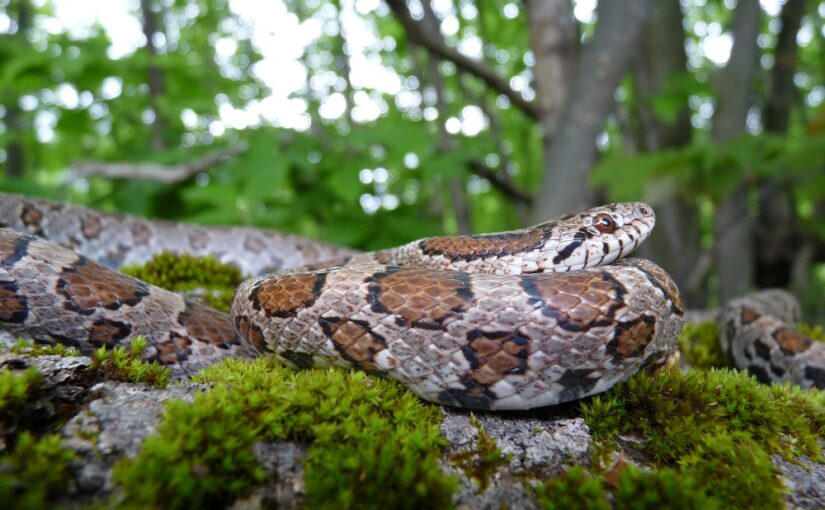 We often hear our visitors say how much they fear or hate snakes.

Ophidiophobia, the name for an intense fear of snakes, is certainly a legitimate condition, and we do not judge anyone who struggles with it.

Many of our own staff are working through this fear. No one chooses to have a phobia. The outdoors should be a place for relaxation and rejuvenation, not the constant fear of a chance encounter with a native species.

For those of us whose fears don’t reach the level of diagnosable phobias, there are several biological and cultural forces at work.

Some evidence points to biological mechanisms, remnants from when our ancestors lived in areas with many venomous snakes.

Many fears are also learned.

Previous negative experiences, learning fears from parents or other family members, film, and other media all play a role in creating snakes’ bad reputation.

But these “danger noodles” should be very low on your list of worries in Ontario.

There is only one species of venomous snake in the province.

Eastern Massasauga Rattlesnakes have a limited distribution, and they are very shy. The purpose of their venom is to capture mice, voles, and shrews, and they will only bite in self-defense.

To keep yourself safe:

If your home or favourite park is not within Eastern Massasauga Rattlesnake range, you have even fewer worries.

While some snakes may put on a show or may bite with their tiny teeth in self-defense if someone grabs them, you have less to fear from a snake than the average chipmunk.

The circle of life

While all snakes are carnivores, their prey is on the small side.

Eastern Gartersnakes are even less picky and will eat all of the above.

Snakes are important regulators on their prey populations, and they themselves are prey for other animals like Wild Turkeys, Great Blue Herons, Raccoons and Coyotes.

These ecosystem roles make snakes important residents in parks, and we put a lot of time and effort into protecting them.

This is sadly necessary because the biggest snake killer out there is humans.

We destroy their habitat, and we remove their protective cover by clearing and burning dead branches and underbrush.

Be a wildlife warrior: brake for snakes

Every year, vehicles kill many snakes on park roads. Parks are more popular than ever, which means more vehicles and overall risk to snakes. Most of these snake deaths are accidental, but research has shown that some drivers will even do it intentionally, aiming for snakes when their vehicles would otherwise miss them.

“Brake for snake” signs, ecopassages, and speed bumps are all important tools to save snake lives, but snakes also need advocates.

Here are some things you can do to help:

Help snakes cross the road. Don’t touch them with your bare hands, as this could spread disease; usually a gentle nudge with a stick will do the trick.

As with turtles, always help them move across in the same direction they were originally heading. If you can, avoid driving. Commit to “park once” by driving to your campsite and walking or cycling for the duration of your trip.

If you must drive, slow your speed in natural areas, particularly when near wetlands.

Never force a snake interaction with someone with a phobia or strong aversion to snakes, but if you know someone who is willing but hesitant, seek out or discuss snakes with them.

Learn how to identify the snakes around you, and report your sightings on iNaturalist.

Leave logs and sticks where they lie. Animals like snakes depend on these objects for protection. Without them, they are easy prey for birds and mammals.

Never release a pet into the wild. Not only is this cruel to your pet, it can also introduce new diseases into wild snake populations.

Never relocate a snake from your own property to a park. This can spread disease, and the snakes in your yard are doing important work controlling insects and rodents! Help them out by providing cover objects such as logs and rocks.

Nine of Ontario’s snake species, including the Eastern Massasauga Rattlesnake, are Species at Risk.

Let’s celebrate the beautiful spotted and striped snake diversity in this province, and make sure that parks are safe places for snakes to roam.