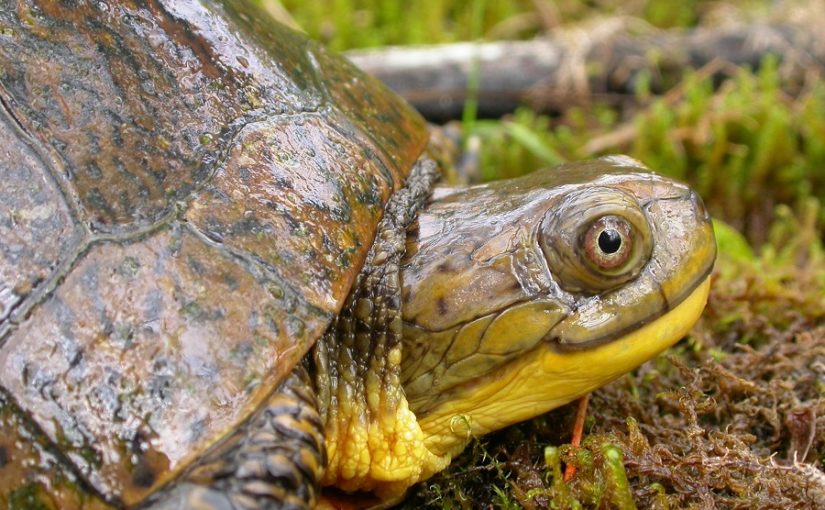 Many Ontario Parks have their “signature” wildlife: commonly-encountered and charismatic animals that most park visitors hope to catch a glimpse of during their stay.

But did you know Grundy Lake Provincial Park is the place to see a Blanding’s Turtle?

Grundy is lucky enough to host a healthy population of this species. During the month of June, these striking turtles (which stand out because of their bright yellow throats and high-domed shells) can be commonly seen crossing park roads and meandering along beaches in search of nesting sites.

When a female has found a suitable location, she’ll slowly begin digging a vase-shaped hole in the ground, scooping up the earth with her back feet. Once it’s deep enough, she lays her eggs, delicately repositioning them with her feet as they tumble into the nest.

After all her eggs have been laid (between 3 and 19), she covers them with soil. The entire process can last a few hours. Throughout the experience, the mother turtle never sees her eggs, and she will not be present when they eventually hatch late in the summer.

Nesting season is often our only opportunity to see Blanding’s Turtles. They generally stow themselves away within the park’s many wetlands throughout the rest of the year. If you can brave the mosquitoes, Grundy Lake is the place to be to see these incredible animals! Amazingly, these turtles don’t begin laying eggs until they’re around 20 years old, and they’ll continue to lay their eggs well into old age (the oldest Blanding’s Turtle known to science is over 80!).

Unfortunately for Blanding’s Turtles (and all Ontario turtles), nesting often leads them to the sandy shoulders of roads.

These warm, sunny places have lots of exposed sand and gravel to incubate eggs, but leave the female turtles exposed to the dangers of traffic.

All of Ontario’s turtles are considered species at risk, largely because of road mortality. Reptiles don’t compensate for losses by having more babies, so when turtles are killed on the road year after year, their numbers start to drastically decline.

Firstly, we needed to find out how we can stop turtles from getting run over on our roads.

To do that, we needed to know when, where, and how turtles use them. We began to pay better attention to the turtles we saw, and wrote down the details:

The more information we collected, the more we wanted. The more we were out there in the park, the more campers wanted to observe, participate, and ask questions. It seems everyone had a story and a connection to turtles. Once campers were aware of the turtle monitoring program, they enthusiastically reported their sightings to park staff!

Now we have plenty of records of Blanding’s Turtles, Midland Painted Turtles, and Snapping Turtles.

We even had a camper report an Eastern Musk Turtle, or “Stinkpot” – the first park record! This turtle earned its name through the odour it emits when threatened. They spend most of their time in the water, so are not often seen.

They are considered a species of “special concern,” as changes to its habitat could have a negative impact its population.

If it weren’t for park visitors, often our “eyes and ears” when it comes to park wildlife monitoring projects, we may not have found this special species. Because of these records, we now know where and when turtles move about (turns out it’s different for males and females), and where they like to nest.

Signage shows Grundy Lake campers where to be especially careful for turtles on the road.

We ensure nests are recorded and protected from harm in the campground and areas with roads, and can check for hatchlings in the fall and help send them on their way.

We use the data we’ve collected for making park management decisions. With participating visitors reporting their sightings right away, we will continue to collect valuable information.

How can I help?

If you’re interested in helping Ontario’s turtles, there are a few simple things you can do:

If your sighting isn’t from within a provincial park, you can report it using apps like iNaturalist and the Ontario Reptile and Amphibian Atlas. They’re free, and let you connect, share, and discover the amazing diversity of your area with a few clicks.

Most importantly, keep learning and asking questions about how you can help in your home or camping community to protect these amazing species that call Ontario home!