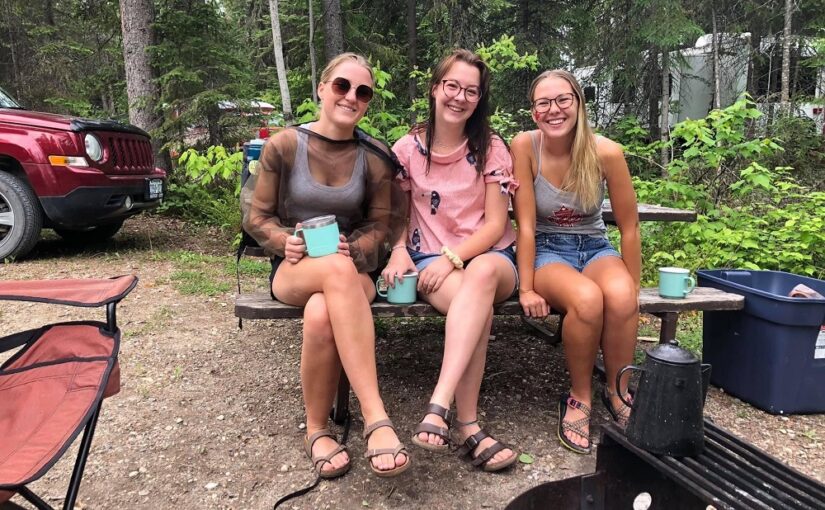 Park experiences, just as sisters, vary greatly. Each has their own personality and experiences.

With 19 seasons of parks experience between my sisters and I, you would think I (being the oldest sister) would have the most experience, however that’s actually not the case.

My parks journey started almost 10 years ago, five of which have been spent working for parks. No matter what life obstacles came in my way, I always found myself longing to be back in parks. At 15, I packed my bags and moved 14 hours away from home to Fushimi Lake Provincial Park to become a gate attendant.

At the time, Fushimi had no reservation system and campsite permits were written by hand! Oh how times have changed…

It was this summer that my love for parks developed and I knew that I had to go back. Instead of going back to Fushimi, I switched gears and headed west to Nagagamisis Provincial Park. Nagagamisis is a beautiful park located in the middle of nowhere.

With no cell service and no internet, it’s the ultimate vacation spot to be away from your phone.

As a gate attendant, I met people from all over Canada and I loved hearing their stories of their travels.

Not only did I meet people who were camping, but I also got to live with students from all over Ontario.

We all have different interests and backgrounds, but after living together for two months every year, we’re inseparable.

In 2019, I was offered a park warden position at Nagagamisis. I was terrified but also very excited!

This job allowed me to be outside all day while still interacting with campers.

As much as I love northern Ontario, I am a southern Ontario girl at heart. I needed a change of scenery, leading me to Fairbank Provincial Park this year.

This small park, located only 45 minutes from Sudbury, has brought me so much happiness since I’ve been working here.

Ontario Parks has taught me so much about myself, and without it I would not be the person I am today.

Though I’m only 23, I’ve come to realize that life is about the people that you meet and the memories that you make.

The memories that I have made in parks will last a lifetime.

The summer of ninth grade I travelled over 1,350 km for a summer job… weird right?! I left my hometown of Wheatley, Ontario for two months to work at Fushimi Lake in Hearst, Ontario.

My first summer I worked as a gate attendant. While I enjoyed interacting with campers, I wanted to work outside… not in an office.

I was homesick most of the summer and had a hard time adjusting to living away from home in a staff house with ten other students.

It was a long two months, but the best experience a young teenager could have!

I worked in maintenance the following two summers, too! From cleaning toilets, cutting down trees, unloading skids of firewood, building a playground, cutting grass and everything in between, working maintenance in Ontario Parks was probably my favourite job thus far.

This opinion may be correlated to the amazing people I worked with.

After my first year of university, I needed money (desperately) and was hired back as maintenance at Fushimi Lake, but for a longer contract.

From maintenance to park warden

About a month before I left, Fushimi’s superintendent called and offered me the first full time park warden position that Fushimi had in several years.

I was excited, nervous, and scared, but I accepted!

I was terrified, but it was one of the best experiences I’ve had in my life! For three seasons I worked as a park warden at Fushimi Lake. Over the years I went from being the youngest in the staff house to the oldest. I went from having a supervisor every day to working alongside these same supervisors. I went from straight day shifts to straight afternoon shifts.

I connected with campers, bonded with my fellow staff members, and made lifelong friends. All this changed this year.

After seven seasons at Fushimi Lake, I decided it was time to close that chapter and stay home for a summer.

This decision was a difficult and a teary-eyed one. I told myself I needed a break from parks, just for a change.

In March, however, I was told that Wheatley was hiring a park warden. Yes, you guessed right, another season in parks for me!

From living in the tranquility of northern Ontario for seven seasons to now being at home on the great Lake Erie, I can truly say that Ontario Parks has changed my life.

Thanks to everyone who has made my Ontario Parks experience as wonderful as it’s been.

If I had one piece of advice over the past eight years, it would be to apply to work at a provincial park.

You never know where parks will take you, but I can promise if you have an experience anything like mine, you won’t regret it. As the baby of my family, I often don’t make my own decisions. Most of the time they are made for me.

With two sisters working 14 hours away from home at Fushimi Lake and Nagagamisis, I spent a lot of time trekking across Ontario with my parents to visit them during the summers.

As fate would have it, I finally became old enough to get my first real job. Although my sisters made the clear path for me to travel to Fushimi Lake, I couldn’t have been more excited to go.

Like my sisters, my first job at Fushimi Lake was as a gate attendant. I met campers from all over Canada, and even a couple who rented a camper van from Germany!

While I did love being immersed in nature, I knew that I wanted to be closer to home, which led to the rare occasion where I made my own decision.

Finding my own way

I applied to work at Wheatley, a park that gave me what I wished for: being closer to home (a seven minute drive from home).

I worked at Wheatley for two years in the Discovery program, which involved me running different educational programs, encouraging kids and their families to explore, observe, and discover!

After my third year with Ontario Parks, I started studying Environment, Resources and Sustainability at the University of Waterloo.

I realized how lucky I was to already have a job in a field that is related to my degree. I knew that I wanted to move up in parks, so when the opportunity for me to come back to Fushimi Lake in a Green Position, I knew I couldn’t pass it up!

Now, here I am. My third year in the Green Position and my sixth year with Ontario Parks.

I have made some incredible memories with some incredible people. I’m really lucky that I have two great sisters that have broken so many barriers and have become female wardens in a male-dominated industry.

I hope to get the opportunity to follow in their footsteps and become the third Dresser sister to become a warden!

I am so grateful for the opportunities I have been presented with in Ontario Parks and for everyone that has pushed me to take them.

The adventure of a lifetime

Just like the Dresser sisters, many find a life-changing experience waiting for them in parks.

Working for Ontario Parks is an opportunity to work outdoors and do your part to protect Ontario’s natural environment.

If you’re a nature-loving adventure seeker, it could be the job for you.