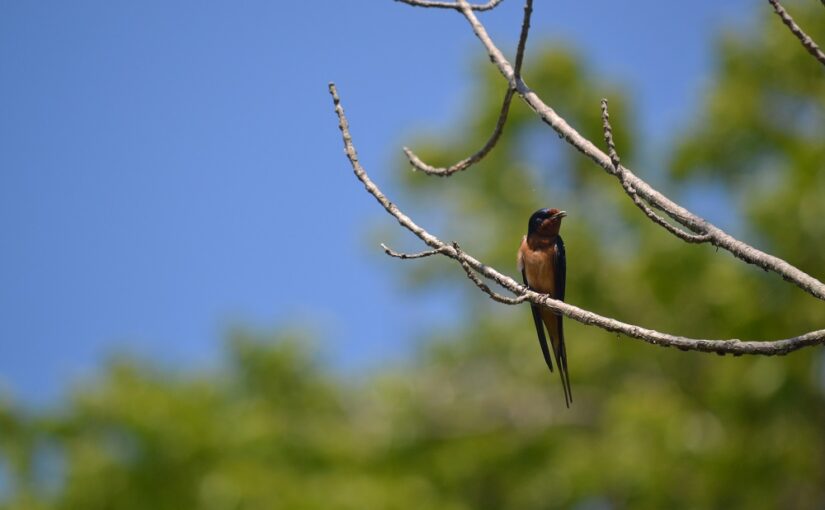 With summer in full swing, staff have been busy in parks, both in front of and behind the scenes!

Through our donation program, parks across Ontario’s southwest have received funding for ongoing projects designed to protect some of the most unique wildlife in the province.

Here are five of them:

A home for Barn Swallows

Barn swallows are some of the most unique creatures found in Ontario Parks.

These birds have been around humans for so long now that they almost exclusively make their homes in man-made structures like barns and bridges. Sadly, the number of available nesting spaces has been declining due to many old rural structures that Barn Swallows used have fallen or been torn down and are no longer suitable.

As nesting options for Barn Swallows have declined, the species is now considered threatened in Ontario, meaning they will become endangered if actions are not taken.

Ontario Parks has built three new structures in Pinery Provincial Park that will serve as ideal nesting spots for Barn Swallows to support the population in the region for years to come. While we love when visitors see wildlife, it can be dangerous if animals are crossing the road when driving at high speeds.

Another donor-funded project that will have a big impact is the new driver feedback signage at Pinery Provincial Park.

These signs alert drivers if they are speeding and will be placed in areas where animals are more likely to cross.

There are also signs that alert drivers how high the risk of seeing animals crossing the road is at the time, and more signs signaling common crossing areas.

Fire is a key conservation tool in parks, but it is important to differentiate between dangerous wildfires and prescribed burns.

For human safety, natural forest fires are carefully monitored, however wildland fires are a natural part of most ecosystems.

Thanks to this donation, Pinery Provincial Park will have the proper equipment to effectively manage their prescribed burn program.

A reminder that while these fires are a critical part of biodiversity management they are implemented by highly trained staff under very strict and specific parameters. It is important that park visitors only have fires in designated firepits on their campsites. Otherwise, fires can spread, causing serious damage, and put people’s safety at risk. The Piping Plover is an iconic bird at Wasaga Beach Provincial Park.

They largely rely on nesting on beaches, making Wasaga Beach a prime spot for these small shorebirds.

The species became endangered in the 1980s and was unable to nest for decades until finally returning to the province in 2007.

Wasaga Beach has an ongoing beach resiliency program that creates habitats for the plovers to nest and be unaffected by human interference.

These interpretative panels will inform visitors about wetland restoration programs in the parks, and the trail closure signage will be critical to conserve trail areas that have been damaged or are unsafe.

Ontario Parks thanks the Weston Family Foundation for their continued support.

Donations like this allow our parks to run these kinds of conservation programs and ensure that the land is preserved for future generations to enjoy.