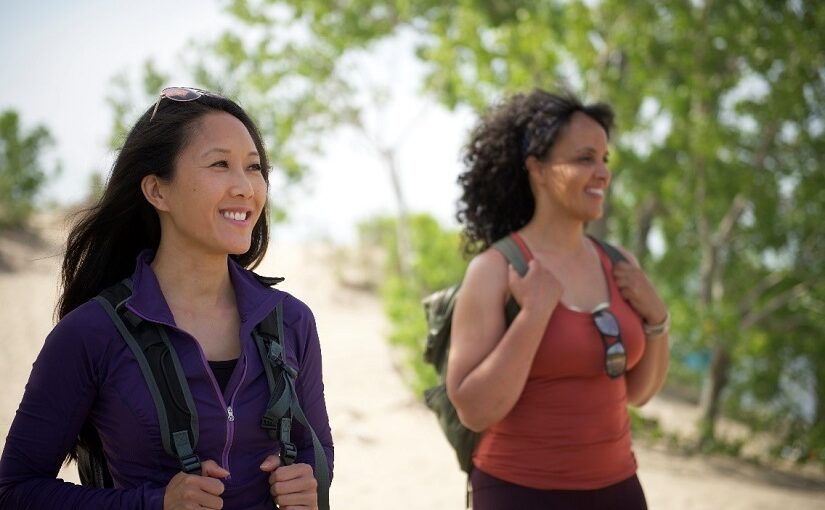 This August, Ontario Parks and Healthy Parks Healthy People challenge you to make nature a priority and spend 30 minutes outside every day for 30 days.

Studies show that time spent in nature makes us happier, healthier, and less stressed. As little as 30 minutes a day can lower your blood pressure, increase self-esteem, reduce anxiety, and boost your mood!

This year, we have teamed up with Merrell Canada to giveaway a pair of hiking shoes to one lucky participant!

To win, all you have to do is share a photo of yourself being active in a provincial park in August.

To enter, make sure you use #30x30Challenge and tag @OntarioParks and @MerrellCanada. Contest is open on Twitter and Instagram.

Full rules of the giveaway below:

1. Eligibility: To enter the Ontario Parks 30×30 Challenge Promotion (the “Promotion”) you must (a) be a legal resident of Ontario, (b) be 18 years of age or older at time of entry, and (c) have a valid Twitter and/or Instagram account. Employees of Ontario Parks, as well as their immediate family (defined as their spouse, parents and step-parents, siblings and step-siblings, and children and step-children) and household members (defined as people who share the same residence at least three (3) months out of the year), are not eligible to participate in the Promotion. Participation in the Promotion constitutes the entrant’s full and unconditional agreement to these Official Rules and the decisions of the Sponsor, which, subject to applicable laws, are final and binding in all matters related to the Promotion. To win a Prize in the Promotion, these Official Rules and all requirements set forth herein must be fulfilled. The Promotion Prize Winners are selected by way of a random draw.

3. Timing: The Promotion begins on Sunday, August 1, 2021, at 12:00 a.m. Eastern Time (“ET”) and ends on Tuesday, August 31, 2021, at 11:59 p.m. ET (the “Promotion Period”). The Sponsor’s computer is the official timekeeping device for the Promotion. The time that an entry is deemed to be received by the Sponsor will be the time at which such entry is received by the Sponsor’s mail server or web server (as applicable), as determined in accordance with the applicable server’s clock.

4. How to enter: Post one photo of outdoor activity in Ontario Parks on Twitter or Instagram during the Promotion Period, use the #30x30Challenge hashtag, and tag @MerrellCanada and @OntarioParks. Limit one (1) entry per household during the Promotion Period regardless of method of entry. Pets are not eligible for Prizes in the Promotion. Entrants are only eligible to win one Prize. The use of any automated system to participate is prohibited and will result in disqualification. The Sponsor is not responsible for late, incomplete, invalid, unintelligible, or misdirected registrations, each of which will be disqualified.

5. Entrant selection: On Friday, September 3, 2021, at approximately 10:00 am ET, the Sponsor will conduct a random draw to select one (1) entry for the Prize (as defined below in Section 6) from all valid entries received from entrants during the Promotion Period. The selected entrant will be contacted by the Sponsor by Friday, September 10, 2021 by social media using the information that such entrant provided with their entry and may be declared a Winner, subject to verification of eligibility and compliance with the terms of these Official Rules.

6. Prizes: Prizes will be awarded as described in this section:

The approximate retail value of the Prizes is $160.00. There is no cash equivalent for the Prizes. The Prize is non-transferable, and no substitution will be made. Upon being notified of their success, the Sponsor will work with the Winners to determine the most appropriate delivery method of the Prize. Shipping or delivery costs of any of the Prizes will be the responsibility of the Winner(s).

8. Publicity: Except where prohibited by law, participation in the Promotion constitutes the Winner’s consent to the use of their name, photographs, images, resemblances, and/or voice in a variety of media, including, without limitation, video and voice display in social media channels and any other outlets, for the publicity purposes of the Sponsor without any compensation or payment to the Winners.

9. General conditions: The Sponsor reserves the right to cancel, suspend and/or modify the Promotion, or any part of it, if any fraud, technical failures, or any other factor beyond the Sponsor’s reasonable control impairs the integrity or proper functioning of the Promotion, as determined by the Sponsor in their sole and absolute discretion. The Sponsor reserves the right, in their sole and absolute discretion, to disqualify any individual that they find to be tampering with the entry process or the operation of the Promotion or to be acting in violation of these Official Rules or the result of any other promotion or an unsportsmanlike or disruptive manner. Any attempt by any person to deliberately undermine the legitimate operation of the Promotion may be a violation of criminal and civil law, and, should such an attempt be made, the Sponsor reserves the right to seek damages from any such person to the fullest extent permitted by law. The Sponsor’s failure to enforce any term of these Official Rules shall not constitute a waiver of that provision.

10. Limitations of liability: The Released Parties are not responsible for: (1) any incorrect or inaccurate information, whether caused by entrants, printing errors, or by any of the equipment or programming associated with or utilized in the Promotion; (2) technical failures of any kind, including, but not limited to malfunctions, interruptions, or disconnections in phone lines or network hardware or software; (3) unauthorized human intervention in any part of the entry process or the Promotion; (4) technical or human error which may occur in the administration of the Promotion or the processing of entries; or (5) any injury or damage to persons or property which may be caused, directly or indirectly, in whole or in part, from any entrant’s participation in the Promotion or the receipt or use or misuse of the Prize. If for any reason an entrant’s entry is confirmed to have been erroneously deleted, lost, or otherwise destroyed or corrupted, such entrant’s sole remedy is another entry in the Promotion, if possible, and otherwise, such entrant shall have no remedy. If it is not possible to award another entry due to the discontinuance of the Promotion, or any part of it, for any reason, the Sponsor may, in its discretion, elect to hold a random drawing from among all eligible entries received up to the date of the discontinuance of the Promotion for the Prize, no more than the stated number of Prizes will be awarded. If production, technical, seeding, programming, or any other reasons cause more than the stated number of Prizes, as outlined in Section 6 of these Official Rules, to be available and/or claimed, the Sponsor reserves the right to award only the stated number of Prizes by a random drawing among all legitimate, unawarded, eligible Prize claims.

11. Disputes: The Promotion is governed by the laws of Ontario and the laws of Canada applicable therein, is subject to all applicable federal, provincial and municipal laws and regulations, and is void where prohibited by law. Participation in the Promotion constitutes the entrant’s full and unconditional agreement to these Official Rules and decisions of the Sponsor, which are final and binding in all matters related to the Promotion and these Official Rules. By entering the Promotion, the entrant agrees that the courts of the Province of Ontario, Canada shall have jurisdiction to entertain any action or other legal proceedings based on any provision of the Promotion’s Rules and Regulations or the running of the Promotion.

12. Termination: The Sponsor reserves the right, in their sole and absolute discretion, to terminate, modify or suspend the Promotion, or modify the Official Rules, and any other rules and regulations made by the Sponsor, at any time for any reason whatsoever.

13. Entrant’s personal information: The Sponsor reserves the right to contact entrants and all other individuals whose contact information is submitted as part of this Promotion in relation to the Promotion. No further marketing communications will be received by entrants unless entrants provide explicit permission to receive further communications. Information collected from entrants is subject to the Sponsor’s Privacy Policy, which is available below.

Ontario Parks thanks corporate partners like Merrell for their support.