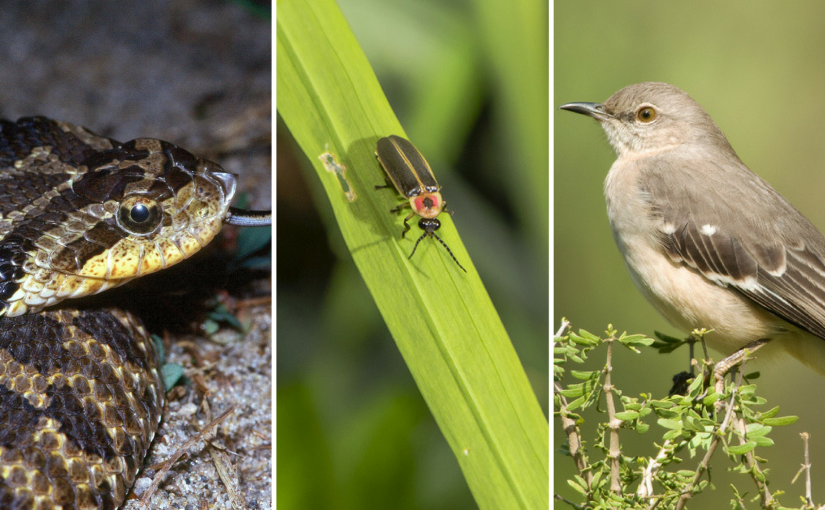 Nature sure has a lot of colourful characters and powerful performances.

This awards season, I would like to take the time to acknowledge the stars of our natural environments in their tireless efforts to put on their best act for the sake of survival. This familiar species is a highly protective parent. The Killdeer parent will expertly feign a wing injury in hopes of luring their natural enemies away from their nest. Once they are satisfied that the predator is far enough from their precious babies, they resume their normal flight. A portion of the Caddis fly family spins elaborate costumes out of silk and debris to create the ultimate camouflage. The aquatic larvae of the fly will spin their silk and incorporate shells, pebbles, even gold and pearls to create a functional, yet stylish casing. There have been many beautiful examples of cases in cultivated Caddisfly larvae. From February to August, the Northern Mockingbird is busy practicing its repertoire, which can reach a size of over 200 sounds and songs. The mockingbird is so good at its imitation, even acoustical analysis cannot differentiate the reproduction from the original. The bird will mimic dog barks, cat meows, alarms, rattles, squeaky gates, and — of course — other songbirds.

Both males and females sing, however, only the best male singers will get to mate. Mockingbirds have a truly convincing act, fooling both beginner and expert birders every spring. The females of the photuris species (an insect in the firefly family) is truly a femme fatale. This dastardly dame will mimic the mating signals from another species of firefly, photinus. An eager, unsuspecting male will fly toward the photorus female hoping to find a photinus female. Instead the photuris will snatch the male and satisfy her appetite…for food. In true Shakespearean style, the Hog-nosed Snake prefers to avoid conflict by faking its own death. Before resorting to this tactic, the snake will flatten its neck and rattle its tail. The snake is trying to convince its foes that it’s venomous, mimicking the appearance of a cobra.

If the tough-guy act isn’t cutting it, the hog-nosed snake goes all out. The snake will turn itself over, stick out its tongue, and even produce musk to make the act oh-so-real smelling. If you try and turn the snake back onto its stomach, they will twist themselves again. These animals have true dedication to their role.

Learn about other stars of the natural world here.