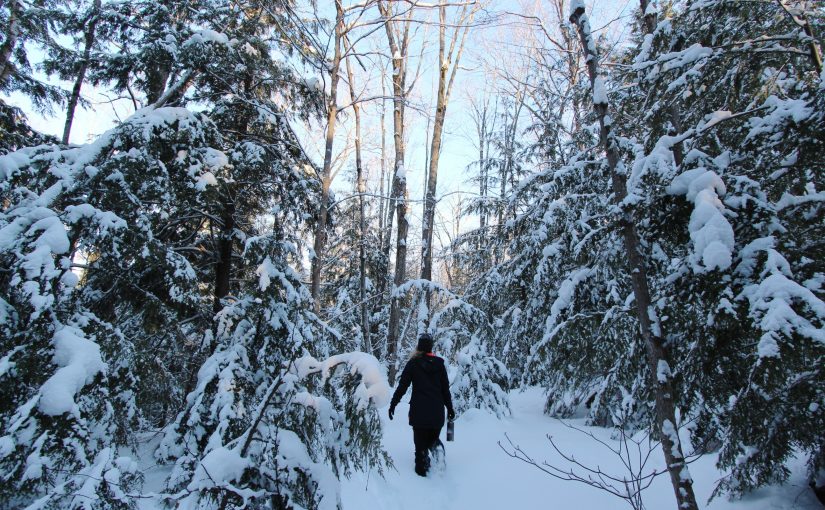 Today’s post comes from Brianne Brothers, a zone ecologist from our southwestern parks.

Ah, snow. A substance that truly embodies what it means to be Canadian.

While many of us struggle with the idea of enjoying something that inflicts hard physical labour and white-knuckled driving, it truly is clean, fresh, and beautiful.

In that light, please grab a cup of coffee and a cozy window seat, and let’s explore the science of snow.

The creation of snow Simply put, when the atmospheric temperature is at or below 0 degrees Celsius, moisture grabs on to dust or pollen particles and eventually grows into a snowflake!

Temperature is the key here, because without cold air, this process would produce raindrops rather than snowflakes. Like rain, when these snowflakes become too heavy, they fall to the ground and provide us with a winter wonderland (and shoveling, sorry).

Back to our two important ingredients: temperature and moisture.

Warm temperatures indicate higher moisture levels, creating wet snow. Under these conditions the edges of each snowflake melt causing them to stick together, creating big, heavy (heavy is relative when we are referring to a snowflake!) flakes. Wet snow is perfect for rolling snowmen and catching flakes on our tongues. It is also the type of snow that makes one cry a little when a snowplow rumbles across the end of the driveway, after you shovel (every time!).

Cold and low moisture conditions create dry snow. These snowflakes do not stick together and therefore are much smaller, lighter, and fluffier. These flakes are often referred to as “powder”, and are a favourite at ski resorts. It’s a common misconception that cold climates also receive large quantities snow. In fact, many of these locations have little-to-no moisture (thinking back to our two ingredients!), and therefore have desert-like conditions, such as Antartica’s Dry Valleys, which have almost no snow or ice cover. (Note: do not wear sandals to this desert.)

How do plants survive in winter?

Plants are master adapters. During the winter, there is a lack of water, and because of this, deciduous trees, such a maple trees, shed their leaves and go dormant (this is called “senescence”) to save precious energy. Coniferous trees, such as a white pine, keep their foliage, but rely on a waxy-coating to prevent water loss. The shape of coniferous trees is also a neat adaptation; the conical silhouette of these species allows snow to easily slide off, preventing damage from the snow load.

How does snow science relate to wildlife? Snowflakes undergo several changes throughout their travel time to the earth. These multiple personalities are the result of changes in air moisture, the temperature, and other environmental factors.

Once snow hits the ground, it continues to change over time and this process is referred to as age-hardening. As the snow ages and undergoes periods of warming and cooling, it changes composition and creates different layers. Layers closest to the ground are much warmer than the top layers, and this warming creates weak, sugar-like snow that is much less dense than other areas of the snowpack. This weak layer is known as the depth hoar, and it allows animals to freely move and create tunnel networks beneath the snowpack. This under-the-snow world is called the subnivean zone.

Next time you are standing in deep snow, remember that species like mice, voles, and shrews are right beneath you having a party in this subnivean  environment!

Pro tip: use these words as often as possible to enhance snow geek credit Winter snow can be a lot of fun. Why not bundle up and plan your next adventure!