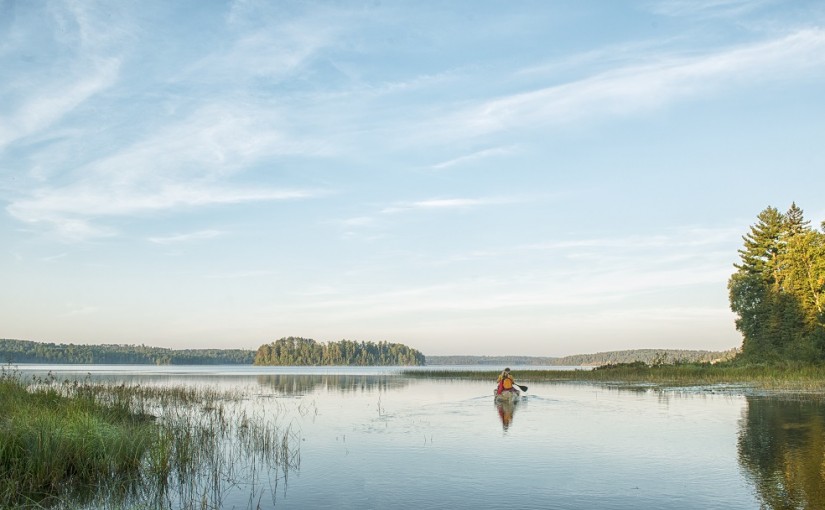 What can you do at Quetico Provincial Park that you can’t do anywhere else? We ask Quetico park superintendent Trevor Gibb.

“That’s easy,” he answers. “You can cross an international border in your canoe to camp in a backcountry wilderness park.”

Canoe? Across the border?

People come from far and wide to canoe here. The majority are Americans, paddling up from the Boundary Waters. These cross-border visitors collect their park permits at one of three remote entry stations along Quetico’s southern perimeter.

“In the case of our Portage Prairie ranger station,” says Trevor, “you start your trip into Quetico by making a short portage to pick up your permit. It’s a roadless area, so you cross the border in your canoe and then enter Quetico with your canoe on your shoulders and your pack on.”

The other two remote entry stations are on the water.

“At our Cache Bay entry station, you paddle up to an island on the Canada-U.S. border. We have a ranger station there where you can pick up your camping permit.

“And on the southwest side of the park, you can either paddle in or catch a motorboat shuttle to our Lac La Croix ranger station, which is located on Lac La Croix First Nation. There are all kinds of interesting ways to get into our park.” Once you’ve checked in, it’s just you, your canoe and a breadcrumb trail of lakes and rivers.

You certainly won’t go hungry. The fishing is first-class throughout the park.

“Many of the lakes in Quetico have smallmouth bass, walleye, lake trout and northern pike, all in the same lake. You can catch all four in the same day.” But you’ll have to catch them with barbless hooks and artificial bait. No organic bait is allowed.

You share the park with plenty of wildlife. If you’re lucky, you might paddle by a moose grazing on pond lilies, spot a bald eagle soaring overhead, or hear the far-off howl of a wolf. There’s a Quetico moment around every bend. At night, you’ll drift off to the peaceful lapping of water, the sigh of pines and the prospect of another Quetico sunrise.

Ready to plan a trip? Check out the Northwest Wilderness Quest!

We’re challenging our campers to plan three bucket-list trips in the next four years. Camp at three of our province’s most pristine wilderness parks for your chance to win!