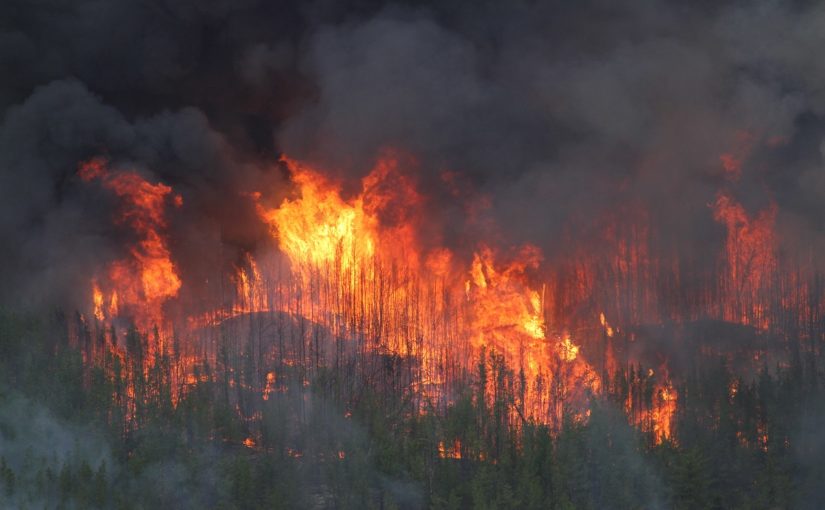 Some of the technology to fight forest fires was first developed almost a century ago. The province has used this technology for many decades to prevent and extinguish wildfires in Ontario Parks and other protected areas.

Over time, we discovered something interesting. Aggressively extinguishing fires didn’t stop forest fires. It only postponed them.

We needed a strategy that protects people and property, but keeps forests strong and healthy too.

Woodland Caribou – Ontario’s sixth largest provincial park – is a prime example of how wildland fires can bolster ecological integrity. Wedged between Kenora, Red Lake, and the Manitoba border, this wilderness paradise protects almost half a million hectares of boreal forest.

At Woodland Caribou, wildfires are never more than a thunderstorm away. Almost 15,000 hectares of the park goes up in flames a year. That’s an area the size of Presqu’ile, Sandbanks, Pinery, Rondeau, Wasaga Beach, Bronte Creek, Arrowhead, Darlington, MacGregor Point, Earl Rowe, and Wheatley Provincial Parks all put together!

“We get a lot of hot, dry prairie air, and a lot of lightning strikes,” says Park Biologist Christine Hague. “So we just burn.” In fact, this area has the one of the highest densities of lightning-caused fires in the province.

Lightning sparks 99% of the fires in the park. These fires typically burn an entire stand, a subsection of the forest where the trees are all roughly the same stage and age. A forest untouched by humans would be a patchwork of stands. Woodland Caribou is dominated by stands of Jack Pine. These fast-growing but short-lived trees have a natural lifespan of 50 to 100 years. Jack Pines need fire to complete their life cycle. Their tightly sealed cones only release their seeds when exposed to high heat.

Preventing and extinguishing fires artificially extends the life of certain parts of the forest — like putting it on life support. And it’s a pretty poor quality of life. The trees are vulnerable to disease and damage. Without fire to open the cones, the trees in an aging stand get weak and fall. Animal life moves out. Invasive species gain a foothold. Other trees, like birch, replace the Jack Pines.

Ontario Parks works with Aviation, Forest Fire and Emergency Services (AFFES) to manage wildland fire so that it can play its natural role in the life cycles of our protected spaces.

When wildland fire threatens people and property, fire crews put it out or steer it away. In areas where nature can take its course, we simply monitor the fire. This allows the rich nutrients trapped in dead needles, leaves, and fallen logs to be released.

The new approach aims to restore ecological integrity through the use of fire.

This comes as no surprise to local Indigenous communities. Respect and gratitude for fire is woven through Anishinaabe stories and language. Fire is as natural and inevitable as the changing of the seasons.

In the words of the late Elder Whitehead Moose, Pikangikum First Nation, “The Creator has a match and that match is the thunder-bird. He brings that match to the land when the forest gets too old and can’t grow anymore.

“So the thunder-bird comes to earth. After the forest is burnt, new growth starts.”

Just as spring follows winter, fire revives the land. It may look like a charred wasteland, but it greens up quickly.

Within days, pops of bright green appear. Suckers climb out of burned birches.

In weeks, the forest floor is a sea of lush new plants and shrubs.

Within months, Jack Pine seedlings are poking up. The birch suckers and other vegetation are already waist high.

“It’s really beautiful,” says Christine. “An incredible amount of wildflowers grow after a burn. The blueberries and raspberries boom.”

A year later, the area is transformed. Jack Pine seedlings inch higher. Fungus and insects break down the burned trees. The hammer of Black-backed Woodpeckers, mining for insects, fills the air.

Wildlife returns to the area. Moose and rabbits move in first. Predators like marten, lynx, wolf, and bear follow.

As the decades pass, the Jack Pines grow tall and the lichen grows thick. That’s when the caribou move in.

A few decades later, the stand of pines starts to break down, waiting for the lightning strike that begin the cycle again.

In case of fire

Not all fires can be monitored and left to achieve ecological benefits.

“Public safety is absolutely the first priority,” says Christine. “If an area of a park is unsafe for travel and threatened by a forest fire, or even heavy smoke, that area can be evacuated and closed to travel.”

Information about closed areas is posted on the Ontario Parks website and social media. The province has an interactive map, as well, where you can find real-time updates on active fires.

Understanding the benefits of wildland fires does not mean the end of campfire bans.

Obeying fire bans keeps everyone safe. Humans have given Mother Nature more than enough “help” in that department. “If you respect fire, the fire will be good to you. It will keep you warm on cold days. But you also have to have respect and be careful with the fire. You have to use it wisely. If you use it wisely, it will keep you. If not, it will burn all of your possessions.” — Elder Solomon Turtle, Pikangikum First Nation