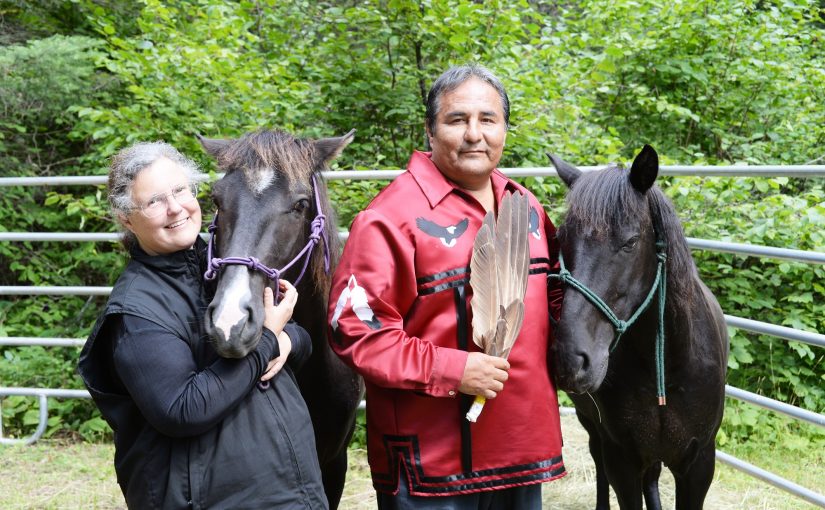 Guess what endangered animal will be mingling with visitors at Quetico Provincial Park this summer. Need a hint?

They wouldn’t say “neigh” to a selfie.

If you guessed the Lac La Croix pony, give yourself a gold star. Herds of these wild horses once made Quetico Provincial Park their home. But unlike most wild creatures, the ponies are so friendly, you can pet them and feed them.

“These little ponies used to live almost on their own in the woods of the boreal forest,” says Quetico Superintendent Trevor Gibb. “When I first heard about them, I thought, ‘No way! How did they survive out there?’ But they’re tough little guys. Apparently, they were living feral—semi-wild—near Lac La Croix First Nation until the ’70s.”

Most people have never heard of this small Canadian horse, bred as winter transportation by the Anishinaabe.

But Darcy Whitecrow remembers them well. He was raised in Seine River First Nation, an hour west of Quetico Provincial Park. The reserve once had so many horses, it was known as Horsecollar Junction.

“There’s a direct connection to this horse for all our people in the local area here. There were no roads, so the horse was really valuable.”

“They ran free like the deer,” says Darcy. “Every now and then, when [people] needed them, they just went out and got them.”

It was a fair trade. The Anishinaabe fed and sheltered the horses through the winter, when forage was scarce and predators were hungry. The rest of the year, the horses looked after themselves. But as the North opened up, the internal combustion engine moved in. Motorboats, skidoos, power saws and trucks put the Lac La Croix pony out of a job.

By 1977, only four remained. They lived in Lac La Croix First Nation on Quetico’s southeast border.

A few years ago, they decided to take in some ponies and launch a program of their own in Darcy’s hometown. Grey Raven Ranch would reconnect Anishinaabe youth to nature, their history and their culture. And the teens would help save the breed their ancestors developed.

“We’re the only ranch that’s brought the ponies back to a reserve where they were originally bred,” Kim says. “I think that’s pretty special.” “When we first brought the horse back to Seine River, we were honoured at the powwow,” says Darcy. “The elders were all sitting in the middle doing a pipe ceremony, giving thanks.

“Some of them hadn’t seen a horse in 50 years. There were tears in their eyes.”

Since the non-profit ranch opened, more than 30 reserve youth have trained and cared for the ponies. Each teen discovers hidden talents.

“Fred has an eye for sharp stuff that could poke and hurt the horse,” says Kim. “Phil, he’s our hay-packer. He can get more hay into a truck than anyone I ever saw. Serene is our trainer-girl.”

It works both ways Not every skill develops in the paddock. The teens also pick up business management from running the non-profit and learn about the science of breeding horses.

Above all, the kids build important life skills, like self-discipline, confidence and patience.

“You think you’re training a horse,” says Darcy, with a grin. “But the horse is actually training you.”

News of their success is spreading, says Darcy, and that’s raising interest in the preservation of the Lac La Croix pony.

“We just passed a resolution at Treaty 3 level to support the cause of these horses. The five- to ten-year plan is to develop programs in every one of the First Nations so they, too, can give their youth the direct experience of working with horses in their own communities.”

He knows just the team to call on.

“We trained our youth, and our youth can train theirs.” This historic horse breed is also stirring up questions among scientists. Supposedly, the modern horse disappeared from North America 10,000 years ago, and was reintroduced by European explorers.

Anishinaabe elders disagree. They say the ponies were “always here.”

They may be correct, says Kim, a semi-retired Harvard professor. “There’s a lot of research right now about whether the horse really did disappear from North America.”

The breed evolved with special adaptations. A nose flap that keeps out the cold. Small furry ears to discourage pesky blackflies. A genetic marker that does not exist in the Spanish mustang. Then there’s the archaeological evidence—pictographs and bones from centuries before Europeans found their way to North America.

You can learn all about it at Quetico Provincial Park. For the past two summers, the park has invited Grey Raven Ranch to share the horses and their rich history with the public. “We have a mandate to provide natural heritage and cultural education about the current and historic features of the park. So it was a natural fit for us,” Trevor says. “And everyone loves horses and ponies. We knew it would be a crowd-pleaser.”

It certainly was. “Ponies in the Park” remains Quetico’s best-attended education program.

“Young people, in particular, are smitten with the ponies,” says Trevor. “They love being able to get so close to them. And adults are fascinated by the unique history of the breed.”

The horses stay at Quetico all weekend. Youth from Grey Raven Ranch handle them, show off their riding skills and answer questions.

“People come right into the pen. Whole families with their kids—feeding them, petting them, taking pictures with them,” says Darcy. “And the horses, they’re loving it. Over the period of a couple of days, we had more than 150 visitors.”

See it for yourself Come to Quetico Provincial Park for your own close encounter on Labour Day weekend. The ponies will meet you in the day-use area of the Dawson Lake Campground.