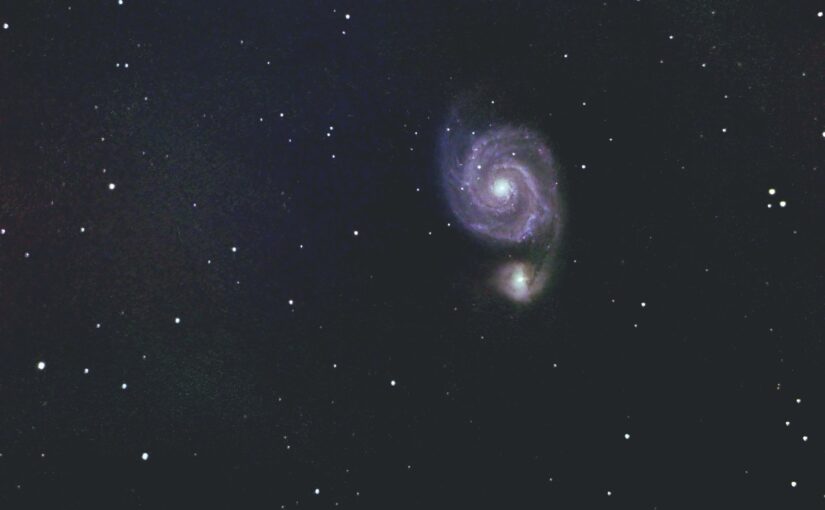 After a typical Canadian winter, we look forward to the spring season and the changes that go with it: fresh flora fragrance, natural forest lushness and the flowing water tranquility.

Spring also ushers in a new landscape of interesting objects visible in the night skies: the galaxies.

Why is spring a good time for galaxy-gazing?

While galaxies can be seen all year long, the springtime night skies are the best time of the year to see the diversity and multitude of amazing galaxies. This galactic assembly occurs because we gaze towards large clusters of galaxies that are relatively nearby during the spring months.

In addition to the proximity of galactic clusters, the dust that exists within our own galaxy thins out somewhat in the direction of the skies best seen in both the spring and the fall season.

Off to the races

Hundreds of years ago, with the invention of the telescope, many astronomers gazed the skies for what they perceived as cosmic interlopers: the comets.

To them, these comets appeared as fuzzy, cloudy or nebulous smears of light, hard to detect with their primitive telescopes, and even harder, if not impossible, to see without a telescope.

At the time, the discoverer of a comet was rewarded by having their name associated with that comet forever. So the race was on to be the first one to find a new comet.

There was just one problem with this race: the false alarm created by the appearance of other fuzzy, nebulous patches in the sky that do not move and, therefore, are not comets. Astronomers, such as Charles Messier, started producing lists of these annoying smears of light to help them avoid accidental false alarms in their quest for fame and posterity in comet discovery.

Thus began the list of some of the most fascinating objects of discovery: the cosmic nebulae.

Over time, and with ever greater quality of telescope, observers realized that these cosmic “nebulae” were actually of different compositions.

Some seemed to contain hundreds, thousands or hundreds of thousands of stars. Today, we call those clusters. Some retain their ghostly appearance, and they retained the name “nebula” (see last months’ edition for a look at the Orion Nebula). And then there was one remaining group that was still in confusion up to about a hundred years ago or so: the “galactic nebulae.”

The debate was only answered following Edwin Hubble’s discovery of the expanding universe just over 90 years ago.

Where life and death occur

Galaxies are now recognized as a large collection of stars, dust, and gas, and formed out of the ripples in the universe at the time of the Big Bang itself.

Galaxies are also shrouded in dark matter, the name we give to a tremendous amount of something that cannot be easily seen, but whose force of gravity can be observed.

They are dynamic places with star birth, star death, and collisions of clouds of dust and gas. They are also quite likely teeming with life (although we have not discovered anything beyond Earth as yet).

They also may interact with other galaxies such as seen in the photo at the top of today’s post.

When the stars collide

The remnant of a recent interaction is seen in this fine view of a starburst galaxy – M82. This spiral galaxy, seen nearly edge on, had a recent close encounter with its neighbour (M81).

The result of the interaction has caused a tremendous amount of collision of gas clouds that, as we learned in regard to the Orion nebula, serves as the principal mechanism for star birth (note the reddish area around the central bulge of the galaxy).

When we see images of galaxies with stars in them (such as the first image at top), we are seeing all those stars in front of that distant galaxy. Those stars are over 1,000 times closer to us than the galaxy itself!

We have discovered some truly massive galaxies out there.

One of them, labeled M87, is an elliptical galaxy (a galaxy that does not seem to have any dust lanes), and has as many as ten times more stars than our own Milky Way galaxy.

Observed for some time now, M87 appears to have a huge jet of highly focused plasma (charge particles) moving at extreme speeds.

Astronomers believe that supermassive black holes play a major role in the shape and structure of many galaxies, and we are just beginning our journey of discovery into these fascinating and bizarre objects.

Only by continuing to study the supermassive black holes in other galaxies can we learn more about their importance and the role they play. This, in turn, helps provide a better context for the study of our own galaxy — our cosmic home.

Come back next month for “Galaxies – part 2”

We will discuss the appearance of our own Milky Way Galaxy, both from within and from without.