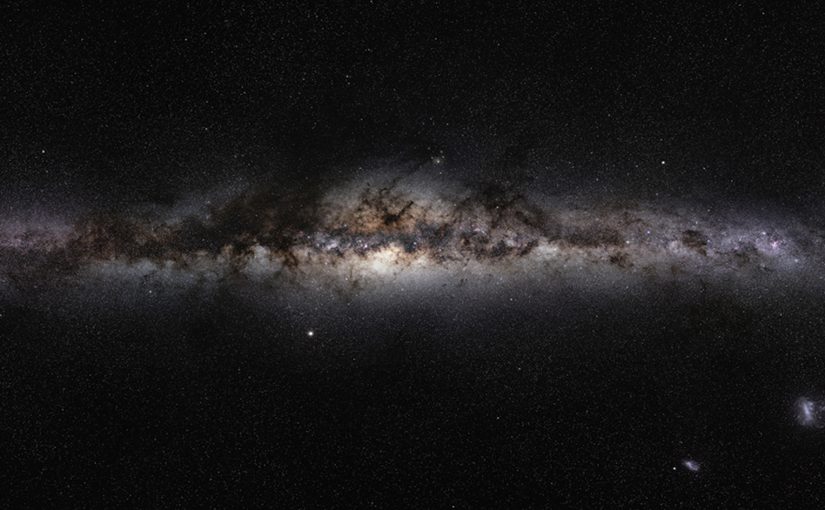 On a clear dark summer or winter night, you can see a cloudy band of light traversing the sky.

This light is known as the Milky Way.

The Milky Way actually has nothing to do with dairy. Instead, it’s the term for the light of hundreds of millions of stars that are so far away we cannot see them as individual points of light. Instead, we see their combined glow as a fuzzy, glowing band of light. While the ancient Greeks may have speculated that this was so, observing the glow of the Milky Way was due to the light of stars was discovered by Galileo using his “optic tube.” Although Galileo was not the inventor of the telescope, he is the first one that we know of who used a similar device to study the stars.

In the photo below, a zoomed-in portion of the Milky Way reveals the myriads of stars within.

See if you can see the Summer Triangle in the zoomed in portion (hint: Deneb is at the left, Altair at the lower right with Vega above and left of centre in the zoomed image). In a galaxy far, far away

It is difficult to comprehend that this band of light is actually a galaxy, especially because we reside within the Milky Way Galaxy and orbit around its centre.

As no one has yet to travel beyond the Milky Way Galaxy, we have to conceptualize our galaxy and our position within from what we see of other galaxies.

We also use what we can measure and understand from the many types of technologies, observations and theories that have been put together in the past few hundred years.

To understand the Milky Way Galaxy better, we need to imagine we are looking at it from the outside, and then travel above it to see its structure.

To do so, let’s imagine two dinner plates stacked together facing towards each other (photo below left). This represents the rough shape of our Milky Way galaxy as seen from the outside. It is somewhat similar in shape to the photo at right taken by the European Southern Observatory. From this perspective, the Milky Way has a flattened disk shape with a central bulge.

Now, let’s imagine we are going to travel up and over the top of our galaxy.

As we do so, we will see the flattened disk extend outwards as in our plate (below left) and in this NASA conception of our Milky Way galaxy (below right) Finally, as viewed from above we see the full shape of the disk and all of its splendors.

This is evident in the NASA concept (below right). At left, perhaps we can only imagine the plates being used to support a Milky Way chocolate bar! Our galaxy is one of an estimated two trillion galaxies which may exist in the part of the universe we can see.

A galaxy is an oasis of hundred of billions of stars, gas, and dust amidst a relatively barren universe.

Between galaxies lies very little matter. But within, lots of material produces stars, planets and life, at least as we know it here on Earth.

Galaxies come in many different shapes and sizes. Our galaxy type is known as a “barred spiral.” This is because the arms have a spiral structure, but a large central bar spans much of the central part.

Our Milky Way Galaxy has a supermassive black hole at its centre. This affects stars and other material in the nucleus. Like most galaxies, the Milky Way slowly rotates, and we go along with it. It takes around 240 million years to go around once. Since our sun is around 4.6 billion years old, we have gone around the centre of our galaxy more than 19 times.

Why the Milky Way looks different by season

Understanding our place in the Milky Way as seen in the NASA concept image (above), makes it easier to understand why the summer Milky Way looks so much brighter than that of the winter.

As the earth goes around the sun, we see different stars in the night sky at different times of the year. During the summer, we peer out towards the central portion of our Milky Way Galaxy (the centre is located to the right of our August constellation – Sagittarius).

However, during the winter, we have moved halfway around the sun, and as a result we gaze out in the opposite direction from summer. This means we are looking outwards from our galaxy and seeing far less of the Milky Way’s structure.