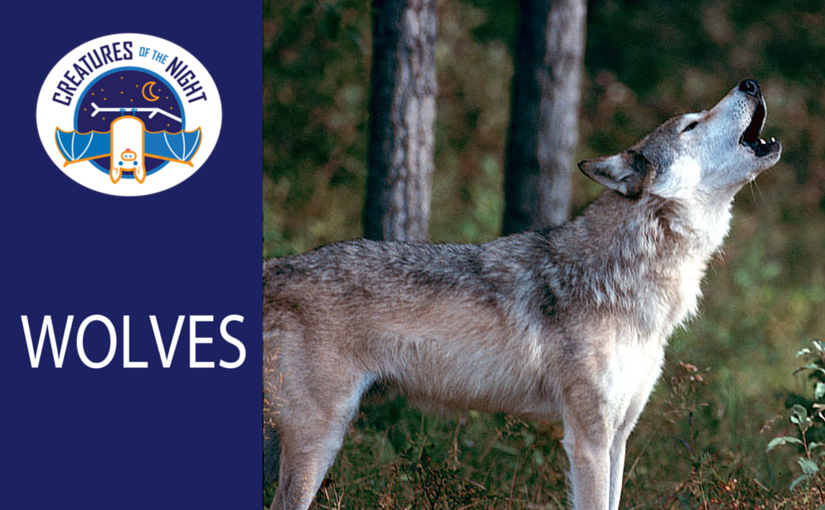 There are few sounds more haunting than the howl of a pack of wolves in the dead of night. It makes the hair on the back of our necks stand up!

But are these creatures really the “big bad wolves” we remember from bedtime stories?

Until the early 1960s, wolves were considered vermin, and were hunted, poisoned and snared in Ontario – even in Algonquin Provincial Park.

But since the introduction of the Public Wolf Howl at Algonquin in 1963, interest in wolves has grown, and we’ve come to see them less as the ferocious predators of childhood tales, and more as the intelligent animals they are. Rick Stronks, the chief park naturalist at Algonquin, has studied wolves and has great respect for them.

Here are just a few things he’s learned about these highly intelligent animals over years of observation:

Wolves travel in packs, which are really family units of 4-6 wolves. Families include a breeding pair (the alpha male and alpha female) and their new pups, as well as some of their adult offspring.

Wolves are part of the dog family. In fact, dogs are domesticated wolves. Wolves live between 5-7 years. Their biggest predator is humans.

Wolves work as a team to eat

Our wolves prey mostly on deer, but will take down a moose if they can. A deer will last the pack about 2-3 days. They will feed on a moose for about a week

Only one out of every 10 attempts at catching prey is successful. And there is a hierarchy to eating – it’s a species survival tactic – with the breeding pair going first. Wolves often hunt at night, but wolves can also be on the prowl in the late evening or early morning.

They’re not the fastest animals around – though they can reach speeds of 60 km/hour — but they have great stamina and can run long distances in pursuit of prey.

Female wolves give birth to 4-7 pups a year in a den that she digs for them. The pups will nurse for the first 6-8 weeks.

After they’re weaned – but before they’re strong enough to hunt on their own – the pups chew on their parents’ mouths, which release regurgitated, partly digested food which they “wolf” down. When the pups outgrow the den, they’re moved to a large, open area called a rendezvous site. It provides protection, shelter, water and small animals to feed on. Here, the pups hone their hunting skills.

Researchers believe that there are three reasons wolves howl.

One is to keep in contact with other members of the pack: “I’m over here. Where are you?” Another is to protect their territory from intruders: “This is ours. You’re not welcome here.”

And the third reason they howl is social: to bond with one another. Like we said, wolves are family animals.

Our ecologists placed audio recorders Killarney Provincial Park in 2016 to record early morning birdsong. Listen for one of the park’s resident wolf packs practicing their howling in the background…