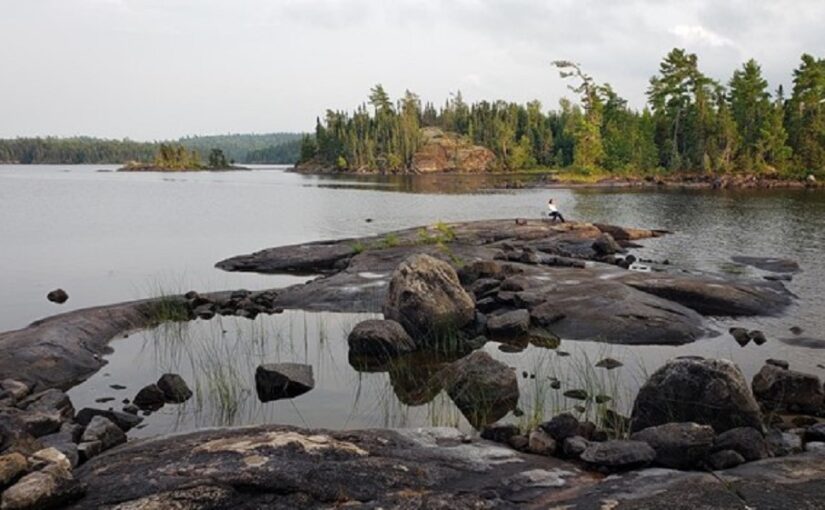 Today’s post comes from paddling enthusiast Dave Caughey who, along with his wife, recently made the trek to Quetico Provincial Park.

For years, my wife and I longed to visit Quetico Provincial Park. We had heard the canoeing there was awesome, through a terrain peppered with countless lakes, and routes that could involve days between portages!

But Quetico seemed mind-bogglingly far from our home in Ottawa—1,600 km to be exact! Who would be compelled to drive that distance, just to go paddling?

Meanwhile, we were planning for our 30th anniversary, and had mapped out a big trip to Europe. The pandemic had other plans. And then it struck us… we were completely willing to spend a long, full day travelling to an overseas destination, yet we thought Quetico was unreasonably far?

We began to realize that Quetico isn’t really much further, yet the trip is remarkably different. One involves sitting motionless and cheek-by-jowl in an airplane or in busy and noisy airports, and the other involves driving through breathtakingly beautiful scenery around Lake Superior all with the freedom to pull over whenever we wanted to stretch our legs or grab some chip-stand poutine.

So we pivoted, thought, “Why don’t we make Quetico our anniversary trip?”, and began to plan in earnest.

Planning the trip to Quetico

For the travel to and from Quetico, we decided to spread the travel over a couple of days and make the journey an actual part of the trip, i.e., slow down and enjoy the journey.

We investigated what we could see along the way, and where we might stay. There are a lot of options, from Pancake Bay to Agawa Canyon Trail in Lake Superior Provincial Park, to the gorgeous long beach of Neys Provincial Park.

In the end, we decided to make a long day (almost 11 hours) drive from Ottawa to Lake Superior Provincial Park, and then a more relaxed day (seven hours) along the north shore of Lake Superior to Quetico; and save most of our side excursions for our trip back. Our primary rationale was that we wanted to arrive for our paddling trip in tip-top shape, and not have something like an ankle twisted on a casual hike jeopardize our ultimate goal of undertaking a long backcountry paddling trip.

Our paddling route in Quetico

After some discussion, we decided we wanted to do an 8-night/9-day trip.  This was a bit longer than our typical 5-6 night trips, but we figured if we couldn’t manage a longer trip, then we really had no business being married for 30 years.  Our next step was to start looking for a route that would fit our skill and fitness.

Neither my wife nor I are inclined to just lounge around. If we’re on a paddling trip, we figure we might as well actually be travelling and exploring the wilderness. So, we planned on doing between five and eight hours of travelling per day, including a relaxed lunch break and an hour or two for portaging. We know that we paddle at about 5-6 km per hour, meaning that we were looking at an average of 20 km per day.  And if we budgeted a day or two for not traveling — due to bad weather or because we loved our location — then we decided we should plan for about 140 km.

At this point we started pouring over the waterproof map we ordered from the park to figure where 20 km/day could take us, and how much of a loop we could do. Ultimately, we plotted a route that had us head east to Pickerel Lake, then punch down south through Dore, the north end of Sturgeon, and into Russell Lake. From there, we’d explore the falls in and around Chatterton Lake and Keats Lake, then head west into the main part of Sturgeon Lake and make our way back to Nym via Walter, Jesse and Maria Lakes.

Since it’s designated as a wilderness park, Quetico has no reserved sites — you’re free to camp wherever you can find a spot.  But knowing where there are usable spots (there are more than 2,000 in the park) is helpful when route planning. There is a website called PaddlePlanner.com that has map markers and reviews for many of the known camping spots. But take the reviews with a huge grain of salt! (People have given one-star ratings to spots because it rained!) Instead, we found it helpful to simply record the location of many of the known camping spots on the lakes we were expecting to paddle through, so we’d know whether the spots were at the east or west end of the lake, or on an island, etc.

It’s also worth noting that the portages aren’t marked, either. On some of the more-travelled lakes, they’re easy to find. But in some of the lakes, finding the portage requires the ability to locate yourself, and the portage, on a map, and peering into the trees looking for something that looks like a trail. Some GPS devices (e.g., our Garmin InReach) come pre-loaded with topographic maps that even show most portages in Quetico! But don’t rely exclusively on GPS maps, as we found a couple of instances where they were off by 100 m or so. The official park map is always reliable, and map-reading skills are a must whenever venturing into the backcountry.

We were a bit nervous at the outset of the backcountry portion of our trip because the forest fires in the southern part of the park had resulted in a closure zone that extended right to the main part of our route.

Indeed, when we put in at Nym Lake, there was a distinct smell of smoke, and the skies were hazy with the sun only appearing as a dim orange disk even though it was mid-morning! After three days, the wind changed direction and the skies cleared up, but for a while it was pretty surreal.

We enjoyed some excellent tailwinds for our first two days and managed to get to Russell Lake in only two days. There, we found an absolutely gorgeous camping spot on a point, where we’d eat our meals and marvel at the skies.

From our Russell Lake spot, we did a day trip into Chatterton and Keats Lakes to view the various waterfalls. Indeed, many of the falls are gorgeous, but the Snake Falls really captured our imagination.

On one side of an island, the river gently spills over smooth rocks with the effect that it creates natural infinity pools that were warmed by the sunshine. It was a magical place, and few if any people venture into Keats Lake, so we had the entire place to ourselves.

We were tuckered after three intense days of paddling, so we took a down day and poked around Russell Lake and explored Chatterton falls from the bottom, fished and relaxed.

The next day we enjoyed a portage-less 18 km paddle to a storied spot on an enormous sandy point along the south shore of Sturgeon Lake.

This spot has been used by First Nations for thousands of years and had been the site of a fur trading camp for many years.

We then started working our way north, but because we’d made better time than expected, we were either going to finish a day early or have several very short days. So instead, we added a side excursion to Oriana Lake.

Unfortunately, the lack of rain that had contributed to the fires in the park also meant that the water was at historic lows. Consequently, some of the rivers that were supposed to be paddle-able were nothing more than a shallow trickle in a muddy bed.

We had to line our canoe up rivers, wading through reeds and cut grass, sometimes for a kilometre, just to reach the start of a portage, and found that we had to portage long sections of a river that should have been paddle-able.  Ask the Park staff about water levels when planning your route!

Toss in an unfortunate slip on the rocks and a nasty cut that needed first aid (nothing says “anniversary trip” like coming home with blood-soaked clothes and stitches from the Atikokan General Hospital!), and it ended up taking us almost five hours to do the last two km of the day’s travel.

But that day did serve to underscore the importance of carrying an emergency satellite communication device (like a Garmin InReach or SPOT) on a trip like this, because if our injury had been more serious (e.g., a broken bone) with us being stuck halfway along such a difficult portage, we might have had to push the SOS button. In Quetico, you truly are in the wilderness, so carrying an emergency device is just common sense.

The next morning, we enjoyed an uneventful paddle out and completed what turned out to be a 167 km journey.

As per our plan, we took it more slowly on the drive home. We did the 23 km “Top of the Giant” hike at Sleeping Giant Provincial Park and were rewarded with spectacular panoramic views.

We drove past the sunset-drenched cliffs and islands along the north shore of Lake Superior. We strolled along the empty windswept beaches at Neys Provincial Park.

When planning your trip, keep the following in mind:

We look forward to going again, as we feel that our nine days of paddling barely scratched the surface of this magnificent park.