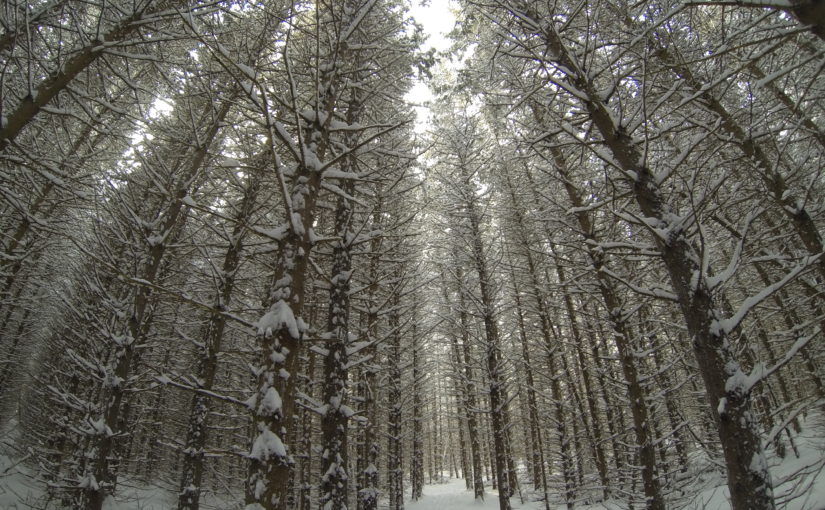 When Killarney Provincial Park was established in 1964, park managers faced a problem: what to do with old fields belonging to former homesteads within the park’s boundaries.

To prevent the spread of weedy species, they decided to plant trees, including White Spruce and Red Pine, and regrow the forests.

Over 50 years later, these plantations are fully mature, but a new problem presents itself: these areas do not resemble natural forests at all.

The trees are all the same type and unnaturally close together. This means that sunlight has a tough time reaching the forest floor, making a difficult environment for many other plant species to survive in.

That’s why Ontario Parks and The Friends of Killarney Park have started a new experiment to enhance this area’s biodiversity.

The plan was simple: cut down a small area within the tree plantation.

Acting on advice from Ontario Parks’ ecologists and the Friends, Killarney’s team selected a 30 m area of the Tyson spruce plantation, near the Granite Ridge Trail, that could be cleared to create an opening.

By doing this and managing the spread of invasive species, they hoped to encourage the colonization of the opening by native plants and animals. After all, there’s nothing most plants love more than room to grow and access to sunshine.

In May of 2016, experienced backcountry maintenance crews got to work, cutting and removing logs, before finally burning slash piles in November of the next year.

To determine whether this plan would work, the parks team set up four monitoring plots:

They marked each at the centre with a wooden post.

The team completed their initial surveys in September 2018 and then a second resurvey in 2019. In each monitoring plot, they recorded information about the soil, ground cover, vegetation, and more.

So did it work? Did plants and animals return to the clearing?

Comparing data from 2019 to 2018, the results are promising. Both native and introduced species rushed into the opening, but fortunately, the native species seem to have the upper hand. Ontario Parks’ ecologists saw evidence of this in several ways.

First, they took notice of the forest floor. In the cleared area, ground cover was a complex mosaic of materials, including leaves, wood, humus (the organic part of soil), and more.

In the untouched reference plot, it was mostly limited to spruce needles and branches.

Next, they looked at the vegetation present. In the cleared area, shrubs and woody species dominated the plot. The team recorded 17 native species here, up from only eight in 2018.

There were more introduced species recorded in the area as well (10, up from five in 2018). However, they were not abundant, only covering 4% of the plot.

And it turns out, humans weren’t the only ones paying attention to the changes.

In the cleared plot, they saw evidence of the return of migratory birds, deer, raccoons, and Black Bears. Bumblebees especially appreciated the sudden appearance of wild flowers.

In contrast, the team made no such observations from the reference plot.

Ontario Parks recently expanded the research into other locations, including Restoule Provincial Park. We will continue to monitor changes in vegetation for several years.

After that time, we will review the effectiveness of this restoration technique and consider whether the project merits additional openings.

For now, though, things in Killarney and Restoule are looking hopeful.

Conservation and protecting biodiversity are key goals at Ontario Parks. But you may ask yourself, why is biodiversity important in the first place?

Check out this post to see how biodiversity affects you, and what you can do to help protect it.