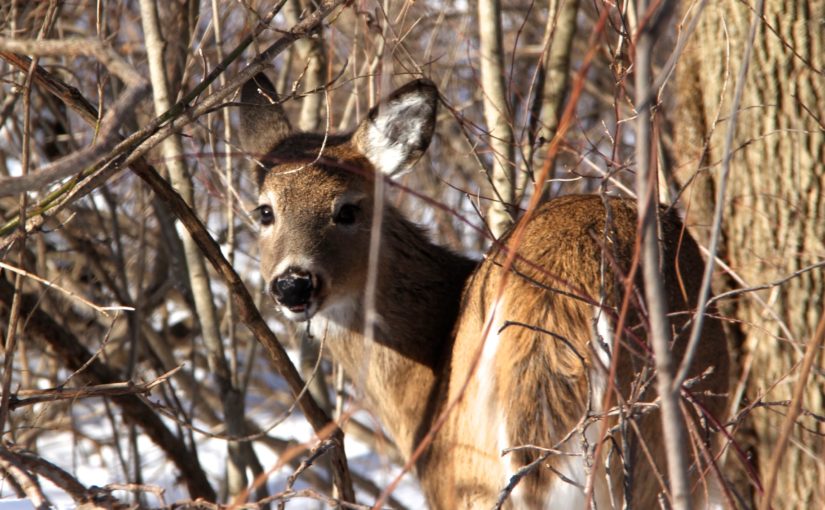 In today’s post, Ecologist Corina Brdar shares the “best part of [her] job.”

I’m an ecologist for Ontario Parks. When people ask me what exactly it is that I do, I have a hard time answering – my job is so diverse and interesting.

So I like to give the example of my favourite job duty: doing winter track surveys for deer.

Why do winter track surveys? Scientists use many different methods to figure out how many deer are in area.  It’s trickier than it sounds – unfortunately, they move! Of course, they move around from day to day like most animals, but they also move in reaction to weather, season, food, humans, and predators.

In winter, they tend to stay in an area that has both food (like juicy tree and shrub buds) and shelter (like large conifer trees). This is the time of year when they can also have a big effect on the forest, as they nibble on those delicious buds. We were lucky to get an early snowfall in eastern Ontario this year, followed by a day or two of clear skies. I took the opportunity to get out and get my first deer track survey done. The procedure I use is based on one that is used in other parts of Canada. I walk (or sometimes ski or snowshoe) a predetermined trail, and count all the deer tracks that cross it (in a nutshell – there are also some fancy calculations involved). I also keep track of possible predators, like coyotes. I mark each spot with a GPS so we can make a map of deer activity in the park.

By doing this year after year, we can see if deer are becoming more common, less common, or staying the same in our parks. I’ve been doing this for years and it’s interesting to notice where their favourite hangouts are, who hangs out with friends, and who’s a loner, based on the glimpse I get through the story in the snow.

Doing some winter tracking of your own? Here are some tips for winter wildlife detectives!