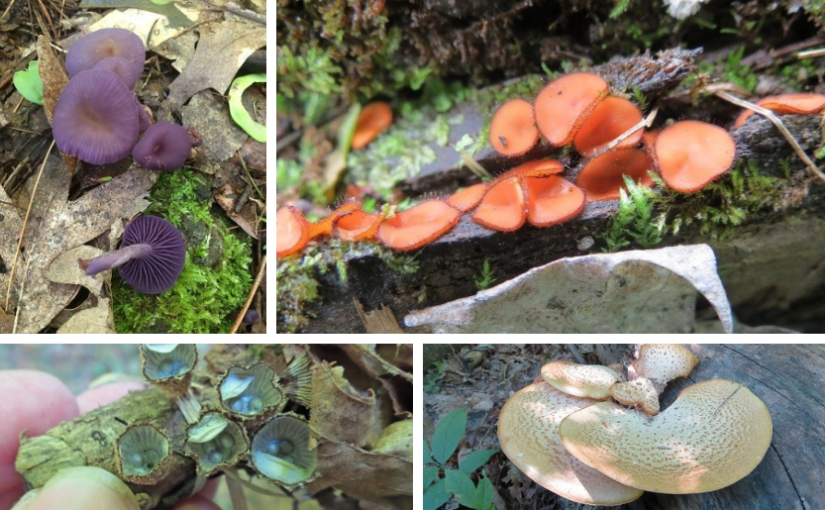 This blog is not going to be an identification guide; nor is it going to be packed full of mind-blowing facts.

Instead, it is more of a celebration of the fungal diversity found in Ontario.

I hope that along the way you’ll be encouraged to take a closer look at these fascinating organisms that play such a critical role in maintaining the ecological integrity of our parks!

Chicken of the Woods

To get us going, Chicken of the Woods (Laetiporus sulphureus) is a fairly easy one to find and recognize. The vibrant reds, oranges, and yellows that this one sports brighten a campsite on even the most overcast of days.

Each of the “shelves” can grow as large as a small dinner plate, and the whole thing can have many more shelves than the one shown here. It is typically found on decaying deciduous tree trunks and can be seen throughout the season.

Despite being found in northern zones from North America to Asia, this next one is easily overlooked, as it stands at only 15 mm tall. This is the Fluted Bird’s Nest (Cyathus striatus), named as such because the spore-containing peridioles look like little bird’s eggs.

During rain, the “eggs” are propelled into the air and attach to vegetation. It is believed the spores are ingested by herbivores — their poop providing a great place to restart their life cycle.

It is sometimes easier to find a target species by knowing, then taking a closer look at, its host.

Although the Hemlock Varnish Shelf (Ganoderma tsugae) can be found on a variety of decaying firs and other conifers, it is aptly named due to its preference for Eastern Hemlock. This species first appears in the late spring as a white blob that matures by mid-summer into the hard yet shiny “bracket” that you see here.

This bright, shiny surface is very distinctive. It is believed this genus of fungi has medicinal properties. I had to include this next one due to its stunning purple-violet colouration — how often do you see this sort of colour in nature?!

This one is aptly named the Amethyst Deceiver (Laccaria amethystina), amethyst for its colour and deceiver since the colour fades rapidly, making it hard to identify.

It is usually found singularly or in small groups, and is most commonly associated with beech though not as fussy as the previous species.

The Amethyst Deciever is most commonly seen in late summer.

The Dryad’s Saddle (Cerioporus squamosus) is a species most commonly seen in the spring.

It is found across North America, Europe, Asia, and even Australia, and can grow to almost 50 cm in diameter! It plays a particularly important role in the decomposition of dead and decaying hardwood trees (elm is a favourite), but is occasionally also found on living maples.

It is another of the “bracket” fungi, but the pale brown cap with intricate patterning is quite distinctive.

Our final fungi are the Eyelash Cups (Scutellinia sp.).

These distinctive and colourful fungi are small, with a disc when mature (or “cup” when younger) of just 1 cm (often much less) in diameter. These cups are entirely bordered by the long “hairs” that give the genus their common name. (I honestly don’t know the purpose of the  “eyelashes,” but if you do, please let me know!)

If you want to find them, they are widespread and relatively common on damp to very damp, well-rotted deadwood, and other vegetation from June onwards.

Go forth and find some fungus!

These fungi were all photographed at Murphys Point Provincial Park.

Please remember: it is not easy to identify the thousands of species found here in Ontario, so please be very careful if examining them, as some can be quite toxic. And — of course — bear in mind that it is illegal to harvest mushrooms in provincial parks, so please leave them where they grow.

A better way to enjoy and share their spectacular colours and shapes is to take a photo home with you.

Adding photos of your finds to iNaturalist may bring you an identification, but if nothing else, your additions will add to our growing knowledge of the province’s incredible biodiversity.

What fungi have you spotted this year?