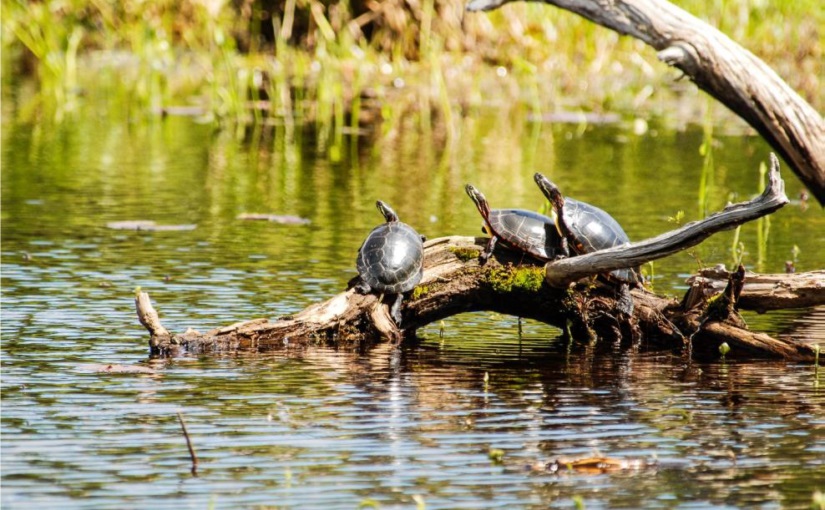 Spring at Grundy Lake is a quiet time of year. The lake waters are cold from the melting snow and ice, birds are just starting to arrive from their long migrations, and visitors are few and far between.

Park staff, however, are often busy and bustling about as they begin to prepare for another season of campers.

Adding to the bustle are the co-op students from Cambrian College’s Environmental Technician Program.

One of the first tasks for our visiting students are vernal pool surveys.

Vernal pools (small temporary water bodies that form in the spring and dry up by late summer) are relied upon by many amphibian species as spawning areas. This is because they provide a safe environment for their young to grow. There are no fish in these temporary pools, and fish like to eat tadpoles!

We donned hip waders (we had just enough for all eight of us), and started our sweep of the vernal pools that dot the park’s forests.

Healthy populations of frogs and salamanders are a good indication of a healthy park environment.

Searching for, identifying, and tallying gelatinous masses of salamander, frog, and toad eggs is a daily pursuit, and allows us to monitor the health and biodiversity of these valuable ecosystems from year to year.

One student noted odd green algae growing on and inside one of the we found. Curious (like any good researcher), he took some pictures and brought them to my attention.

Lo and behold, we discovered after some research that some species of salamander (such as the Spotted Salamander), actually have a mutualistic relationship with certain algae!

The algae feeds off of excess nutrients provided by the embryo’s waste, and while we don’t know exactly why, the salamanders have been shown to grow better with the algae present.

We always learn something new when given the opportunity to explore park habitats!

Getting ready for turtles

Turtles are a big deal at Grundy Lake.

The park’s wetlands provide valuable habitat, supporting a healthy population of several species. As such, they’re a main focus of our wildlife monitoring programs. Every year, our turtles are drawn to the large areas of sun-warmed, easily-dug gravel shoulders along some of the park roads for nesting (especially the trailer-fill station). Unfortunately, this puts mother (and later, hatchling) turtles at greater risk of being hit and killed by a vehicle, something that has caused severe declines in Ontario’s turtle populations.

Hatchling and young turtles face extremely low survival rates with plenty of natural predators – and that’s if they get a chance to hatch in the first place! These turtle eggs are often dug up and eaten by animals like raccoons, foxes and skunks.

Species survival depends on adult turtles producing lots of eggs over a very long lifetime, and turtles need between 8 and 25 years before they reach reproduction age.

A vehicle strike can be a devastating blow to the population due to turtles’ slow recovery rate.

To remedy the situation, we installed turtle exclusion fencing along some of the more high-traffic sections of park road. The co-op students got to work digging a shallow trench and pounding in stakes to line the road with black-tarped fencing. Their keen determination through rain, sun, or clouds of mosquitoes ensured the fencing was up in just three days! The group was also treated to the opportunity to locate and handle turtles as part of the park’s turtle monitoring project! Students were taught by Ontario Parks ecologists how to “process” turtles by:

Beginning in 2013, the Grundy Lake Turtle Monitoring Project involves volunteers, Ontario Parks ecologists, and park staff tracking the movements, nesting sites, and characteristics of the park’s turtles. This is all in an effort to learn more about their habitat use and nesting behaviour, which helps us better protect these incredible animals.

New appreciation for a common bird

While the students certainly had the opportunity to learn about our local flora and fauna, sometimes having a new set of eyes in a situation can create a new experience for ourselves as well. One of the students, Rutvik, had researched parrots and the effects of pollution on their populations near cities in India. The avid birder of our group, he was constantly working to improve his identification of North American birds.

One day, while walking back from pulling an invasive plant species called Garlic Mustard (another resource management task the students participated in), Rutvik asked about a bird that was calling.

It was the familiar jay jay of a Blue Jay.

When I showed him a picture of the bird, his admiration for it gave me pause for a moment. To think of these common birds as so highly regarded made me rethink my own view of these stunning and intelligent birds.

Not only does the partnership with Cambrian College at Grundy Lake provide enriching experiences for students and staff alike, it makes valuable contributions to park management and science!