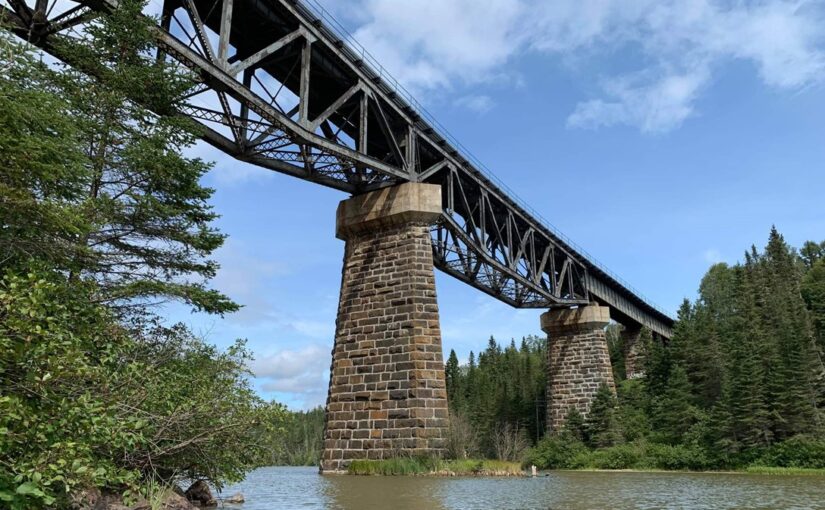 While some parks can boast a connection with the Canadian Pacific Railroad (CPR), few parks are “tied” to the railroad as closely as Neys!

Maybe you’ve driven across the tracks when you’ve entered the park, heard the whistle blow as you curl up around an evening fire, or had the chance to paddle under the trussel bridge that spans the Little Pic River.

Surrounding Neys, you are reminded of the CPR and its historical significance to the park and to Canada.

The story of the CPR began in the 1800s, when Canada was funding the construction of a coast-to-coast railway system.

This was an unprecedented effort with many challenges along the way, including the north shore of Lake Superior.

The Lake Superior section of the line was not a task for the faint of heart.

The rolling hills between Marathon and Terrace Bay were made of granite which had to be blasted away, resulting in over $7.5 million being spent on explosives, the equivalent of just over $199,776,470 today.

Nitroglycerin and dynamite were the explosives of choice at the time, and without the modern machinery of today, the exploded rocks and debris had to be removed manually by horses and labourers.

All told, these challenges led the Lake Superior section to be one of the most expensive sections of the railway to complete.

Putting in the work

As you can imagine, the working conditions were gruelling.

The construction brought with it a need for workers to the area. Men who were new immigrants from the British Isles, Europe, and China made up most of the workforce.

Workers had to contend with the rugged Northern Ontario elements, including swarms of blackflies and mosquitos, the choking rock dust from the blasting, and the general pain and fatigue associated with long hours of performing manual labour with a sledgehammer.

The work was dangerous and many, many men lost their lives.

Despite these extreme obstacles, the men kept working on their mission through this perilous Northern Ontario landscape.

After decades of work, the last spike of the CPR was driven in Craigellachie, British Colombia on November 7, 1885.

However, another “last spike”, which signified the completion of the eastern section of the railway, took place right near Neys.

On May 16, 1885, a spike was driven in at mile 102.7 at Noslo, Ontario, about a kilometre west of the small community of Jackfish, thus completing the section of rail that connected Winnipeg to Montreal.

During the construction of the railway, sidings, low speed railway tracks that run parallel to the main line, were built to allow trains to “pull over” to refuel or load supplies.

The siding adjacent to where the park stands today was worked on by a young man named “Doheyneys”, and the siding went on to be named “Neys” for short.

This name carried over to the Prisoner of War Camp (POW) that stood here 80 years ago, as Neys Camp 100. The name just made sense, as the railroad was one of the main reasons this area was selected to house a POW Camp.

Not only did the railway allow the prisoners to make the 64 hour journey from Halifax, Nova Scotia to the camp, but food, supplies, and personnel could also be easily shipped to supply the area.

The sights and sounds of trains are an important part of Neys’ cultural heritage, and we encourage all guests to make sure they practice train safety whenever they are near the tracks at the entrance of the park.

Whether on foot or in your vehicle, did you know that it is illegal to cross railroad tracks other than at a designated crossing?

Trains and train tracks can be dangerous.

Due to their weight, length, and speed, trains do not have the ability to stop quickly in response to hazards on the track.

In fact, an average train travels around 80.5 km/hr and takes at minimum 1.6-2.4 km to come to a full and complete stop!

Trains passing can also swirl up rocks, sticks, or other debris, so it’s best to admire passing trains from a distance.

Remember, stay safe and stay off the tracks!

For you rail fans out there, there are two ideal locations to view passing trains at Neys.

The first is at the park’s boat launch, where you get a clear view of the train bridge going across the Little Pic River.

The other ideal location is on the park’s beach! From here, you can see the train winding through the hills along the shoreline. Be sure to visit both park locations to see a train travelling nearby the stunning landscape of Neys.

Without the trains and the Canadian Pacific Railway, Neys Provincial Park may not be where it is today. In fact, Neys may not have existed at all!

Next time you’re at Neys and you hear a train whistle, remember that is one of the sounds of our history. Choo Choo!