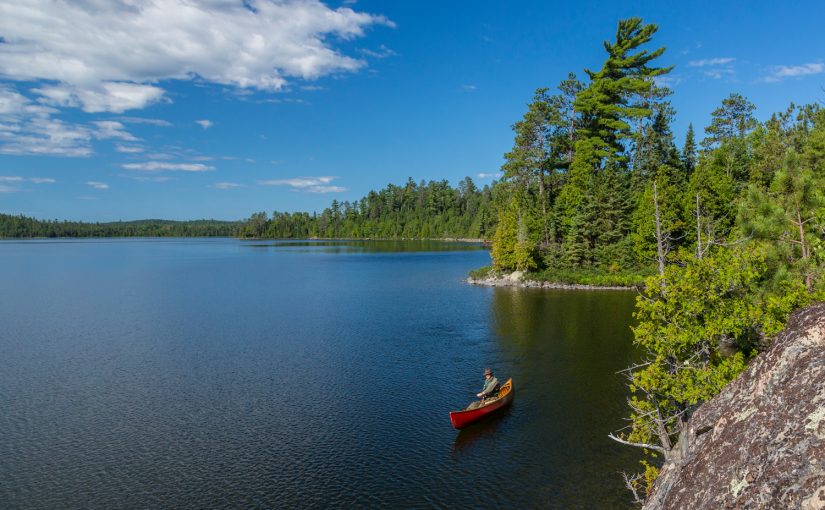 It’s a rugged, time-worn landscape. A fractured piece of the Canadian Shield, with fault lines criss-crossing the roots of ancient mountains for hundreds of kilometres. More than 2,500 lakes fill those fault lines, and at over 600,000 hectares, it’s almost as large as Algonquin Provincial Park.

Is it any wonder so many paddlers lose their hearts to Temagami?

Temagami’s lakes are surrounded by towering pine. Some of the White Pine here are hundreds of years old, and many of the backcountry campsites sit atop rocky points surrounded by tall, straight Red Pine. While Temagami has a long and storied logging heritage, the rugged nature of the landscape meant the loggers left many pockets of pine forests behind, which are now contained within provincial parks and conservation reserves.

Lake Temagami is the hub of the region. It is a huge sprawling lake, 45 km from north to south, and 35 km east to west, made up of long narrow arms like spurs from its centre. There are over 1,200 islands that dot its surface. Bear Island is at the lake’s centre, home to the Temagami First Nation. This nation’s ancestors were the first to walk the portages and paddle the waters here, after the glaciers melted away and before the forests grew.

The Village of Temagami hugs the shores of the lake’s Northeast Arm.

The village was founded in 1903 when the railway to the north was built. A steamship line began supplying lodges, cottages and canoe camps on the lake – Keewaydin, the oldest youth canoe camp in the world, relocated from New England to an island on the lake in 1898, after a canoe trip in the region.

Temagami quickly became a thriving hub of activity for anglers, canoeists and mining prospectors, as well as Lands and Forests canoe rangers.  They followed the ancient portages too, keeping watch for the tell-tale smoke of forest fires.  The Temagami Canoe Company, supplier of cedar-canvas canoes to forest rangers and canoe campers, was established in 1929. Temagami still has several historic fire towers, including the one that sits above Temagami Village on Caribou Mountain – this tower was recently rebuilt, and can be climbed by the public, for outstanding views across the village, Lake Temagami, and the ancient pines of the White Bear Forest Conservation Reserve. Which park speaks to you?

Finlayson Point lies just south of the Village of Temagami, sharing shoreline and part of the Lake Temagami Skyline Preserve, a protected ring of pine forest that surrounds Lake Temagami. Finlayson Point makes a great base camp for exploring Temagami. Climb Caribou Mountain and Fire Tower, and breathe in the amazing view.

Visit on the third weekend in July and take in the Temagami Canoe Festival — a celebration of the canoe — and the Deepwater Music Festival, both on the scenic Temagami Village waterfront.

Check out the historic silver mining town of Cobalt, 45 minutes north of Temagami. This town is a National Historic Site due to its mining heritage. Check out the mining museum, historic buildings and a tour of the historic Colonial Silver Mine. Members of the Group of Seven including AY Jackson and Franklin Carmichael, painted the early 20th-century mining town, capturing the stark industrial landscape. Marten River is the southern gateway to Temagami. The park was first established as a camping in about 1925 on the “Ferguson Highway,” a northern settlement road linking North Bay and the mining town of Cobalt.

Located on the Marten River, the park is connected to a network of waterways that provide great opportunities for paddling, boating and fishing. Nearby Temagami River Provincial Park is an excellent whitewater canoe and kayak playground, perfect for either day tripping or backcountry adventure.

Marten River is home to the “Winter Camp,” a re-creation of the temporary logging camps that were common in Temagami during the horse-logging era of the late 1800s and early 1900s. Every year, on the third weekend in July, the park holds Lumberjack Days, a celebration of those early days, with music, traditional food, and events that test visiting loggers’ skills. The heart of this rugged wilderness-class park is the Lady Evelyn River, a tumbling waterfall-filled wonderland for canoeists. Through portages, lakes and rivers, the park connects to four surrounding waterway parks providing canoeists with 600 km of backcountry paddling. Lady Evelyn-Smoothwater, the four connected waterway parks, and a number of conservation reserves form the core of the most-southerly fly-in canoe country in Ontario.

A fly-in canoe trip is a bucket list experience, but there are plenty of routes that don’t require floatplane access.

Obabika River and several other lakes make up the core of this rambling waterway-class park. It connects Lady Evelyn-Smoothwater with Lake Temagami and other waterways in Temagami’s canoe route network. The park’s highlight feature is the Obabika old growth forest, a huge stand of ancient pine that may be the largest in Ontario. Trails wind through groves of towering trees hundreds of years old.

The Makobe River is a classic Canadian Shield river. Canoeists run it during the spring to get high water so they can run as many rapids as possible before it gets “boney” in the summer, and portaging becomes a must. The river is accessible from its headwater lakes in Lady Evelyn-Smoothwater. Many visitors fly in by floatplane and ride it to the take-out at the Town of Elk Lake. Solace is a beautiful chain of lakes that combine the scenic beauty of Lake Temagami with the remoteness of Lady Evelyn-Smoothwater. Accessed from other parks or by floatplane, Solace is perfect for canoeists seeking solitude.

Make plans to visit your own backcountry dreamscape and discover Temagami!