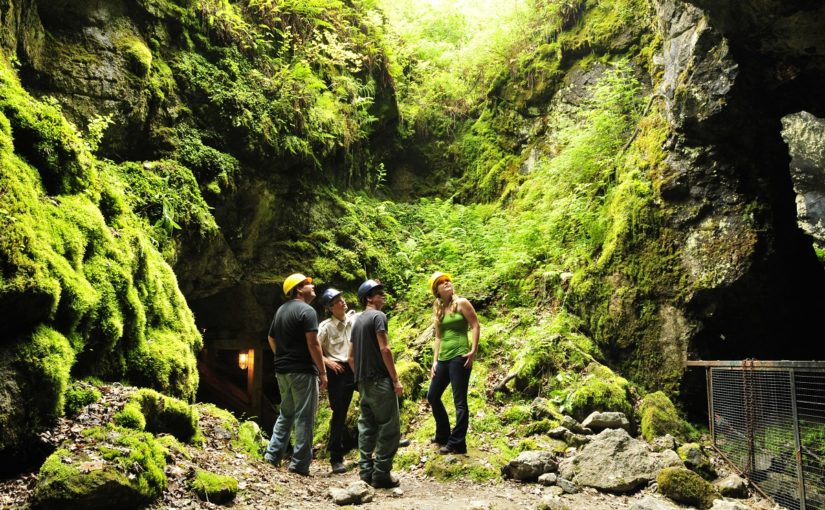 Today’s post comes from the Wandering Wagars, an adventure-loving family travelling the globe.

A great attraction can transport you into another world.

But the staff at Murphys Point Provincial Park took things in a different direction, and ended up taking us back in time.

The Silver Queen Mine tour was the highlight of our visit to Murphys Point Provincial Park near Perth, Ontario.

Geology, caves, and nature have always played a major part in our family’s world travels, but when I joined the Silver Queen Mine tour with my wife Christina and my two boys, aged 5 and 8, we ended up sharing a combination of incredible Ontario history, playful theatre, and stellar scenery that left us begging for more.

We knew that the Silver Queen Mine was one of the most popular attractions at Murphys Point. But the open house event brought the experience to an entirely different level.

The Silver Queen Mine at Murphys Point

When early settlers in Ontario began to branch out, they were met with a challenging landscape of shallow soil combined with tough bedrock. The vast Canadian shield threw up roadblocks that made farming very difficult. To make ends meet, settlers were forced to find new sources of income.

And one thing that the hard rock of eastern Ontario had in spades was minerals. Veins of Mica, Apatite, and Feldspar were discovered. And entrepreneurial settlers began to find ways to take advantage of them.

Murphys Point sits on the southernmost edge of the Canadian Shield. Those who went south from here were spared the harsh landscape. But those who stayed put came up with genius methods of exploiting it.

Work at the Mica mine at Murphys Point began in 1903 and ran until 1920. Today the mine is one of the key attractions of the park.

Visitors come for the cool history, and even cooler air of the mine. One of the most photographed spots is the rock wall by the open pit. It is laden with lush with ferns, moss, and grasses that bring life and colour to the underground world.

The Silver Queen Mine Open House

The Silver Queen Mine tour took us along the Silver Queen Mine Trail. This starts across the street from the Lally Homestead. Along the way we were introduced to fascinating characters from a century ago. They lived here when operations at the mine were in full swing.

Our first chat was with Kate, a young woman hoping to earn twenty-five cents a day hammering and separating Mica at the processing plant up the Rideau River in Ottawa.

As we dipped through the low tunnel to the mining pit, the temperatures dropped. The beams of the tunnel were well-lit so that we could find our way. And as we emerged we discovered Foreman Thompson working on the lanterns. The lanterns were protected by thin sheets of mica that were pulled from the mine. It was just one of many examples of how useful the Silver Queen mining products were.

The boys were fascinated with how they were almost old enough to be working the Silver Queen Mine themselves. We learned about the different jobs within the mine and a little about what makes a “bad” mine employee as well. As Foreman Thompson waited for the next group of candidates to enter the mine, we took some time to explore the 40-metres of excavation that was done during the seventeen years of the mine’s operations.

There are still examples of the minerals, crystals, and veins that once made the Silver Queen Mine such a valuable commodity for those looking to make a living in this part of Ontario. As we explored deeper into the mine we could find spots where we were almost tempted to begin digging ourselves to see what we could find. The thrill of the chase was starting to get to us. We continued our Silver Queen Mine tour by heading out of the cool, sheltered mine and back to the surface. As we reached the surface, the heat of the day caused my glasses to fog up almost instantly.

We followed the trail until we reached a young engineer working on the mine’s boiler. The boiler was broken and he had been having no luck in repairing it. Without the boiler, workers were forced to carry the loose stone by hand up to the surface. Hardly a pleasant job in the July heat.

Our Silver Queen Mine Tour ended at the miners’ bunkhouse where the mine staff slept and ate. The two women running the kitchen shared the struggles of feeding the miners.

We were also told of the strict rules in place to keep the peace at the camp. No alcohol because alcohol leads to fighting. No cards because cards lead to fighting. In fact, we were told there were many things that lead to fighting. So the mine manager decided to ban a lot of things. We all decided that maybe working at the Silver Queen Mine might not be such a fun job after all.

Visiting the Silver Queen Mine at Murphys Point

Tours of the Silver Queen Mine are offered twice a week during July and August.

Please note that — for safety reasons — there is no access to the mine at other times. However, visitors can still walk the trails and follow the self-guided interpretive panels.

Visitors must have a valid park day-use permit or camping permit to take part. You can pre-register at the Murphys Point gatehouse or call 613-267-5060.

These guided tours last 1.5 hours and take you into the mine and along the Silver Queen Mine trail. The Silver Queen Mine Open House, which features staff in period costumes, runs on Sundays during July and August. The open house runs from 10:00 am-12:00 pm.