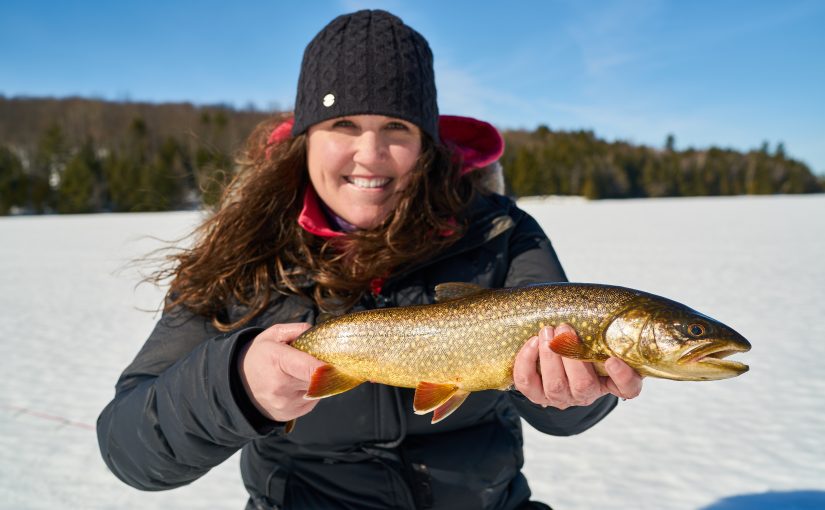 Today’s post comes from year-round multispecies angler and writer Ashley Rae of SheLovesToFish.com, as she recounts her 2017 trip to Silent Lake.

I think any angler will agree that it’s nearly impossible to sleep while experiencing the anticipation of an upcoming fishing trip. This was the case for me and my friend Lori, who joined me on a recent adventure to Silent Lake Provincial Park.

This trip was especially exciting as Lori was chasing her first Lake Trout, and we would be exploring a new body of water. We were also looking forward to staying in a yurt, something neither of us had experienced. We made the early morning three-hour drive from the Ottawa area to the park located just outside of Bancroft. As the sun was starting to light up the sky, we began our trek out onto the ice. I brought along my spud to check the ice thickness while Lori followed behind, towing our gear in a sled.

I had printed a bathymetric map to view the depths and contour lines on the lake. This would help us determine where to drill our holes. The park allows for hand augers only, and just one line is permitted per angler. Lake Trout season is open from January 1 to September 30, and there is a slot size (in 2017). Be sure to refer to the fishing regulations prior to visiting the park, as changes can occur from year to year.

During the warm months, Lake Trout are typically found in the deeper holes where water temperatures are lower. As the water cools, they can be found at various depths typically along contour lines not far from baitfish, who use these areas as a travel route. Lakers, being a cold-water species, become quite active during the winter months, unlike many other species that slow down.

The first half of the day was spent covering water and looking for fish. Although we drilled holes in water ranging from 12 feet all the way down to 70 feet, it was one location in 40 feet of water that was showing the most activity on my MarCum flasher. We had a few fish come racing up to our blade baits and tubes seemingly very interested, but they slunk away after teasing us a bit. We decided to stick it out to see if we could convince any of these fish to bite. Late in the morning, a fish came racing up and smashed my blade bait! After getting this fish up to the hole, it popped off before I was able to catch a glimpse. I’m still haunted as it put up quite a battle on my medium-heavy spinning set-up and a good bend in my rod.

It was a little discouraging but I was happy to see a fish that would commit and had hope that there would be more action to follow.

Shortly after, another fish showed interest and after a bit of coaxing, I was able to land my first Lake Trout of the trip! Woo hoo! We were both thrilled and were glad that we put in the time to find fish and stuck to this location. Lori was in awe of the gorgeous colours on this laker. After a quick photo, the fish was released. I was hopeful that Lori would get into one next.

After the excitement settled, I was hole-hopping in the area when Lori fell silent during our conversation and I knew she was marking a fish. I saw her set the hook and I booked it over to help her land it. After a good battle, she brought it up to the surface and I grabbed it. We were both ecstatic, high fiving, and hollering. Her fish was larger than mine, and the orange on the fins was stunning. I couldn’t have been happier to see her land her first lake trout. She was blown away at the battle these fish put up and how aggressive they can be. We snapped a quick photo before she released her fish. Check-in for the yurt was at 3:00 pm, so we headed off the ice to get unpacked and settled in. We absolutely loved the yurt! It was so spacious, cozy, and quaint yet modern. Equipped with a propane fireplace, lights, electricity, along with a deck, fire pit, drive-up parking space and a BBQ; we both agreed that we would definitely be visiting Silent Lake again. I can’t believe I hadn’t camped out in a yurt sooner. We finished off the evening by cooking a delicious meal of herb and garlic marinated chicken breast and pan-fried vegetables on the BBQ. There’s nothing like a hot meal after a spending a full winter day outdoors.

I know we will be talking about this experience for years to come and cannot wait to plan our next visit.