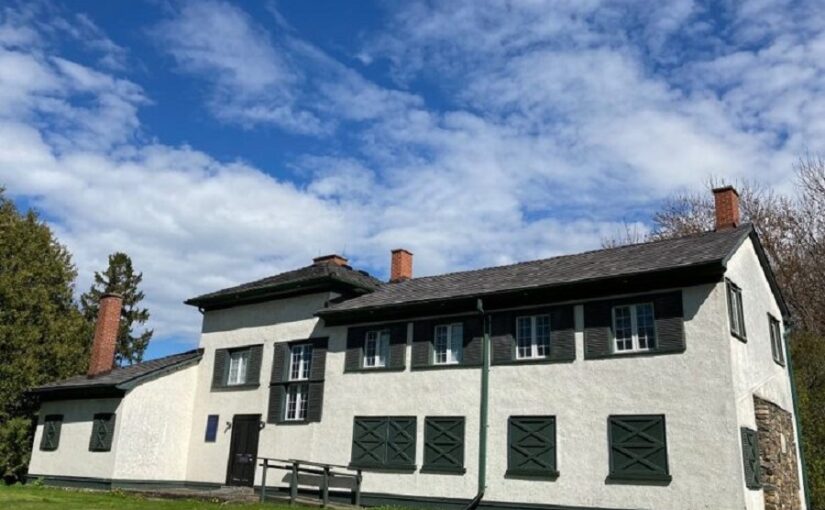 Moving to an unfamiliar area can be a daunting process.

Think of the last time you moved. What family treasures did you take with you? What made the move easy or challenging?

In this blog, we’re going back almost 200 years to the move that gave Sibbald Point Provincial Park its name.

A family of settlers

Sibbald Point was named after the Sibbald family, who were the last owners of the land prior to the formation of the park in 1957.

The Sibbalds owned the property from 1835-1951, and the memory of their time here lives on at Eildon Hall Museum, where a portion of the Sibbald family collection is displayed.

From oil paintings and books to china and silver, the Sibbald collection is full of objects. Each one comes with its own memorable story. But first, who were the Sibbalds?

Susan Mein Sibbald (1783-1866) was the daughter of Dr. Thomas Mein, a Royal Navy surgeon. She grew up in England and summered near Melrose, Scotland at the family’s summer estate, the original Eildon Hall and the eponym for what would later be the family’s North American home.

While in Scotland, Susan met her husband Colonel William Sibbald. They married in 1807 and together had eleven children — nine sons and two daughters.

Beginning with Susan, Eildon Hall at Sibbald Point would go on to be the home of many generations of the Sibbald family.

A journey to Upper Canada

In the 1830s, at the suggestion of Lieutenant Governor of Upper Canada and friend John Colborne, the Sibbalds made the decision to move to North America.

Prior to the move, Susan sent two of her sons to learn how to farm in Orillia.

Word of the sons living in a tavern traveled back to Scotland, which troubled Susan. She was a conservative woman and expected her sons to live in a respectable place.

Susan, worried for their reputation, travelled across the Atlantic to assess their living conditions herself.

The tavern turned out to be a pleasant inn.

Satisfied with their accommodations, Susan took a ferry across Lake Simcoe to explore the area. On the south shore of Lake Simcoe, she happened upon an estate known as Penrains, owned by Major William Kingdom Rains.

The estate was comprised of 500 acres of land and a small log cabin. Susan’s arrival was timely, as Major Rains was looking to sell his property to move and start a settlement on St. Joseph’s Island, near Sault Ste. Marie.

Susan returned to Scotland to share the good news with her husband, but on her return she was greeted with the news of her husband’s passing.

Returning to Lake Simcoe in 1836, she decided to begin a new chapter of her life.

Susan brought with her two ships full of belongings, including objects that are still on display at Eildon Hall today!

While Susan brought the bulk of the belongings with her, including oil paintings and furniture, over time other family members brought objects that are also significant in the Sibbald story. A possession that still sits on the walnut bookcase in the library is the Sibbald’s bracket clock.

Older styles of bracket clocks were mounted on the wall (with a bracket), with a pendulum to keep time. Newer bracket clocks, such as this one, were spring-driven and weren’t mounted.

This clock was made by James Cowan, a famous Scottish clockmaker from the mid-18th century. Having the handle on the top of the clock allowed it to be moved from room to room.

The clock belonged to William Sibbald, the late husband of Susan Sibbald. She brought this clock with her in 1836 to remember her husband, as it was his favourite clock.

Susan navigated the rest of her life as a widow and an independent woman.

The clock allowed her to hold on to her memories as she adapted to her new life in Upper Canada.

Holding on to religious values

In addition to building Eildon Hall on the foundation of Penrains, Susan Sibbald was instrumental in the building of St. George’s Anglican Church, located just outside the present-day park.

Susan was a devoted Anglican, and her religion was a guiding force in her life. Due to her social standing and financial state, she was able to donate land and funds for the establishment of an Anglican church.

In coming to an unfamiliar place, religion allowed the Sibbalds to maintain their values in the developing community.

Susan’s values were shared with the family. Their involvement with St. George’s continued for many decades.

Susan’s sons, Capt. Thomas, Dr. Frank, and Hugh, contributed funds for the church to be rebuilt in the 1870s as a memorial to their mother. It was built in England in the 1860s and was a popular instrument for the time. It was favoured for its small size and the handles on the sides that allowed it to be portable.

This harmonium served as both a central part of church services at the hall, church, and surrounding area. Not to mention entertainment!

Artifacts as a window into the past

Looking at a few artifacts only scratches the surface of the Sibbald story, which spans many generations of travel, military service, culture, and change.

Throughout their time on Lake Simcoe, the Sibbalds kept true to their roots, and values of tradition and refinement.

As we travel through life, we can reflect on what possessions we hold dear and our stories that they tell.

The more stories we share, the richer our lives become as our histories shape the future.