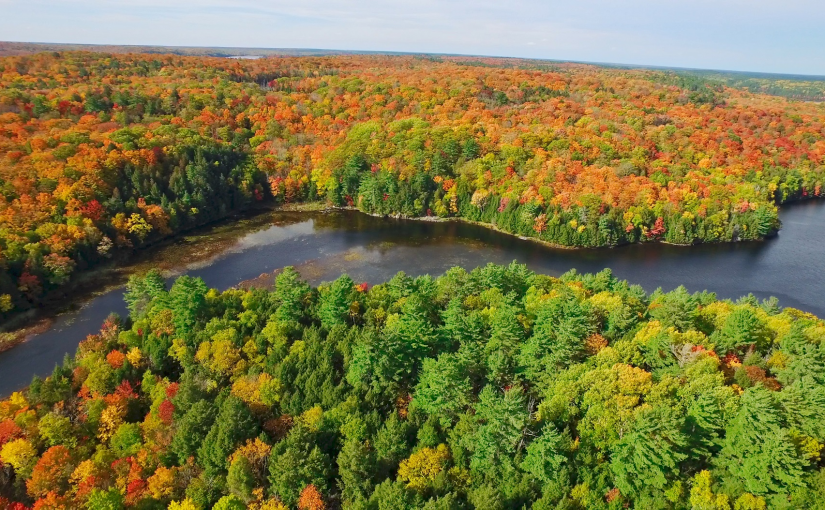 When we hear the words “fall colours,” our minds often jump to Algonquin. Trouble is, Algonquin’s gotten so popular that autumn brings long line-ups, crowded trails, and traffic-snarling “leaf jams.”

So where can we go to see awe-inspiring fall colours, hike to breathtaking lookouts, and avoid the crowds?

You haven’t heard of it? It’s a gem. And it’s a multi-coloured gem in the fall. The forest there is very similar to Algonquin. Red and Sugar Maples dominate, with their deep reds and brilliant gold and orange hues. Towering, gnarled Yellow Birch add to the warmth of the canopy, while Red Oak add a deep reddish burgundy to the mix. Pine and hemlock add green to the forest palette.

A huge forest fire in the early 1900’s put an end to the early logging industry in the area, giving the park a very old and diverse forest.

This colourful fall forest is draped over rugged hills, contrasting with the brilliant blue waters of Restoule and Stormy Lakes.

Experiencing the autumn landscape at Restoule can be as a simple as following your feet. The park contains several trails that will immerse you in all the goodness of a fall forest. Did you know trees give off beneficial bio-chemicals into the air that actually make us feel better?

River Trail follows a section of the Restoule River that flows between Restoule Lake and Stormy Lake. Red, orange and gold reflects in the river’s rapids viewed from this 2 km trail.

This trail loops around Rangers Point for a kilometre, with scenic views across Stormy Lake to “the Bluff,” a 100-m-high cliff that dominates the lake. Fall foliage rings the lake and highlights the towering cliffs in the distance. The trail is double track with some steeper climbs, making it best for walking and biking. The inner loop is a new single-track trail designed for mountain biking. With smooth winding corners, moderate changes in elevation and flowing dips, humps and bumps, the trail is great for all riding abilities. The outer double track loop is an easier option with a wide trail surface and fun rolling hills. The name is a bit misleading; this trail does peak at a standing fire tower — one of the few remaining in Ontario — but there’s so much more to see!

We say that the 7 km trail should take you about two hours (moderate with some steep, rocky terrain), but there’s plenty to explore along the way so you can easily spend a half-day hiking, bird-watching, photographing, picnicking.

This trail also boasts one of the best lookouts in Ontario Parks.

The trail enters a forest of Red Pine shortly after the trailhead; these tall trees in straight rows fill what were once a farmer’s fields. The farm, settled in 1881, was purchased to create Restoule Provincial Park. The trail winds through the forest, crossing boardwalks, wetlands and streams.

It then rises abruptly to a rocky Red Oak forest. This forest occupies the dry broken edge of a high ridge known as “the Bluff.” This vantage point provides hikers with sweeping views of Stormy Lake and the Restoule River, which flows west along a fault line towards the French River. Bald Eagles have been seen using the updrafts at the cliff edge.

In fall, the view becomes still more breath-taking, as the forest takes on its autumn hues.

Stormy Lake is another great spot for leaf-peeping. While not a huge lake, it’s wide enough to give you a pretty big view, and has lots of shoreline to explore (plus it connects directly to neighbouring Clear Lake).

Paddling right up to the base of the Bluff and its towering cliffs gives you a different perspective from the panoramic views from the top. A short portage takes you into Hazel Lake, a small pretty little lake on the north side of Stormy.

For easy backcountry camping, Stormy and Clear Lakes have eight backcountry sites accessible by water (and no portaging!).

For a longer backcountry trip, Stormy flows out into the Restoule River and then into the French River. This creates a four to six day canoe trip that loops back into Clear and Stormy Lakes from Lake Nipissing to the north. Explore Magazine called it one of Ontario’s 25 incredible routes.

As with all of northern Ontario, the Indigenous people who live in this region have been paddling these routes for thousands of years. The French River section of the trip was the main fur trade route for the better part of three centuries. The French River was named Canada’s first “Canadian Heritage River” because of the outstanding natural, cultural and recreational values. Restoule’s campground is at the end of the road — literally. Highway 534 leaves four-lane Highway 11 at Powassan, passes through the hamlet of Restoule, and ends at the park.

Restoule is far from major highways, railways and big city lights. It’s quiet with dark night skies that are absolutely filled with stars. A star party around the campfire, after a day of hiking through the forest, seems like a perfect fall day. The park has a full complement of camping facilities:

Ready to bathe in autumnal splendour? Book a fall trip to Restoule!