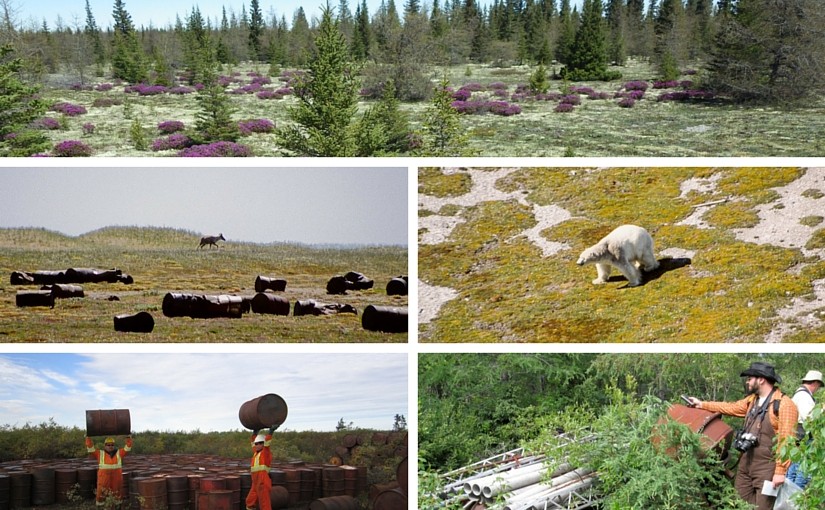 For Day 4 of Earth Week 2016, we want to share an amazing success story:

Few Ontarians will ever visit the 2.3 million hectares of protected land along Ontario’s only salt water coast. The park is home to the magnificent polar bear, as well as caribou, seals and the beluga whale.

Between 2011 and 2016, Polar Bear Provincial Park underwent the largest Environmental Remediation Project ever to be completed inside a protected area!

A scar on the landscape

Between the late 1950s and mid-1960s, several military sites were constructed within Polar Bear Provincial Park. These sites were occupied by military personnel and performed defensive radar detection.

Until they were abandoned.

In addition to being an eyesore on Polar Bear’s pristine wilderness, the Mid Canada Line sites were sources of chemical and physical hazards. Polar Bear Provincial Park protects landscapes of provincial, national, and international importance, including the world’s third-largest wetland. The park was named for its function as habitat for the southern-most population of polar bears in the world. In addition to the impressive bears, caribou and saltwater sea life, the park also plays host to millions of migratory birds, including herons, cranes, shorebirds, ducks, geese, and swans. Some breed within the park, while others use the park as a migration stop over on their way to the central Arctic.

Polar Bear Provincial Park is also occupied by adjacent communities. The main base camp — Site 415 — is still regularly used for sustenance by nearby First Nations communities, including Attawapiskat, Peawanuk and Fort Severn. Centuries-old traditions of hunting, gathering and traditional knowledge transfer still continues there today. Collaboration with these communities was crucial in developing and completing the project. Staff from the Ministry of Natural Resources and Forestry, with support from the federal Department of National Defense Canada, led this massive remediation project.

A workforce hired from local communities put in 27,000 hours. Over 1,830 hours of classroom and on-the-job training was provided to community members. Now, instead of ruins and debris strewn across the landscape, the site is more natural and has — as much as possible — been returned to something similar to what it would have originally looked like. On Site 415, the Mid Canada Line team cleaned up:

As a member of the Mid Canada Line Project Team, we are very proud of the end result: Polar Bear Provincial Park is a cleaner, safer park.