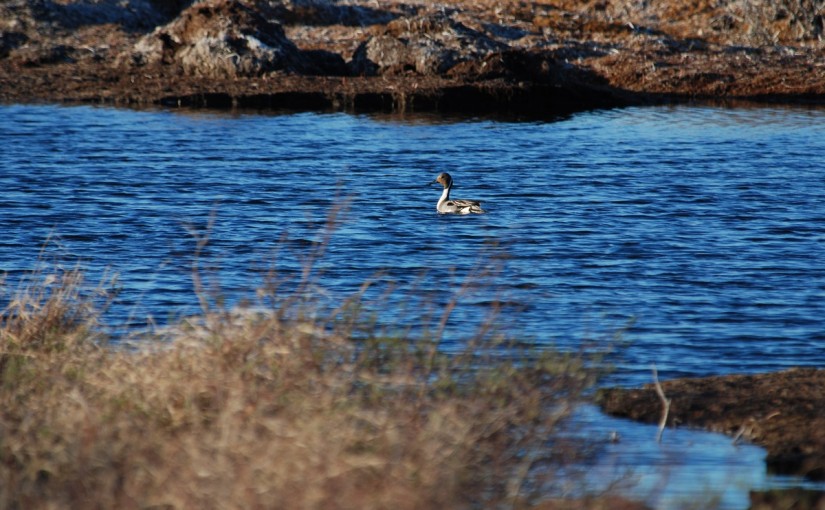 This installment of our 2017 blog series IBAs in provincial parks — brought to you by Ontario IBA Coordinator Amanda Bichel of Bird Studies Canada — is very “cool.”

Welcome to our year-long blog series! For our inaugural spotlight, we are staying in the winter spirit and focusing on Ontario’s far north. That’s right: our worlds collide up there in a big way.

Polar Bear Provincial Park is overlapped by five, count them, FIVE Important Bird & Biodiversity Areas, and the park protects 2.3 million hectares!  The IBAs follow the coast and extend into the bay while the park encompasses mainly terrestrial habitat. This area, situated on the southwest corner of Hudson Bay, is mainly low-lying tundra habitat. The landscape is carpeted with peat bogs in the summer, and snow and ice in the winter.

Polar Bear Provincial Park is a habitat like no other with far-reaching beach ridges, thousands of small ponds and lakes, coastal marshes, winding river channels, and a cushion of tundra plants (grasses, mosses, and the odd spruce tree). The park protects the third largest wetland in the world! These wetlands provide flood control, biodiversity preservation and climate regulation, as well as fundamental cultural value for residents.

Even this cold and seemingly inhospitable habitat can support MILLIONS of birds during migration and breeding periods.

Which species do these IBAs protect? Remember: most IBAs in Canada are designated for congregating birds (more than 1% of their North American or global population).

For example, Cape Henrietta May supports a snow goose colony of at least 400,000 birds, over 5% of their global population.

Likewise, the pectoral sandpiper has had 5,900 individuals in one IBA alone, almost 10% of their global population.

In 2016, Ontario Parks completed a major restoration effort (the largest ecological restoration project in Ontario’s history!). Now, instead of ruins and debris strewn across the landscape, the site is more natural and has — as much as possible — been returned to something similar to what it would have originally looked like. Thanks for the park/IBA makeover!

Check out the before-and-after impact:

That said, this beautiful northern park is likely not one to add to your travel list. Remote, and accessible only by air, Ontario’s largest and most northerly park features unspoiled low-lying tundra. There are no visitors’ facilities.

But this spring, when you spot your favourite shorebird and geese species, remember that Polar Bear Provincial Park and its IBAs may play a crucial role in their journey.

We can all take pride in this vast, sub-arctic wilderness and the biodiversity it safeguards.