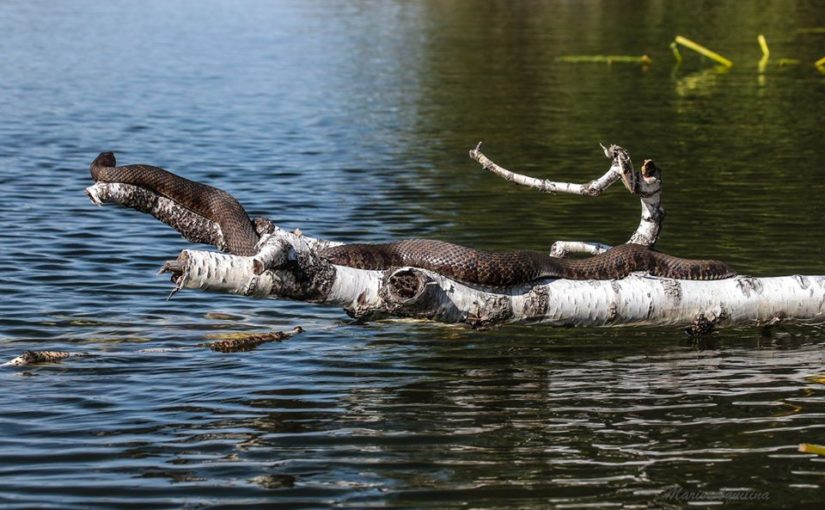 If you explore Pinery’s Old Ausable Channel, you might see a variety of fish swimming, water lilies floating in the sun, or even a beaver ducking into its lodge.

However, we have recently received reports of a large reptilian creature swimming just below the surface.

A photo has made its way around social media showing a very large snake on a log along the channel. This photo has caused many a question and concern about what may be lurking beneath the water’s surface. This “monster” has been identified as a Northern Watersnake, a common species in Ontario.

There are a lot of questions surrounding this species of snake, and many visitors are concerned about spending time on and near the water because of it.

Let’s go through some myths and facts about this species so you can get back to enjoying the Old Ausable Channel you love.

That’s not a watersnake; someone let their pet anaconda loose in the Old Ausable Channel!

This is a photo of a Northern Watersnake.

It can be identified by its brown or reddish-brown banding horizontally down its back and sides. Although its size may be off-putting, it’s abnormal for these snakes to grow this large, but not unheard of.

Pinery has a healthy population of Northern Watersnakes, most adults vary from 60-110 cm in length, but some can get much larger.

The Northern Watersnake is the largest snake we have in Ontario.

The Gray Ratsnake is the largest species of snake in Ontario, stretching up to 2.5 metres in length.

This species is not found in Pinery. Their range stretches along the eastern edge of Ontario, and Gray Ratsnakes are listed as a species at risk.

That photo is fake. I’ve been to Pinery many times, and have never seen anything like it.

Although this photo does not have a scale to demonstrate how large the snake is, park staff have been able to confirm sightings of a Northern Watersnake of this size in the Old Ausable Channel. The size of this snake is an indicator for healthy ecosystem. It tells us there is a healthy food source of fish and amphibians for this snake in the channel.

Northern Watersnakes are not aggressive, and will only bite if provoked or handled.

They are known to be curious animals, and may approach swimmers to investigate the source of ripples in the water. However, once they are close enough to smell the source of the disturbance and rule out the possibility of food, they will retreat and leave the swimmer alone.

Northern Watersnakes are non-venomous and pose no threat to humans.

Northern Watersnakes are completely harmless to humans. They are non-venomous, and will only bite if provoked.

Northern Watersnakes are fascinating and misunderstood creatures who are specially adapted for life in and near the water.

They can be found up to three metres below the surface of the water when hunting for fish, amphibians, and other prey, although they are usually found swimming along the surface. These watersnakes can be found up to a few kilometres from the shoreline. When they are near shore, they are great climbers, which allows them to find basking spots on low-hanging tree branches over or near the edge of the water.

Not so scary, are they?

Although this large reptile may have you feeling a little uneasy about your next visit to Pinery, you have nothing to worry about.

These snakes are completely harmless.

As you paddle along the Old Ausable Channel this season, keep a keen eye for Northern Watersnakes basking on downed branches in sunshine. They’re amazing creatures and a very exciting sight!