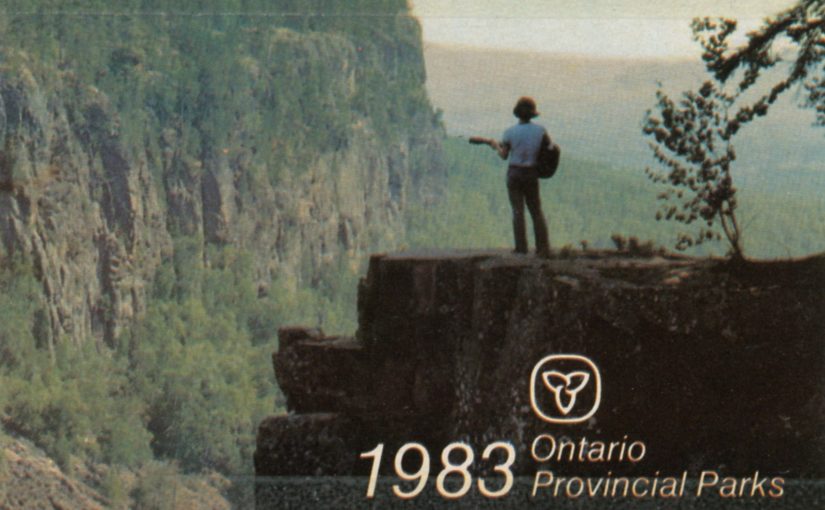 Gearing up to celebrate our 125th anniversary has us digging through archives in search of vintage photos and documents. Over the course of the year, we’ll be sharing our discoveries in our OP125 blog series.

This month, we’re taking a look back on a collection of Ontario Parks vehicle permits dating back to 1957. Purchased and displayed on the front dash of a vehicle, these permits would give people unlimited daily vehicle entry to all Ontario provincial parks. The oldest vehicle permit currently in the collection is from 1957. The permit features the Ontario coat-of-arms and a classic depiction of a camping scene. The Department of Lands & Forests oversaw provincial parks until they re-organized in 1972 to become the Ministry of Natural Resources. In 1963, the beautiful Monarch Butterfly was highlighted on the vehicle permit. In 2008, the Monarch was listed as a species of special concern on the Species at Risk in Ontario List. For 1967, of course Canada’s national animal, the Beaver, is illustrated. In 1970, Polar Bear Provincial Park was created, and this achievement was featured on the vehicle permit for that year. Polar Bear is Ontario’s most northerly provincial park, as well as the largest at 24,000 sq. km. The 1973 vehicle permit is the only circular designed permit in the collection. 1974 is when a photograph was first used on a permit versus the stylistic artwork. Can you see anything wrong with the guys in this boat from the 1976 permit?

You guessed it: they are missing personal flotation devices (PFDs)! This photo was taken at Ouimet Canyon Provincial Park, a day-use park located just over an hour from Thunder Bay. Today there is a trail and boardwalk that connects to lookout platforms that provide spectacular views of the canyon. Did you know, Lake Superior was one of Ontario’s first eight provincial parks? It was established in 1944.

1993 marked the 100th anniversary of Ontario’s provincial parks. The anniversary was commemorated on this permit by the centennial logo and a vintage photograph. A group of hikers at Silent Lake Provincial Park is featured on this permit from the early ’90s. Have you hiked these trails? In 1996, Ontario Parks adopted a new entrepreneurial operating model that was symbolized by a new name “Ontario Parks” and a new logo.

Beginning in 1998, the logo is featured on vehicle permits. Both permits feature classic ’90s camping style! Our partners over the years

Over the years, a number of corporate partners have supported Ontario Parks and have been featured on vehicle permits.

A huge thanks goes out to all of our partners! Featuring the iconic moose, the 2014 permit is the first one designed to hang off of a car rear-view mirror. Have you purchased your 2018 vehicle permit pass?

Make 2018 the year to check parks off your bucket list! Special events, programs, and campaigns will be happening across the province to celebrate Ontario Parks’ 125th Anniversary.

Visit OntarioParks.com/op125 for more information on events and our history.

You can order a seasonal or annual park pass by clicking here to visit the Parks Store.

Do you have any vintage Ontario Parks documents or photos in your personal archives? Share it with us @OntarioParks #OP125.