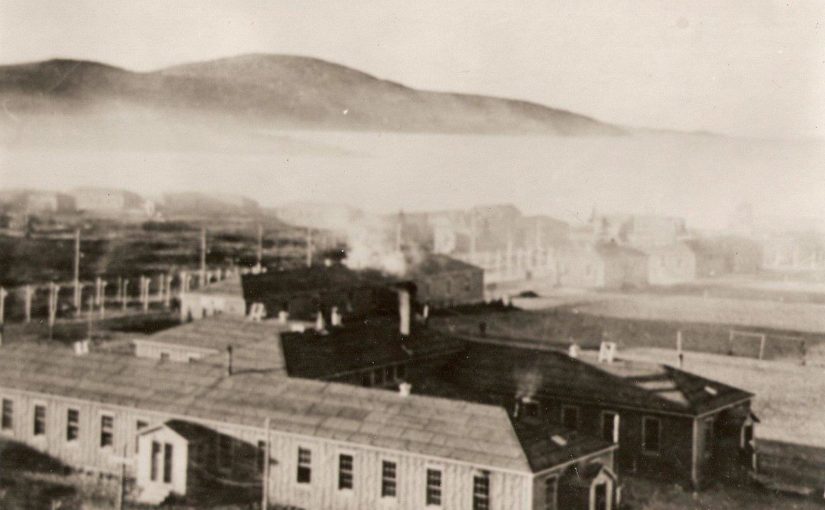 Before Neys became a provincial park, it was known as Neys Camp 100. Instead of happy campers on vacation, the park held German prisoners of war during World War II.

After operating as a prisoner of war camp from 1941-1946, the buildings were dismantled in 1953. Since then, artifacts have showed up from discoveries in the park and from generous donations.

Put yourself in their shoes

What better way to understand a prisoner than to step into their shoes? These boots are believed to have belonged to a German prisoner during his internment at Neys. Imagine being a prisoner. It must have been very frustrating and intimidating walking off a 64-hour train ride from Halifax to a cold, foreign land, not knowing where you are.

To reduce the chance of possible escape attempts, the guards withheld their location by covering destination signs along the train tracks.

As you can imagine, a prisoner-of-war camp requires a barricade in order to keep the prisoners confined. Barbed wire was used as a deterrent for escaping. There were three rows of barbed wire fences, each three metres high and three metres apart. The 500 or so prisoners resided inside the fence, while on the other side were the 100 members of the Veterans Guard of Canada along the north shore of Lake Superior.

The Veterans Guard of Canada was made up of veterans from the First World War, many being too old or injured to enlist in the Second World War, but were still able to help at the POW Camp.

Inside the fenced area, you could find H-shaped barracks, a recreation hall, a mess hall, a hospital, and a sports field. If you walk around the campground today, remnants from the camp are still visible. This cigarette case may have belonged to either a prisoner or guard. If you look closely, you can see the initials, “W.B.” etched in a heart on the bottom corner. Was it a gift from a loved one? Who is W.B and what was their story? This artifact reminds us that both the prisoners and guards were isolated from their families, friends, and loved ones while serving their countries.

Daily life as a prisoner of war

The day-to-day lives of prisoners can be imagined from oral histories and research papers. Most prisoners worked for the Pigeon River Timber Company in logging camps along the Little Pic River.

Since Canadian men went overseas to serve on the frontlines during the war, prisoners of war assisted in filling the labour shortages that timber companies faced. They used tools like the pike pole to help lessen the pain of bundling up cords of lumber.

Still, prisoners had plenty of free time on their hands. This allowed them to participate in organized sports, an orchestra, logging work, and art while at the POW camp. Prisoners painted postcards, canvases, made sculptures, wood carvings, and more.

This ship carving was crafted by a prisoner at Neys. Since many of Neys’ prisoners were officers of the German Air Force or Navy, ships were a common subject for their work. This piece is called the “Karlsruhe,” and was most likely the ship the artistic prisoner had served on before being captured.

Notice the tiny details, including a full artillery.

Ladles are an important tool in the kitchen. This one was found in the forest ruins of the Neys 100 compound.  It’s said that the prisoners were given fresh eggs upon arrival and provided with coffee, tea, pickled meat, potatoes, porridge, soup, bread, cabbage, and even beer. The prisoners had German cooks, were fed very well, and rarely experienced food shortages. Camp food may not have been too far off from what we eat today when camping at Neys!

Food and other supplies were delivered by train, which can still be heard and seen running along the northern boundary of the park. Today, the mess hall (where the prisoners dined) is the largest remaining remnant. Parts of the foundation can be seen along the main park road between Area 1 and the Comfort Station.

Remember, if you come across an artifact or remnant, please leave it in its place, take a photo, and report its location to park staff.

After the prisoners ate, we hope that they cleaned their teeth too. This toothbrush head — found in the park — has a plastic body with horsehair bristles that may have belonged to a resident of the camp. Even as prisoners and in the heat of the Second World War, hygiene was critical to maintain good health. The prisoners also had a small wash station in the middle section of their barracks.

From artists to escape artists

The German prisoners had many opportunities and hobbies, and generally what seemed like a good life at the camp. Ultimately, however, it was their job to try to escape.

These handmade weapons — a hammer body with a rusty nail and a gun shaped body with a serrated blade — were recently donated to Neys Provincial Park by a previous guard’s family who confiscated them from prisoners during his watch at Neys Camp 100.

The prisoners at Neys Camp 100 were eventually sent back to Germany in March of 1946. As a result of how well prisoners were treated, many immigrated back to Canada to call this country their home. Neys Provincial Park was named a National Historic Event in 2012, recognizing the fair and humane treatment of POWs across Canada during World War II.