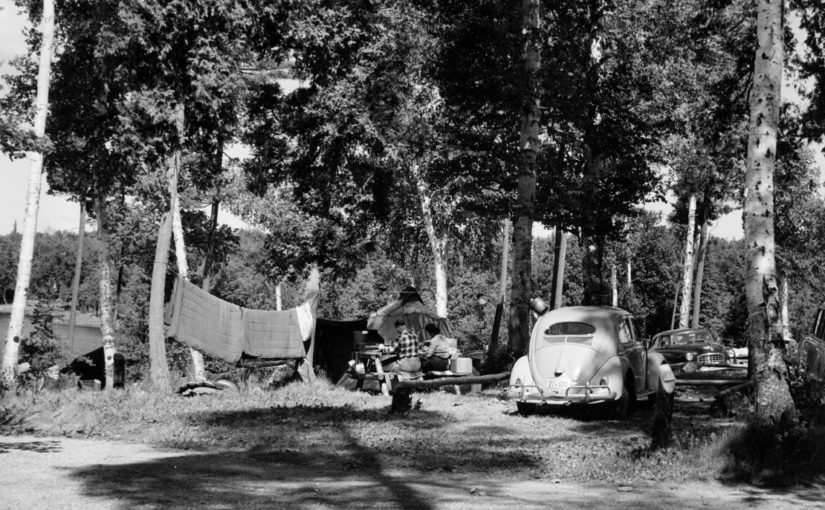 So who’s this guy “Marten” anyway?

Often called the southern gateway to Temagami, Marten River Provincial Park straddles the Marten River, which is part of an ancient network of waterways that stitch the landscape together.

The marten is a member of the weasel family, and a handsome one too. Pine Martens are often found in old, tall pine forests, looking for food. The Pine Marten may be small (usually no more than a kilogram in weight and 40-50 cm in length), but they are keen predators.

While they will eat anything from frogs to bird’s eggs, some fruit, and even bird seed, they prefer rodents such as mice, voles and even Snowshoe Hares! The Red Squirrel is a Pine Marten favourite.

The Red Squirrel is a northern squirrel, inhabiting the northern Appalachian Mountains, north into the Great Lakes region, and even further north into the vast boreal forest.

The Red Squirrel is an omnivore – eating both plants and animals. Large insects are a staple, and they aren’t above snatching an egg or a baby bird from its nest. Seeds though, are a big part of their diet, especially pine seeds.

They spend much time high in the tops of white and Red Pine trees, cutting the pine cones from branches and dropping them to the ground.

They collect the dropped cones and bury them in middens. A midden is a buried hiding place (like under a large root mass) that creatures visit through the winter to eat the stored food.

Although the Pine Marten is quite an agile hunter, and can leap from pine to pine, they most often catch squirrels visiting their middens.

Pine Martens are quite hardy (like the Red Squirrel), and inhabit conifer forests north into the boreal forest. They have luxurious, warm fur, which was sought after by Indigenous people and European fur traders. The Marten River that flows through the park was named by the Anishinaabe people for the abundant Pine Marten that inhabited the area.

Pine Marten habitat was common across Ontario 125 years ago when another pinery (an old name for a large pine forest managed for timber) became Algonquin Provincial Park.

Algonquin was established as a park in 1893, and the province began to manage the pine forests, lakes and watersheds, and habitat for animals. Just a few years later, the province of Ontario tried a different designation for the Temagami and Mississagi Forests, north and west of Algonquin.

In 1901, the province created the Temagami Forest Reserve (also known as the Temagami Provincial Forest). This designation protected the forest, with harvesting only taking place to salvage wood from forest fires. The forest was to be a reserve for the future, and it was for many decades.

That early protection meant that by the 1980s and 1990s, parks in the area still had large stands of ancient pine forest.

Just south of the Temagami Forest Reserve, the Marten River area was also covered by a large pinery. This became a seasonal home in the early 1900s to lumberjacks, living in temporary villages of log cabins called winter camps.

With few roads in the north country in those days, lumberjacks used the snow and ice to help move big logs around, and the meltwaters of the spring thaw to drive the logs down to the saw mills.

Marten River Provincial Park began as a small campground on a brand new stretch of gravel road called the Ferguson Highway in 1925. The highway was built to connect southern Ontario with “New Ontario,” which is how northern Ontario was known then.

The highway was named after the Premier of Ontario, George Howard Ferguson, who was a big promoter of the north.

Before the new road, the only way to reach the communities of northeastern Ontario was by rail. Once the highway was established, agricultural communities of the Little Claybelt, (such as New Liskeard) boomed.

The bustling town of Cobalt was the centre of the richest silver mining district in the world at the time. Now, the Cobalt Mining Museum has one of the biggest pieces of silver ore you’ll ever see!

A place for weary travellers

The Department of Public Highways Ontario and the Department of Lands and Forests were at the time concerned that travellers on the Ferguson Highway might burn down the pine forests that were so important to the northern economy.

To ensure people had safe access to campfires (for cooking and warmth), the Department of Public Highways Ontario established a series of picnic sites and campsites along the new road.

Martin River Camp Site, as it was called then, was established as a car campground for travellers. There were no hotels, motels or lodges along this brand new gravel road.

Cars of the 1920s didn’t travel too fast either, so picnic stops and campsites were not very far apart. Marten River was the first of three public campgrounds between North Bay and Latchford. “Lunching places” were located every five kilometres along the whole length of the highway, which eventually stretched over 400 km to Cochrane.

The original campground was on the west side of the park, at the end of the park’s current Chicot Campground. To reduce the number of bridges that were needed, the road avoided the two crossings of the Marten River that the Trans-Canada makes today. The road swung west and crossed where the current Marten River Lodge is today. This lodge was originally the headquarters for the Ferguson Highway road building staff.

To travel the Ferguson Highway, you needed a travel permit.  Heavy on fire prevention messaging, it stated how many days you planned on travelling through the region, and where you were going.  It was your ticket in case the authorities checked up on you.

On the reverse side, a map showed large lakes, the Ferguson Highway with mileage, public campsites, and towns. A major forest fire in 1916, the Matheson Fire, had killed 224 people (still the deadliest in Canadian history), and spurred Ontario to develop the Forest Fire Prevention Act. This was the beginning of a modern forest fire fighting service. Travel permits like this were meant to limit human caused forest fires.

While people had already been camping here for 35 years, Marten River Provincial Park was officially established in 1960 as a “recreational class” park as part of Ontario’s provincial park system.

Highway 11 (a.k.a. Yonge Street) replaced the Ferguson Highway and became the main travel route in the 1940s, at which point a new park entrance and campground was established on the east side.

In the early 1970s, park staff began to plan a logging museum that would replicate the type of seasonal lumber camp that lumberjacks would live in through the winter months as they cut the huge pines.

As a result, Marten River is now home to the Winter Camp, a re-creation of those temporary logging camps common in Temagami and the north during the horse-logging era of the late 1800s and early 1900s.

Every year, on the third weekend in July, the park holds an event called  Lumberjack Days, a celebration of those early days, with music, traditional food, and events that test visiting loggers’ skills.

The park also holds a Logging Day with blacksmithing demonstrations, story-telling and guided tours of the logging museum and Winter Camp.

The campgrounds were redeveloped over time, and a comfort station with flush toilets, hot showers and laundry facilities was added in the 90s, as well as electrical sites.

There are two hiking trails within the park, and 20 minutes north, in the town of Temagami, you’ll find the Caribou Mountain Conservation Reserve trails as well as a reconstructed fire tower you can climb.

The park has two camper beaches and one large day use beach. There are several boat/canoe launch areas. Located on the Marten River, the park is connected to a network of waterways that provide great opportunities for paddling, boating and fishing. Nearby Temagami River Provincial Park is an excellent whitewater canoe and kayak playground, perfect for either day tripping or a backcountry adventure. Marten River lies off the Trans-Canada Highway (Hwy 11), 40 minutes north of North Bay.

Consider staying at Marten River Provincial Park in Temagami for your next trek up to northern Ontario!