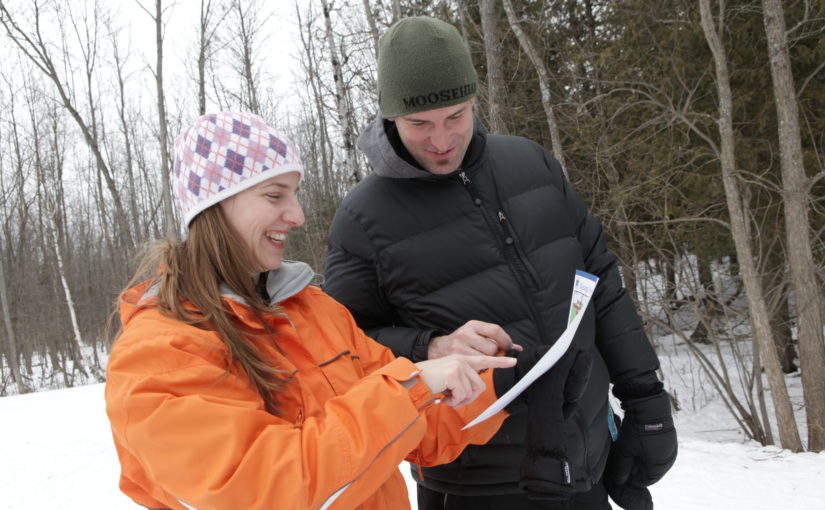 Today is GIS Day, and to celebrate we thought we would look back and see how far GIS has come over the years. From mapping, to tracking, to data collection, GIS staff do it all! Mapping was a much different process in 1893 before airplanes, GPS, and computers.

This map was created in 1893, exactly 128 years ago when Algonquin Provincial Park (then known as Algonquin National Park) was created as the first provincial park in Ontario. It would have been drawn by hand, using information from ground surveys and local knowledge.

Today, it is clear that our ability to manage spatial data and map out important features has come a long way, even if the basic principles have stayed the same.

Maps have always been an important part of Ontario Parks, from trail maps to campground maps to maps used in park management plans. The methods we use to create maps and manage spatial information have come a long way since Ontario Parks was created in 1893. Most notably, the introduction of computers into the process, which has allowed us to manage and store vast quantities of data in the form of a GIS.

“GIS” stands for “geographic information system,” and is used to refer to the spatial data, the equipment used to capture and store it, as well as the methods used to process and analyze that data.

Ontario’s provincial parks come in all shapes and sizes. It’s up to our GIS technicians to know where everything is within those vast areas. With modern technology, making maps like this is much simpler than it used to be. What may have taken hours or days in the past may now take only minutes!

In Ontario Parks, where we manage over 80,000 km2 of land, it’s important to have a system in place where we can keep track of where everything is!

Tools of the trade

The airplane is a significant advance in technology that brought GIS to what is today. Following World War I, the increasingly widespread use of airplanes allowed private companies and governments to capture images of large land areas with airplane-mounted cameras.

To this day, aerial imagery is an extremely valuable tool that GIS technicians can use to verify existing mapped features, or map out new features based on what they see in the imagery. This aerial image was taken from an aircraft over Clydegale Lake in Algonquin Provincial Park. Even a quick look can show how this would help map out lake, stream, and wetland areas to aid in making management decisions in the future. This was taken in 1978; new imagery is taken every few years to keep our information as updated as possible.

Aerial imagery really took off (pun intended) in the 1930s, but even then the maps that were created from these images would all be hard-copy maps.

Some of the more advanced maps would utilize sieve-mapping, a process of mapping out different features on multiple sheets of transparent paper and overlaying them on top of each other to identify patterns.

This process was great for finding overlapping areas, but was often slow, and made it very difficult to measure exact areas. In the 1960s, our modern system finally began to emerge along with the introduction of computers.

The very first modern GIS was the Canadian Geographic Information System (or CGIS), created by the geographer Roger Tomlinson. Having accurate spatial data was, and still is, a priority for Canada to help us manage and maintain our vast natural areas.

One of the most important things we do here at Ontario Parks is ensure that we’re maintaining ecological integrity in our parks. A big part of that is tracking our wildlife populations to ensure that sensitive species are being properly protected. Following the invention of GPS (global positioning system) in the 1970s, which became publicly available in the ’90s, we were able to use these satellite systems to pinpoint locations on the earth.

This was especially useful in wildlife monitoring, as we could use GPS transmitters to both quickly and easily identify locations where wildlife were observed.

We could also attach GPS transmitters to animals to find out where they go when not being observed, giving us insight into their behaviour.

Being able to create detailed maps of where animals are spotted allows us to map out areas that these creatures use as habitat. This helps us enforce protective legislation (such as the Endangered Species Act) to preserve these species and maintain the integrity of the ecosystem.

Tracking collars transmit their GPS locations to a receiver, allowing biologists to track the movements of wildlife without needing to directly observe them, granting greater insight into wildlife habitat and behaviour.

Provincial parks in Ontario range greatly in size (Polar Bear Provincial Park is more than twice the size of Jamaica!), and represent a wide range of diverse values and interests.

In order to ensure that all of the goals of the park are being met, each park has its own Park Management Plan.

Maps are a crucial park of these plans, detailing which parts of the park designate which types of activities. A GIS technician can make sure that all important values, such as endangered species habitat or sensitive wetlands, fall within the right types of zones. This helps park planners, biologists, and superintendents make well informed decisions about how to manage the park.

This is a map from Algonquin Provincial Park’s plan amendment in 2013, highlighting new zoning areas. Delineating between zones helps Ontario Parks to decide how to best manage areas. In addition to naturally-occurring features, Ontario Parks can use GIS to help protect cultural heritage features as well.

Information such as locations significant to First Nations peoples or historical logging camps can be managed in a GIS to ensure they are preserved and respected.

Of course, as a visitor to Ontario Parks, you’re likely most familiar with our recreational features.

This includes trails, campgrounds, and backcountry campsites. Having a detailed and accurate database of our recreational facilities allows us to create useful maps for our visitors.

This map of campsites at Arrowhead Provincial Park give campers valuable information on how to find their campsite and what amenities are nearby, helping to improve the quality of their stay. Spatial data can also be used to create maps and other information products about trails, helping our visitors plan out their expeditions.

This is an elevation profile for the Hardwood Lookout Trail in Algonquin Provincial Park. Knowing how steep some of the segments of the trail are can give you an idea of the difficulty, as well as help you identify the best spots for lookouts! The numbered locations are the trail markers, which help to give visitors an idea of where they are on the map.

GIS and the future

It can be difficult to know exactly where new technologies will take us, but things are advancing quickly.

You can certainly expect GIS to play a more involved role in informing our decision-making through predictive analytics, which is the process of using previous data to predict future outcomes.

New mapping services for visitors to provide more up-to-date information on trail conditions, for example, may also be on the horizon.

On this GIS day, take a few minutes to look over your neighbourhood, and consider the layers upon layers of data that are out there, all stored in a Geographic Information System and used to improve our lives in so many ways.