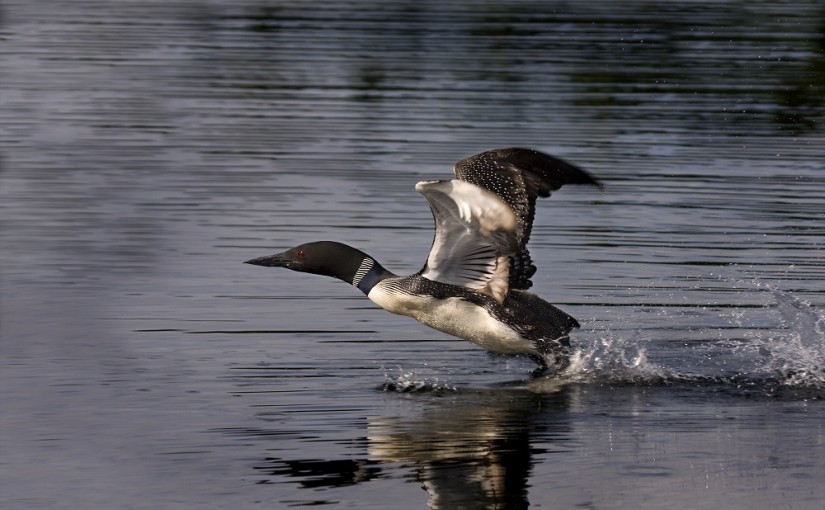 Anyone who’s heard a loon call will tell you it’s one of nature’s most hypnotic, mysterious and beautiful sounds.

Its haunting echo can reverberate across a large lake. Like morning chimes or an evening serenade, a loon’s call gently wakes us up in the morning, and tucks us in at night. One reason the loon remains one of the most iconic Canadian images? The loonie.

This bird is imprinted on over 800 million loonies. The loon has touched virtually any Canadian who has held change in their pocket.

Canada is ideal for loons with its tens of thousands of lakes and inlets, offering perfect breeding grounds to raise baby loons.

Loons strike a dramatic pose with their black and white checkered back, jet black head, and piercing red eyes. Loons are understandably shy of humans, and prefer open water given their strong swimming skills. The best nest sites are on the shores of islands and bays with enough vegetation to hide in. There, their eggs are safe from such predators as raccoons, coyotes, and foxes.

Loons are impressive in size. With a wing span that can expand to one metre, loons weigh anywhere from 2.5 to 6 kg.

While they’re generally peaceful, loons aren’t afraid to show aggression if they feel threatened. If they do, you’ll hear the loon’s tremolo call or “laugh,” which is a frenzied sound that communicates alarm or a territory claim.

In April and early May, adult loons fly to their breeding grounds from the east and west coasts of North America to establish their territory and search for a mate.

The yodel, a long rising call that can last up to six seconds, lets other loons know where they’re setting up their summer residence. To secure their territory, males will fight a competing male loon if necessary. When loons fight they extend their wings and charge across the water to chase away opponents. If that’s not enough, they’ll use their razor-sharp beaks.

Once his territory is established, the male will build a nest for his mate and anticipated chicks. With a mix of mud, grass, moss, pine needles and clumps of mud and vegetation, nests are typically built in small nooks in lake inlets. These offer privacy with close proximity to water. Occasionally, loons will build large nests on open water to better protect against predators. After the family home is established, they’ll court a female. The honeymoon doesn’t last long and the two loons get down to the business of starting a family right away. The gestation period for a female loon is a mere four weeks.

They typically lay one to two eggs. The male and female will co-parent the chicks for around three months, and then leave the young adult loons to find their place in the world. In fall, loons fly to the continental coasts to find open water. Loons hunt fish by sight, propelling themselves underwater with their feet and executing incredible acrobatic maneuvers to catch their prey.

Although loons spend as much time ocean-side as in Canada, somehow we imagine they must feel most at home on Canadian lakes.