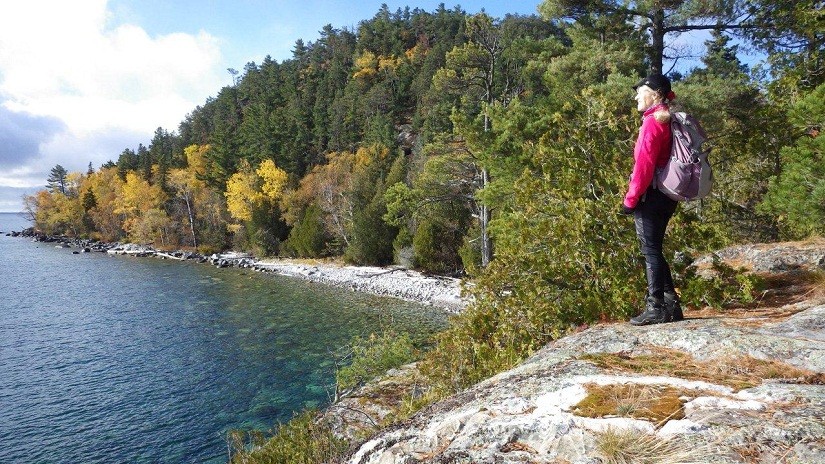 Slippery, steep and rugged sections ahead. . .

If you like wild places, rugged hikes, varied terrain, dark night skies, an endless horizon, fewer biting insects and spectacular rocks, this is the trail for you.

The spectacular route follows the edge of the world’s largest freshwater lake (in surface area) and anyone who has hiked the trail will attest to its “very demanding” rating. It is also a very diverse trail that appeals to people on many levels. The Coastal Trail trail will “rock” your world Not a rock person? You just might become one after spending time on this trail, like I did some 30 years ago. The park’s geology and geomorphology is complex and dramatic, and it’s exposed for all to see along the coast – cliffs, volcanic flows, intrusions, banded rock, chasms, perched boulders, cobbles, and sandy beaches. Each section has its own unique features. The 65 km linear Coastal Trail extends from Agawa Bay, at the south end of the park to Chalfant Cove, at the midpoint of the park coastline. Gargantua is the main access point for the northern section. To hike the whole route you’ll need to hike north of Gargantua a few kilometres to get to Warp Bay or Chalfant Cove, and then back to Gargantua. This is the only “easy” section, following a fairly flat, forested trail.

As you trek south of Gargantua for the remaining 55 km, the trail is challenging. For the most part, the trail hugs the coast of Superior, taking you over rocky headlands and boulder beaches. The trail does veer inland periodically, through a forest lush in ferns and mosses, but one rarely loses sight of the lake for long. The southern half of the trail, where the trail gets close to Hwy 17, is not as up and down as the northern part, but there are still some challenges. Boulder-hopping can be precarious, especially with a backpack and even more so when wet. My first experience on the Coastal Trail was during three rainy days and “slippery when wet” cannot be overstated.

How long does it take to hike the Coastal Trail?

Like most other trails, it depends on your experience, but along the Lake Superior coast, weather is a major factor. This is not a trail where you can expect to cover your normal xx km/day. One 5 km section is not like the next 5 km, and some sections are more challenging than others.

Much of the trail goes over rock and when conditions are wet, due to rain or fog, expect to slow your normal pace (did we say “slippery when wet?”). This is a linear trail, so if you want to hike from end to end, you can arrange a shuttle with one of several local businesses. While some hikers prefer not to retrace their route, I find that the return trip gives you a completely different view.

Camping on the coast

Camping along the coast of Lake Superior is an experience in itself. Located in one of the best areas of dark night skies, you will be treated to the most expansive star show imaginable. Campsites along the coast are used by hikers and paddlers. Located on sandy beaches, cobble beaches and rocky outcrops, some campsites are a little more rugged than others, but all have a tent area, fire ring and backcountry privy. Most popular are the fine sand beaches at Warp Bay, Gargantua Harbour, Beatty Cove and Barrett River.

Life on the lake To gaze out over the blue horizon of this great lake is truly impressive. Lake Superior has the largest surface area of any freshwater lake on the planet. It has a reputation for its storms with powerful forces that continue to rework the shoreline. Lake Superior can be windy and wavy at any time of the year, but late summer and fall tend to have rougher conditions than earlier in the season. The lake can also be so calm that there is barely a ripple, particularly in the spring and early summer.

Visitors comment that the clear, turquoise waters look like the Caribbean – a quick dip may tell you otherwise. This lake rarely gets above bracing, but shallow bays can warm up, making a swim in Lake Superior waters one for the bucket list.

Start with a scouting trip Not ready to commit to hike the whole 65 km of the Coastal Trail?  Why not plan a day trip? Staggered access points make it possible to spend several hours to several days hiking the Superior shoreline.

The southern half of the trail, from Coldwater River to Agawa Bay, is closer to Hwy 17. Seek out the wild places

Whether you have a few hours, a full week, or the luxury of returning again and again, the Coastal Trail is a great way to explore the edge of the world’s largest freshwater lake.

After several days ambling up and down rocky ledges, boulder-hopping along the shore and searching for the next rock cairn or trail marker, you will start to feel like it is just you, the elements and one powerful lake.