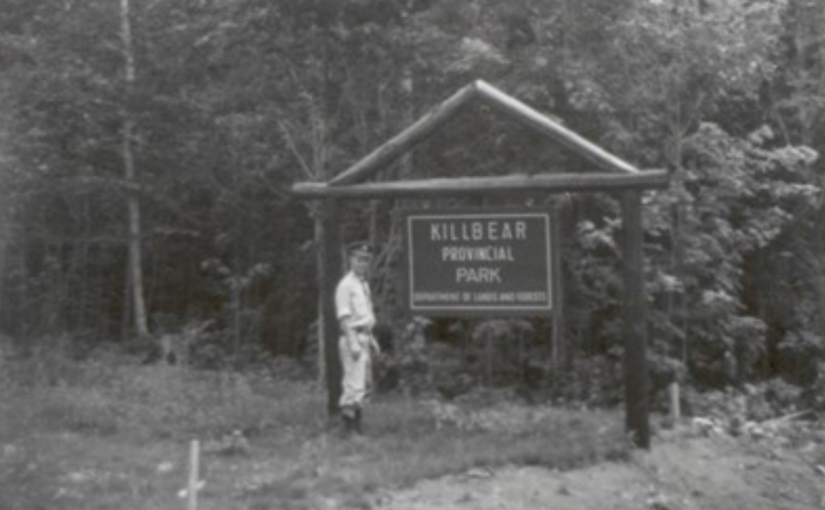 Well… it had to happen eventually!

Eddie started working at the park in 1959 and helped to build the roads and campgrounds before the park officially opened in 1960.

After a full career training countless staff and keeping the maintenance department ticking, Eddie decided to hang up his chainsaw for good last summer.

Hats off to Eddie and we wish him a long and healthy retirement!

When most people think of a career, they might think of working 30, 35, or perhaps even 40 years before enjoying a well-earned retirement.

Eddie Ramsay doesn’t subscribe to that point of view.

In a fitting tribute to his extraordinary career at Killbear, the main park road has been renamed the “Eddie Ramsay Parkway.” For him, working at Killbear is its own reward, and he looks forward to coming to work every day! When asked what he likes most about his work, Eddie says, “It’s the people I meet.” He loves meeting park visitors, and they love to meet him!

During most days in the summer, a park visitor will approach a staff member and ask if Eddie is still working. He’ll usually try and stop by for a quick visit to reminisce while on his rounds.

Eddie has a series of scrapbooks showcasing the history of the park, and he loves to point out the changes in the park!

Of course, he has fond memories of working for 30-45 years with Gordie Badger, Lynn Murphy, and Richard Charbonneau, three other long-term Killbear maintenance workers who have retired over the last 18 years.

Eddie loves working with the students. Over the past 62 seasons, Eddie has worked with and supervised thousands of junior rangers and summer students.

The fact that Eddie never seems to tire (and can still outwork many 17 year-olds!) has won him the respect of all staff members.

He is responsible for ensuring safe work habits in his crews and — by dint of his own example — has helped to instill a strong work ethic, attention to detail, and customer service in many new workers.

When Eddie says “good job” over the radio to a new worker, you know that person is going to be a great employee, no matter where they go.

Whenever former staff come back to visit the park, they always head up to maintenance to check in with Eddie. He will usually be able to remember something funny or extraordinary (or boneheaded) that they did five, 10, or 30 years ago.

Eddie Ramsay has seen a lot of changes in his 62 years at Killbear. His first paycheque was from the Department of Lands and Forest. Since then, he’s been part of Ministry of Natural Resources and now the Ministry of Environment, Conservation, and Parks.

When Eddie started working at Killbear in 1959, the park wasn’t even open!

He was part of the crew helping to build the campgrounds and roads in the park.

The way he tells it, Georgian Campground was a group effort. The maintenance staff would dump a load of sand on a proposed site, then give a shovel and a rake to the camper who was waiting and tell them to level it off.

While not exactly a snake lover, Eddie has come to grudgingly respect Killbear’s foxsnakes and rattlesnakes.

In the 1960s, one of his jobs was killing rattlesnakes in the park, but now he helps to protect them! The 2016 tv documentary Striking Balance — Georgian Bay includes a segment on Eddie and his changing attitude towards snakes at the park.

Credit where credit is due

Over Eddie’s long career, he has attracted some well-deserved attention with his amazing work ethic. He received a PRIDE award in 1999 and in 2010, he received an MNRF “Most Valuable Resource Award.”

Eddie is darn proud of working at Killbear all these years, and is an excellent ambassador for the park. He’s always willing to give a helping hand to other staff members or members of the public.

Ontario Parks has been lucky to have such a dedicated worker for all these seasons.