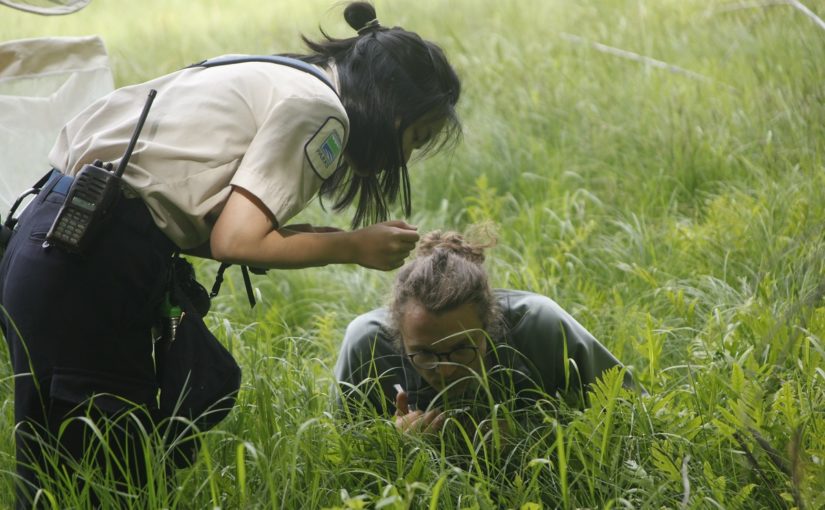 I didn’t know that it had been missing from my life, until I was introduced to it at the Killbear Bug Bioblitz on the weekend of June 9, 2018.

Over the weekend, eleven experts and seven natural heritage education staff at Killbear Provincial Park gathered to take a quick sample (a blitz!) of what kinds of insects live in the park.

This information adds to the park’s life science inventory, gives a better idea of what the park protects, and contributes to the greater knowledge of biodiversity in Ontario, Canada, and the world. The weekend was spent in activity day and night. Moths were attracted to white sheets with black lights and mercury vapour blubs – including our largest giant silk moth, the cecropia.

By the wetlands, we surveyed for aquatic invertebrates like dragonfly and damselfly larva, predaceous diving beetles,and backswimmers.

Out on the grassy areas, we looked for bumblebees. Through the meadows, grassy wetlands, and rocky points we netted dragonflies and damselflies. All the observations made at the Killbear Bug Blitz were added to iNaturalist – a crowd-sourced species identification app. You see them if you check out the Killbear Provincial Park Project on the iNaturalist website.

Sad you missed it?

Throughout the summer, Killbear staff will be running mini bug blitzes for park visitors – dip netting for aquatic insects, sweep netting for dragonflies, damselflies, and butterflies, and putting up black lights and sheets to attract moths.

We hope to inspire children and adults alike to observe insects, these incredible life forms that are all around us. Check with the weekly program schedule at the park when you arrive for details on the bug blitzes, happening all summer long. Too far from Killbear?

Bioblitz events are happening all over the province throughout the spring and summer. If insects aren’t your thing, most bioblitzes cover a wide variety of taxa groups. It is a fantastic way to increase your collective knowledge of our provincial parks and natural areas, as well as having the time of your life!

For more information on bioblitzes happening this summer in Ontario Parks, click here.