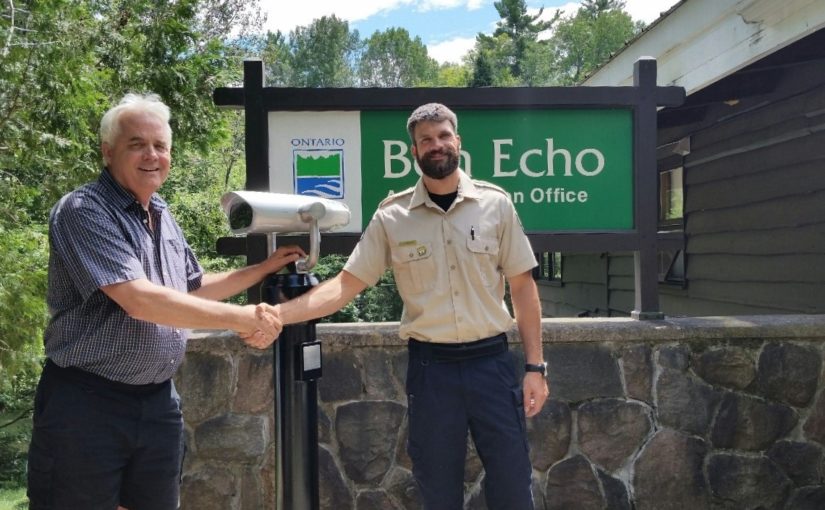 Today’s post comes to us from Heather Stern, a naturalist at Bon Echo Provincial Park.

Some of the oldest rock in the world.

Something that is carved.

Something made of wood.

These are only a few examples of the many things you can see from the Visitor Centre at Bon Echo Provincial Park, thanks to Rod MacKenzie with Hi-Spy Viewing Machines.

Mr. MacKenzie generously donated a beautiful, non-coin-operated (that means it’s free!) viewfinder to Bon Echo Provincial Park this summer. The viewfinder is positioned just outside of the Visitor Centre with a clear view of Mazinaw Rock, a 100 m tall cliff that is part of the Canadian Shield and over a billion years old.

The viewfinder replaces an old telescope that visitors previously used to see the Old Walt inscription that was carved into the face of the cliff in 1920 to commemorate the 100th anniversary of Walt Whitman’s birth in 1819.

Walt Whitman was an American poet who was most popular in the early 1900s. At one time, the letters of the inscription were painted with white paint which made it easy to read from across the lake. However, as the years passed this paint has worn away, making it a challenge to see.

With the help of the viewfinder, Old Walt’s words can be read once again just in time to celebrate the 200th anniversary of Walt’s birth next year.

The clever swivelhead design of the viewfinder also allows visitors to look at other aspects of the cliff, such as the ancient white cedars growing out of the side. These trees can live to be over 1,000 years old while only being the size of a small shrub!

One of the cedars on the cliff was found to be 941 years old when it died and was given the nickname “Silent Witness” because it would have lived through much of the human history of the area. This isn’t the first time Mr. MacKenzie has donated a viewfinder to a provincial park.

Back in 2014, Presqu’ile Provincial Park was the recipient of a 20X optical viewer which can be found in front of their scenic lighthouse on Lake Ontario.

The next time you are visiting Bon Echo, we challenge you to see how many different things you can now spy on Mazinaw Rock!