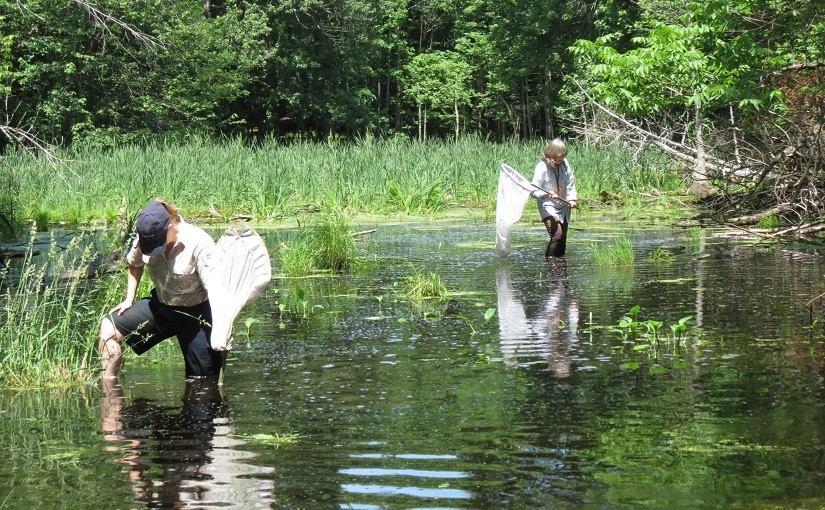 During the summer of 2015, several research projects were conducted at Murphys Point Provincial Park, but one in particular attracted the attention of staff and public alike.

With long-handled nets in hand, park staff — led by expert volunteer Bev Edwards — could be seen thigh-deep in the vernal ponds, streams and lakes located within the park.

What were they doing?

Surveying for odonates (that’s dragonflies and damselflies to most of us). Dragonflies dart around the wetlands with an agility to rival pretty much anything else, so it could be quite comical at times watching Bev and her many volunteers trying acrobatically (and sometimes not so acrobatically) to catch them for identification purposes.

Bev began surveying the park in late May and over the course of the summer, covered six main sites (five times each), as well as several incidental areas, accruing a total of 68 visits!

With the prior odonate inventory for the park standing at 62 species, Bev was able to add a very respectable nine species to the park list.

That’s certainly very impressive, but “what’s the point?”, I hear you ask

Well, several (actually seven) of the now 71 species identified as being present in the park are classified as either “vulnerable” or “imperilled” according to Ontario’s Natural Heritage Information Centre (NHIC).

Put another way, 10% of our dragonflies and damselflies are in need of support. Unfortunately, this phenomenon is not unique to the park. Odonates are under threat not only across Ontario but further afield as well. That’s where surveys such as these are vital to our understanding of the distribution and habitat preference of our dragonfly and damselfly populations.

Studying odonates not only provides important scientific data but it is also a great pass-time (and you don’t necessarily have to get wet!)

With just a net, field guide and hand lens, dragonflies and damselflies can be studied just about anywhere. If you have binoculars and a camera, you’re all set.

Several of our staff have now been “bitten by the bug” and get out in their free time. In fact, the only 2015 record of black-tipped darner came from the staff house when a mixed-species “swarm” of darners was seen on the front lawn.

Bev’s work has set a baseline, and we can now monitor population trends, and learn more about the habitat needs of individual species. It was fascinating for us to learn that some species prefer streams, others lakes. Some love the sun, while others prefer the shade. Some even migrate south with the birds when autumn approaches! It was also interesting to learn that simple preventive measures such as reducing pesticide use and refraining from altering shoreline habitats could go a long way to preserving many of our endangered species.

Why is it so important to study and protect our odonates?

Odonates are important predators in both terrestrial and aquatic ecosystems. Adults and nymphs prey upon a wide range of insects including mosquitoes and other biting insects. Nymphs are preyed upon themselves by fish and amphibians, whereas the adults are taken by a variety of birds, such as the eastern kingbird. (As an aside, the European hobby, a type of falcon, specializes in catching dragonflies.)

The nymphs are also indicators of the health of the ecosystem with different species showing varying degrees of tolerance to pollution.

Interested in finding out more about how to protect these incredible insects? Pop by the Murphys Point Visitor Centre and chat with a member of staff.

Not close to Murphys Point, but still want to contribute to the science of dragonflies? Share your sightings on OdonataCentral.