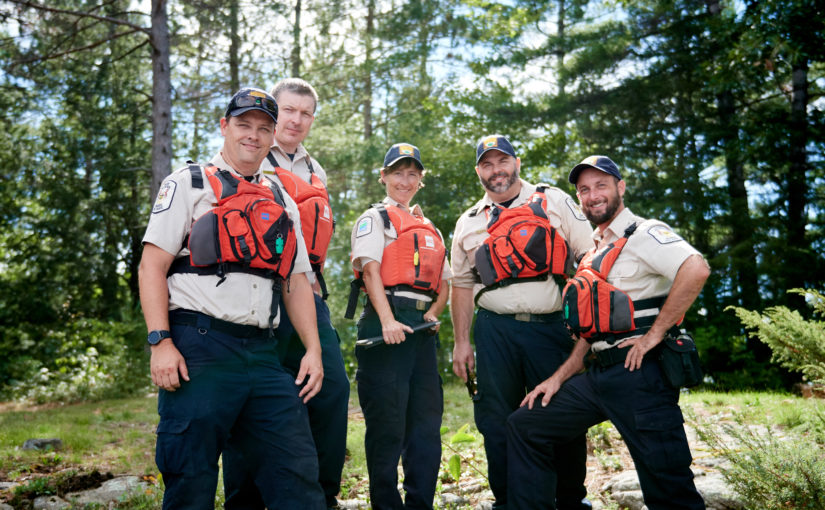 Over the course of 2018, Ontario Parks’ 125th Anniversary has inspired us to reflect on our past and to imagine our future. We thought it would be fun to think about what Ontario Parks jobs may be required as we move forward into our next 125 years!

When time travel becomes reality, Ontario Parks interpretive programs will be more experiential than ever! Park time travel guides would take you into the past to experience what it was truly like to be a voyageur at Samuel de Champlain or to see how the retreat of glaciers formed Kettle Lakes. Time travel guides would take you back to 1893 to the day that Algonquin officially became a provincial park and offer the experience of painting alongside members of the Group of Seven in Killarney!

Further, guides would take you into the future to discover how parks have stayed the same and how biologists use futuristic technology to continue to protect the species that call provincial parks home.

Night skies are important for protecting ecological and human health. Maybe a dark sky specialist is written in the stars for Ontario Parks’ future?

Ontario Parks dark sky specialists could work to increase the number of dark sky preserves in the province and develop educational programming to raise awareness on the importance of dark skies.

This year, park staff shared their thoughts on which creatures would overrun their parks by the year 2043; the consensus was that raccoons would be the bandits raiding parks!

Raccoon ranger may be a job needed for the future to help manage the predictions of raiding raccoons. Let’s prove this wrong: keep your campsites free of scraps and wildlife attractants, and leave your garbage secure at home. Perhaps canopy tenting will be the next glamping experience. Imagine solar-powered tents hovering over the forest canopy. Canopy tents would provide spectacular views and cloud-like comfort. Say goodbye to sleeping on the ground and wake up with the warblers!

In-park forest bathing guides could be a job title added to Ontario Parks’ roster to help visitors get back to nature and experience the healing benefits of spending time outside. With society becoming increasingly urban, regular contact with nature is more important than ever. Ontario Parks supports the world-wide movement of Healthy Parks Healthy People to promote and understand the link between a healthy environment and a healthy society. In good health and good time, forest bathing guides may be an Ontario Parks job of the future.

Why not have a master s’mores chef at each park that travels to each campsite via bicycle. Envision gourmet s’mores toppings such as caramel sauce, fresh blueberries, Nerds, M&M’s, peanut butter cups, and more! The master s’mores chef would teach you how to roast a perfect marshmallow with a self-rotating marshmallow stick equipped with sensors to let you know when your mallow will catch fire. The master s’mores chef would always leave you wanting s’more with this prime service. The campsite s’mores service would be provided for free to campers who contribute to citizen science during their stay.

Hovercraft operators would be required to fly Ontario Parks hovercrafts that mimic hummingbirds. The hovercrafts would be silent (so as not to disturb wildlife or campers) and extremely efficient, producing minimal wind output.

These futuristic hovercrafts would be compact to allow staff to access remote locations to conduct field work without trampling plants and disturbing sensitive ecosystems!

Hovercraft operators would also be responsible for responding to emergencies in the backcountry since the hovercrafts could traverse rugged terrain, portages, rivers, and lakes with speed and ease.

Get your bucket lists ready, imagine the number of parks you will be able to visit. Teleportation technicians would also assist park ecologists in safely transporting invasive species back to where they belong.

We certainly get by with today’s selection of emojis, but imagine life if we had an Ontario Parks emoji designer? You could express your park adventures with higher accuracy and style. Our past, present and future Ontario Parks trailblazers

No matter the job, it is with confidence that the staff of the future will perform their work with pride, dedication, and passion. Ontario Parks staff have been trailblazers over the past 125 years ensuring that the future of provincial parks is as bright as a summer sunset. A huge and hearty “thank you!” goes out to all past and present Ontario Parks staff for the incredible work they do.

What job do YOU think Ontario Parks will be hiring for in the next 125 years?