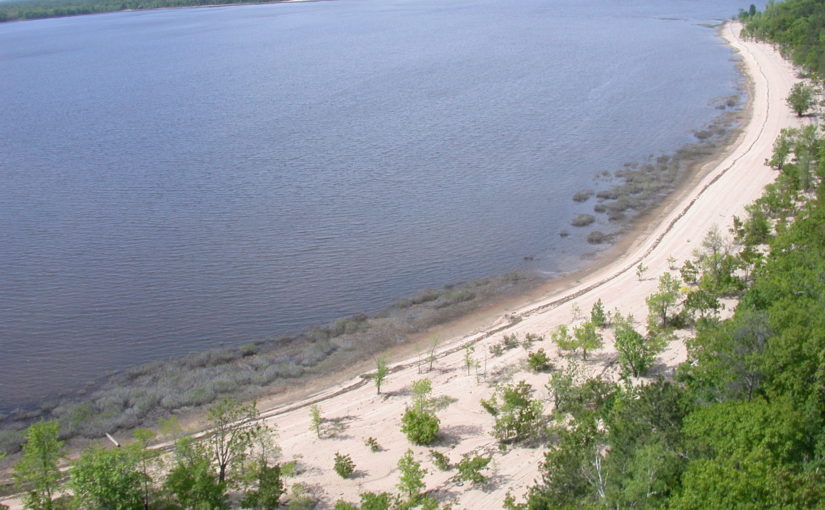 Our “Forever protected” series shares why each and every one belongs in Ontario Parks. In today’s post, Biologist Lauren Trute tells us Westmeath’s story.

Westmeath Provincial Park, located approximately 15 km from the City of Pembroke, is one of the most ecologically diverse provincial parks in Renfrew County.

This 610 ha park sits on the shore of the mighty Ottawa River, and offers a glimpse into the glacial history of the Ottawa Valley. This site was also likely an important stopover area for Indigenous peoples and fur traders travelling along the waterway.

Located in the rich sands of the ancient Ottawa-Bonnechere rift valley and formed by the flowing water of the Ottawa River, Westmeath Provincial Park is an evolving sand spit.

In glacial terms, the sand spit is relatively young at 5,000 years, and it’s still being formed. As the Ottawa River turns to flow almost straight north, it deposits sand. As the sand spit grew, several features were formed on the landscape, resulting in an interesting and ecologically diverse package in a relatively small area. The interior of Westmeath contains the oldest areas of the sand dunes, and has evolved into a mature upland forest with a mix of poplar, pine and oak. Closer to the park boundary and the municipal road, remnants of a Red Pine plantation and old mill site still influence the forest. Some of the most interesting vegetation occurs on and adjacent to the beach and active dune area, where trees and plants must survive exposure to the elements in the sand.

Poison Ivy occurs throughout the park and is abundant in many areas.

During fall migration, the sand flats are regularly visited by both Nelson’s Sparrow and Le Conte’s Sparrow, as well as a variety of shorebirds.

The waterfowl are plentiful in spring, and migrating Rusty Blackbirds can be observed in the lowland woods and wet areas. Signs of Black Bears, White-tailed deer, beaver and muskrat are common. Along the beach you may catch a glimpse of one of several species of Tiger Beetle hunting insects on the sand. Maybe even the tracks and nests from a Snapping Turtles or Northern Map Turtle!

When venturing into the water, schools of small catfish and bass are taking refuge in the tall sedges and the abundance of freshwater mussels (a main food item for the Northern Map Turtle).

As part of the treaty negotiations currently underway, the Algonquins of Ontario have identified Westmeath Provincial Park as an area of historical and cultural significance within their territory.