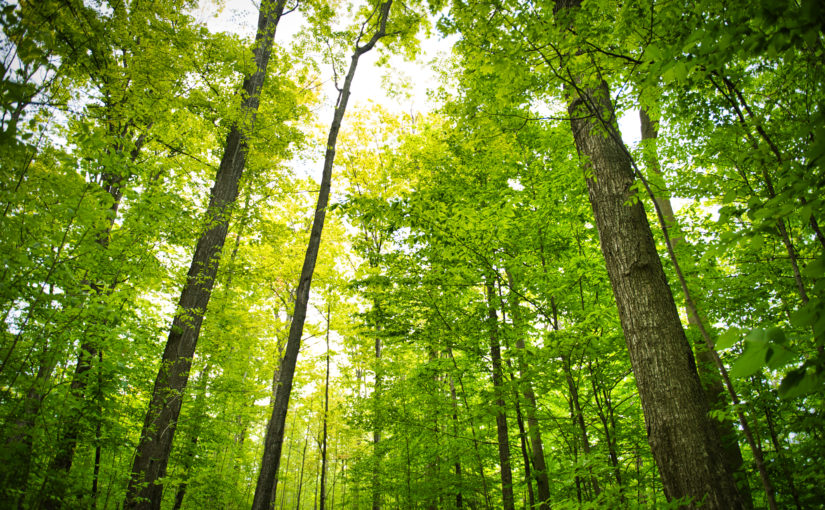 For almost two centuries — as the area around Mark S. Burnham Provincial Park turned from wilderness to farm fields, and eventually, to a bustling city — the trees within its boundaries have remained relatively untouched.

This lack of development is a rare phenomenon in southern Ontario. The ecosystem within has been able to thrive and provide habitat for a variety of species, becoming one of the best-preserved old-growth forests in the county. The Peterborough Drumlin Field is an area of about 5,000 km2, making it one of the largest of its kind in North America. It contains approximately 3,000 well-developed drumlin ridges.[1]

Drumlins are large hills — shaped like an upside-down spoon or a teardrop on its side — which were created by retreating glaciers.

The drumlin consists of sand, gravel, and glacial till deposits. You can even tell which way a glacier was moving based on the formation of the drumlin. In this case, it shows ice moving from the northeast.

Mark S. Burnham holds just one of these hills, but the elevation change it creates has shaped the forest around it. The old growth forest is divided into two dominant stands of trees due to this geological feature.

To the west is a lower, swamp-like area, filled with coniferous trees such as Hemlock and Cedar. Like most coniferous-dominated areas, the forest floor is covered with very little vegetation due to the acidic nature of these plants.

To the east, on top of the drumlin, you’ll find the deciduous side of the park. Beech, ash, and maple trees cover the sky with their full canopies, while the ground below is covered with plants and shrubs, including Jack-in-the-pulpit, Prickly Gooseberry, and Northern Maidenhair Fern.

In Ontario, you’ll find two different species of flying squirrels: northern and southern. Until recently, the Peterborough area seemed to only be home to Northern Flying Squirrels[2], but studies show that they are now joined by populations of Southern Flying Squirrels.

It appears that consistently warmer winters and an abundance of food have allowed for the Southern Flying Squirrel to increase its northern range by an additional 200 km.

They have also broadened their desired habitat. Southern Flying Squirrels usually prefer large connected wilderness spaces, but populations are increasing in isolated woodlots, like those found in Mark S. Burnham and Peter’s Woods provincial parks[3] — a first for this volant (flying or gliding) species!

[2] Stabb, M. 1988. Report on the status of the southern flying squirrel
Glaucomys volans in Canada. Committee on the Status of Endangered Wildlife in Canada, Ottawa, Ont