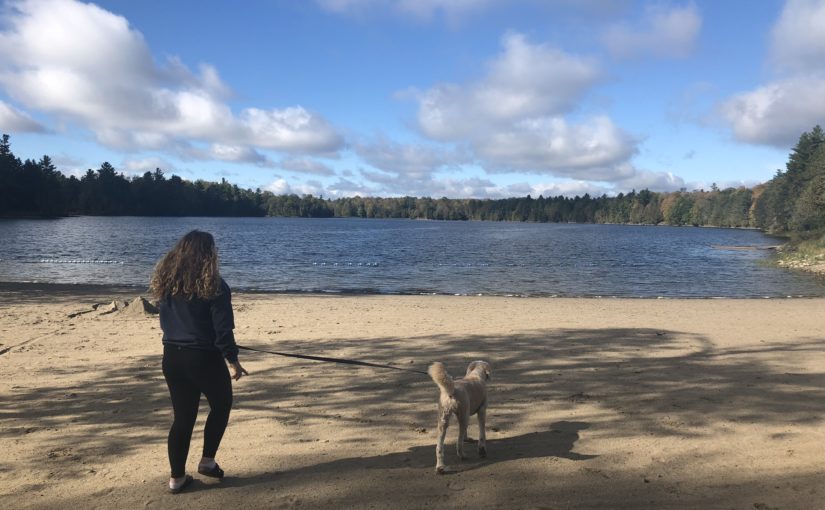 Today’s post comes from Candace Sampson of Life in Pleasantville. Last summer, we invited Candace to document her adventures in four provincial parks. If you’re new to RVing and thinking of giving it a shot this year, this post is for you.

When first planning a trip with Ontario Parks to learn more about our beautiful provincial parks, I was married with a motorhome and had someone to drive it.

By the time the trip rolled around a few months later, I was down one husband, one motorhome, and one driver (the first and last being the same person). My life had basically become a country song, and I really wasn’t loving the tune.

At that point, I would’ve rather booked myself a root canal than continue with this trip. Simply put, I didn’t think I could do it. There are few things in life more terrifying to me than parallel parking. It’s a spatial awareness thing, but to put it in perspective, there could be room to park ten cars and I would still be terrified of hitting something.

Now I would be expected to park a 21-foot motorhome, surrounded by trees, people, and small woodland animals.

The pressure was enormous.

I had two choices: cancel the trip with Ontario Parks or face my fears and do it on my own.

As a role model to my two teen daughters, cancelling wasn’t really an option.

Cancelling would have said that I couldn’t do this on my own – or worse, that I needed a man in my life to be able to be adventurous. There was no way on earth I was going to model anything but independence for my girls. So I puffed out my chest, sucked up my fears, and rented an RV.

I am woman, hear me roar

As the days until our trip dwindled, my roar became more of a whimper. What had I got myself into? We were way past the point of getting money back on the rental, and my teen daughters were routinely reminding me of that one time I hit the roof of the car in a parking garage, or that other time I deftly pulled a twenty-point turn to get out of a parking spot. My confidence levels were taking a hit, but I would not give in.

The day we left, I spent an hour going over the RV with the owner. It operated much like an automatic car, so that part was easy. He explained the septic system and how to operate it, but I assured him that we would just use the facilities at the campgrounds. My goal was simple: drive an RV around Ontario to four provincial parks without killing anyone.

Emptying a septic tank seemed like a stress I didn’t need.

A point of pride

Our first destination was Murphy’s Point Provincial Park, which Google Maps indicated was 1.5 hours from our front door. Google Maps, however, did not take into account that I wouldn’t be driving over 80 km an hour. or that frequent stops to get my anxiety in check would be required. Something interesting happened after I successfully parked and set up camp at Murphy’s Point: my confidence soared. I had just done what I thought couldn’t be done.

Although the RV was much bigger than my car, I drove slowly, talked to myself the entire time I was driving, and was surprised to find that I was actually enjoying it. Brimming with confidence, I even announced that the bathroom on board was open for business.

Use it at will, ladies; your mother is on a roll.

A reversal of fortune

All went well until we arrived in Charleston Lake Provincial Park and I was told that we did not have a pull-through site. This spot would require me to back in.

Turning to my daughters, I said, “Well I guess that’s it. We have to go home now,” half wincing, half laughing, and almost totally unhinged. I drove towards the site 90% convinced that when I got there, I would wrangle some unsuspecting male to park us. But something in me wouldn’t allow it. I had come this far and was going to see it through.

Even at the risk of total humiliation, I am no quitter.

Slowly, methodically, with my tongue firmly planted out the corner of my mouth, I backed the RV into its designated spot without harming so much as a blade of grass. To many, this is a minor accomplishment, but to me it felt like I had conquered Mount Everest.

My daughters were duly impressed, and I can’t say for certain, but I’m pretty sure even the dog was proud of me.

We celebrated with hot dogs and s’mores (over the fire that I started, thank you very much).

As with everything in life, it’s important to ask yourself what you’ve learned after facing a fear head on. I learned three things from this experience:

1) Ontario Parks are so beautiful they were worth getting over the fear of driving an RV.

2) After successfully driving an RV and emptying septic tanks, I feel that I may even attempt parallel parking.

3) I now know that my life is actually more like a rock n’ roll song – and that I’m the one writing the lyrics.

Check out Candace’s list of 10 camping gems you don’t want to miss.