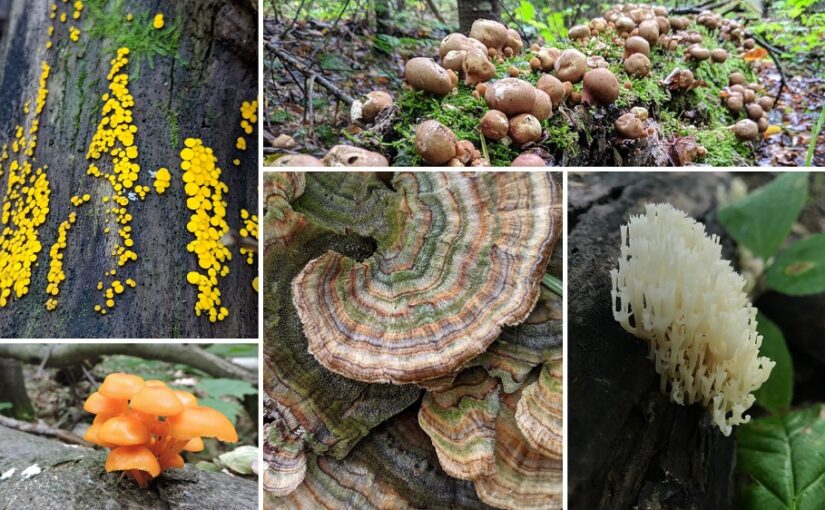 `From yeast fungi (responsible for leavening bread) to mold (we’ve all forgotten about food for just a little too long), the world of fungi is a large and fascinating one.

But the role fungi play in our natural environment is perhaps one of the most important roles of all.

Have you ever wondered how old tree stumps break down and are slowly reclaimed by the forest floor? Or how plants are able to obtain water and nutrients essential for their survival?

The answer is fungi.

Fungi are the powerhouses of forest ecosystems. They are the best wood decomposers found in the natural environment and form relationships with nearly 90% of the world’s land plants

At Frontenac Provincial Park, over 700 species of fungi have been identified in our forests.

Let’s find out some interesting facts about a handful of them:

Gilled mushrooms are a distinctive, yet diverse, group of fungi that include the stylized mushrooms of our childhood, such as the fly agaric of fairy tales.

They are characterized by spore-producing gills found on the underside of the cap.

Like all mushrooms, the ‘fruiting body’ is the part you see aboveground. Its sole purpose is to spread spores. With gilled mushrooms, the increased surface area allows for a massive increase in the production of spores. The chances of any one spore landing in the right location and becoming a new mushroom is remote, so mass-production is the key. Each of the following groups employs variations on the theme.

When fresh, this little beauty is one of the easiest gilled mushrooms to identify. It’s hard to miss the Orange Mycena’s distinctive bright orange caps and stalks. It grows in dense clusters, and only on decaying hardwood.

Its namesake colour eventually fades to pale orange or nearly white. Fortunately, the edges of the gills remain bright orange.

A bolete is any mushroom with a cap and stem, soft tissue (not woody or leathery), and a tube layer on the underside of the cap that can be easily separated from the rest of the cap’s tissue.

Each tube produces millions of spores that free fall until they exit the tubes and are carried away by air currents.

With any luck, some of these spores will land in ideal conditions and ultimately produce new mushrooms.

Although it may look in an advanced stage of decay, this Old-Man-of-the-Woods is in its prime.

Of the dozens of bolete species found in the park, this is without a doubt one of the most unusual looking.

Old-Man-of-the-Woods, like most boletes, form symbiotic relationships with the roots of various tree species, but will also partner with plants such as grasses, wildflowers, and shrubs.

Bracket fungi, also known as shelf fungi or polypores, can assume a variety of shapes and textures.

Most species have a leathery or woody texture (although a small number of common species are soft) and jut out from the sides of trees, stumps, or logs in a shelf style.

Some polypores have a mushroom-like appearance, but differ from boletes by their tough, leathery texture. Others form a flat layer on the underside of twigs or branches.

Some species of polypore are annual, decomposing at the end of the season. Others are perennial, surviving for more than one year and producing spores every year.

All of these types of fungi have tubes on the underside of the fruiting body where spores are produced. The tubes can be shallow or deep depending on the species.

The frequently encountered Turkey Tail gets its name from the concentric zones of colour, similar to the pattern on a turkey’s tail feathers. These zones can be white, brown, reddish-brown, cinnamon, buff, orange, green, blue, and grey.

That’s where this colourful mushroom gets its species name, versicolor (Latin for “varied colour”).

A wood decomposer, Turkey Tail grows in overlapping clusters, or rosettes, on dead hardwood logs and stumps, and occasionally on dead conifers.

Both species can sometimes have green algae, or even patches of moss, growing on the upper surface.

Unlike gilled fungi and boletes, puffballs lack a spore-producing cap, developing their spores inside their fruiting bodies instead.

When a fruiting body matures (i.e., has produced its spores) it forms a small opening on top called an apical pore.

When falling raindrops crash into the fruiting body, the body is compressed, causing the spores to be ejected out the pore. The spores are then dispersed by air currents.

Of the dozen or more species of puffballs found in Frontenac, Pear-shaped Puffball is by far the most common.

A wood decomposer, it often grows in dense clusters on rotting logs and stumps.

Fruiting bodies can be pear-shaped or somewhat round, and start out nearly white in colour, eventually becoming tan or red-brown.

Jelly fungi get their name from their irregularly shaped fruiting bodies that resemble the consistency of jelly.

The spores are produced in microscopic structures on the upper surface of the fruiting bodies.

This commonly occurring jelly fungus is quite easy to identify.

When fresh, this fungus is bright orange. It is harder to spot during extended periods of dry weather when it shrinks in size, becomes tough like a horn, and turns reddish-orange.

Once it rains again, it resuscitates and reverts back to its fresh jelly-like state.

Orange Jelly grows on conifer logs and stumps where its fungal threads break down the wood for food, helping recycle nutrients that other organisms can eventually use.

Orange Jelly is sometimes mistaken for the much less common Witch’s Butter (Tremella mesenterica), but the latter species grows only on dead hardwood branches.

Orange Jelly also has a small core of whitish tissue near the point of attachment to wood, while Witch’s Butter does not.

Cup and disc fungi are quite similar in appearance.

Cup fungi, depending on the species, have either a shallow or deep-sided bowl, whereas disc fungi lie flat. Some species within each group have short stalks, while others are stalkless.

To reproduce, spores are forcibly ejected from microscopic sac-like structures lining the inner surface (cup fungi) or top surface (disc fungi) of the fruiting bodies. Once the spores are discharged, they are carried away by air currents.

These attractive fungi are quite tiny, a mere 1 to 3 mm wide, and can be cup, saucer, or disc-shaped.

Despite their diminutive stature, they are easy to spot because they often occur in clusters of hundreds.

You’ll find them growing on barkless (decorticated) logs, stumps, and branches of hardwoods, where they are helping to decompose the wood.

Other distinctive species of fungi with a cup, saucer, or disc shape include Eyelash Cup (Scutellinia scutellata), which ranges from bright red to orange and has “eyelashes” lining the rim.

Another is a turquoise-coloured species that goes by various common names including Green Wood Cup, Green Stain, and Blue Stain (Chlorociboria aeruginascens). Both of these species are occasional to common.

If you do happen to spy fairies drinking out of Yellow Fairy Cups, don’t forget to let park staff know!

Throughout all the astounding variety of colours, sizes, and shapes of fungi, there are even some that resemble miniature corals.

Almost all of Frontenac’s species of coral fungi grow on the ground, save for this next species which is fit for a queen.

One of the park’s most frequently encountered coral fungi, and arguably the easiest to identify, is Crown-tipped Coral. This mushroom sports a regal ring of tiny finger-like projections at the tip of each branch, which gives them a crown-like appearance. You’ll have to look very closely to spot this unique feature.

Look for the Crown-tipped Coral growing on well-rotted logs and other woody debris of hardwoods.

What fungi will you find?

The theme for this year’s Frontenac Challenge is fungi.

We encourage everyone to keep an eye out for different types of fungi while hiking this fall.

Please remember to only take photos of your fungal finds, as foraging for mushrooms is prohibited in provincial parks.

Be sure to add your sightings to iNaturalist to help grow our knowledge of the incredible species that call Ontario Parks home.